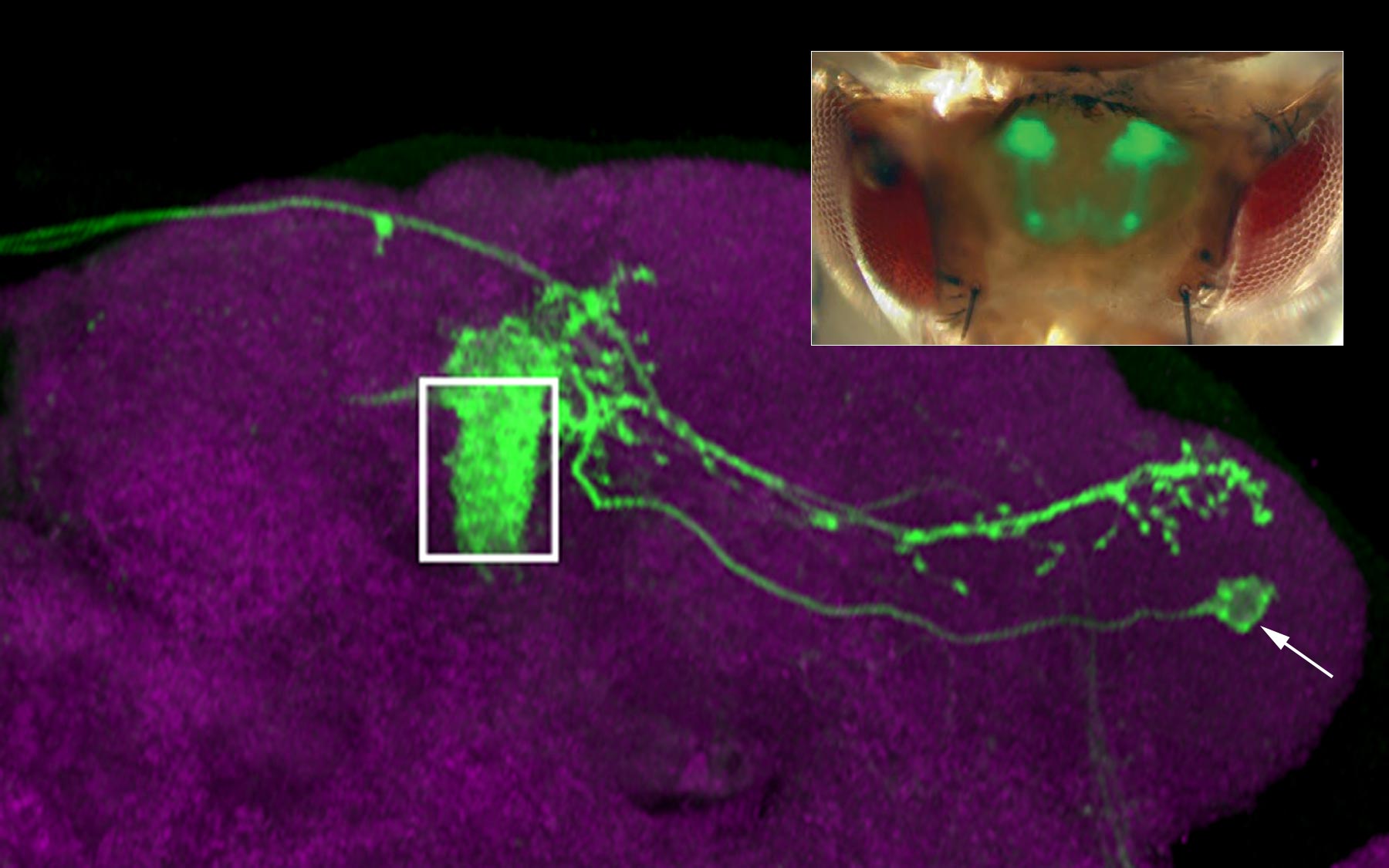 Image shows path traced by 1 of 34 cells—called mushroom body output neurons (MBONs)—present in every fly brain (the brain is stained purple). A CSHL-led team finds that collectively, MBONs help individual flies register and act upon their preferences for various smells. The white arrow indicates the tiny cell body, or soma, of a single MBON; the dendrites that enable it to receive information from other neurons in the mushroom body are concentrated within the white box, in the mushroom body’s central “stalk;” the brighter of the two green lines tracing back to the area around the soma is the axon, which conducts the MBON’s signal to other cells. INSET: composite image showing location of the mushroom body (green) in the fly’s head.
email envelop icontwitter icon share buttonfacebook icon share buttonlinkedin icon share button

Responding appropriately to the smell of food or the scent of danger can mean life or death to a fruit fly, and dedicated circuits in the insect’s brain are in place to make sure the fly gets it right.

Cold Spring Harbor, NY — Responding appropriately to the smell of food or the scent of danger can mean life or death to a fruit fly, and dedicated circuits in the insect’s brain are in place to make sure the fly gets it right.

In studies designed to better understand how the brain processes information, scientists led by Cold Spring Harbor Laboratory (CSHL) Associate Professor Glenn Turner have identified an important component in these circuits: the point at which incoming sensory information begins to be transformed into a neural signal that instructs a fly’s response. The cells, called mushroom body output neurons (MBONs), appear to distill nuanced information about an odor into clear instructions: approach or flee.

By genetically labeling and following the activity of the same MBONs in multiple flies (there are precisely 34 in each brain, situated in known locations), the scientists found that each cell had a characteristic response pattern in each individual. The pattern, in other words, differed between flies. This suggests that MBONs may underlie individual odor preferences that develop as flies learn to associate smells with positive or negative experiences.

Mushroom body output neurons were discovered last year by Turner’s collaborators, Gerald Rubin and Yoshinori Aso, at the Janelia Research Campus of the Howard Hughes Medical Institute. As their name implies, the cells are located in the mushroom body, a part of the fruit fly brain critical for learned responses to sensory stimuli. The mushroom body itself is composed of roughly 2000 neurons that transmit information about smells that have been detected by the fly’s sensory neurons—and on the receiving end of these transmissions are just 34 MBONs. A fly’s behavioral response to an odor depends on the message that these output neurons relay to neurons farther along the circuit.

Toshihide Hige, a postdoctoral researcher in Turner’s lab, measured how MBONs responded to 10 different smells—an assortment of potentially enticing food smells, like yeast and vinegar; aversive smells such as citronella; and more neutral aromas. Responses varied greatly between cells, with each cell most strongly attuned to certain aromas.

When the team analyzed the cells’ responses, some patterns emerged. In general, food smells elicited response patterns that were distinct from those elicited by repellant odors, suggesting that although mushroom body output cells probably don’t identify specific odors, they may communicate each odor’s most essential quality—whether it is “good” or “bad.”  This can be the basis for action—to pursue the odor or fly away from it.

In each fly, pairs of matched MBONs on opposite hemispheres of the fly brain, which could be identified both genetically and anatomically, shared the same response patterns. But when the scientists examined the corresponding cells in a different fly, they exhibited a whole new pattern of activity. That suggested that MBON sensitivities had been established through the past experiences of the individual flies being examined.

“As a fly lives its life and encounters a bunch of different odors, that olfactory experience may induce some plasticity in the circuit,” Turner says, explaining that this could allow a fly’s brain to adjust olfactory preferences.

To explore this idea, the team repeated their experiments, this time in flies that lacked a memory-related gene called rutabaga. MBONs in these learning-impaired flies still fired in response to odors, but the individuality of each cell’s response was lost. Activity patterns of each cell looked more or less the same in different animals. “It looks like plasticity—the result of particular experiences—is driving each of these output neurons to their own particular response properties, which are different for each individual fly,” Turner says.

These fly-to-fly differences in cell signaling reflect differences in olfactory preferences that are present not just in fruit flies, but also in humans, Turner notes. “We all have slightly different olfactory perceptions. I kind of hate the smell of durians [a tropical fruit], but my wife really likes the smell of durians. One person’s perfume is another person’s horrible stench.”

This work was supported by the National Institutes of Health, the Japan Society for the Promotion of Science, and the Uehara Memorial Foundation.