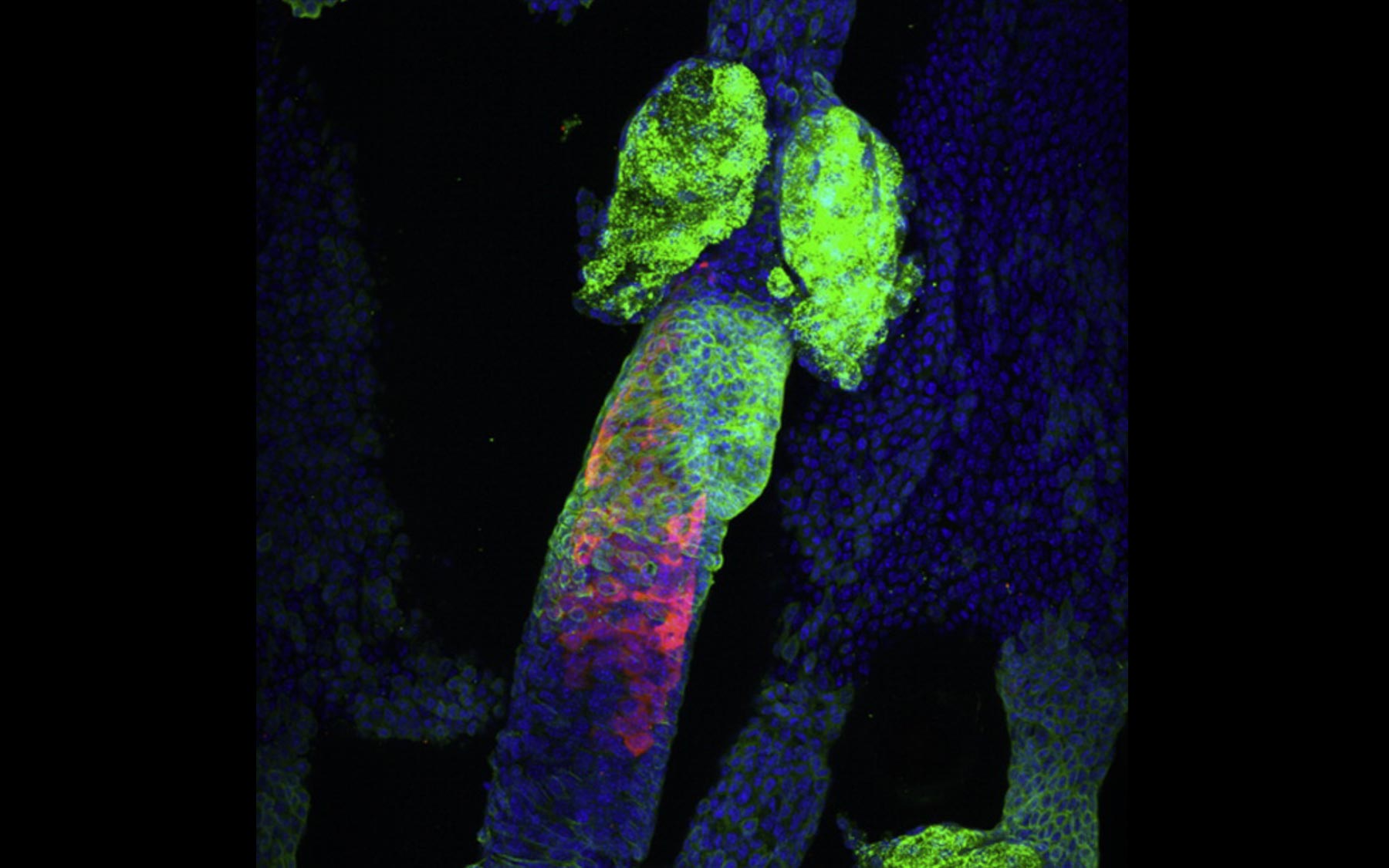 Cold Spring Harbor, NY — A constellation of different stem cell populations within our skin help it to cope with normal wear and tear. By constantly proliferating, the stem cells allow skin to replenish itself, allowing each cell to be replaced by a new one about once a month. But the normal cycle of division and death within one or more of these stem cell types can sometimes be derailed by genetic mishaps. Such events are believed to spawn carcinomas and other deadly skin cancers, which are the most frequently diagnosed cancers in the United States.

Researchers at Cold Spring Harbor Laboratory (CSHL) led by Associate Professor Alea A. Mills, Ph.D., have now unmasked a long-sought stem cell origin of carcinoma and identified the genetic lesions occurring within these cells that spur them on to malignancy. Her team has found that increased activity of a powerful oncogene called Ras combined with overly exuberant activity of a protein called ΔNp63α, stimulates the population of skin stem cells that produce keratin 15—one of many keratin proteins found in the skin—promoting carcinoma development. These findings appear online on February 4 in the journal Cell Stem Cell.

When cells in the skin or anywhere else in the body sense a potentially cancer-causing threat such as an activated oncogene like Ras—which speeds up cell division—the cells cope by slamming on the brakes to trigger a process called senescence. This is a tumor-suppressive mechanism that halts cell division while allowing cells to stay metabolically active.

“Unfortunately there are a number of genetic events that can bypass senescence and push a cell down the road towards cancer,” says Mills. The loss of a gene called p53, a powerful tumor suppressor, in senescent cells is one such event.

Mills’s group has long focused on p53’s sister gene p63, which she discovered during her postdoctoral years. As Mills found subsequently, adult mice that lack p63 age faster, implicating this gene in aging-related processes. Like the other genes in its family, p63 has the ability to produce different protein versions or isoforms. Each of the six p63 isoforms is prevalent in different tissues and performs different functions.

In the skin, for example, TAp63 isoforms are predominantly found within the inner layers known as the dermis, where they guard against the formation of cancers known as sarcomas. The ΔNp63α isoform, on the other hand, is found within stem cells of the skin’s outer layers—the epidermis—where it is essential for the cell proliferation needed for skin replenishment.

ΔNp63α has gained notoriety in recent years because it has been found to be present at very high levels in some types of human cancer, particularly squamous cell carcinoma, but is absent in other types of tumors, such as sarcomas. “This p63 isoform has been very perplexing,” comments Mills.

“It was well known that Ras activation drives cells into senescence, but we found that as it does so, it exterminates levels of ΔNp63α. So we wondered what would happen if instead, there were excessive levels of ΔNp63α—a situation akin to that observed in the clinic in human carcinomas.”

Mills’ team investigated this question both in cultured cells—cells that they prepared from mouse skin and propagated in the lab—as well as in living mice. When cultured cells in which the Ras oncogene was switched on were also made to produce high levels of ΔNp63α, the cells overcame senescence and started dividing. Transplanting these cells from the lab dish to the skin of live mice caused robust carcinoma formation.

To test ΔNp63α’s cancer-causing role in vivo, the scientists induced Ras mutations in living mice by painting their skin with a carcinogenic compound called DMBA. The mice soon developed papillomas—harmless, pre-malignant lesions that resemble warts. The cells within these lesions were arranged into two zones: a layer of proliferating, healthy cells; and a region of senescent cells that formed when Ras mutations accumulated and caused levels of ΔNp63α to be driven down.

But eventually, the levels of ΔNp63α were beefed up in cells within the senescent zone, and as a result, provided a way to escape from senescence. Armed with ample ΔNp63α, these cells divided rampantly, eroding the senescent zone and turning lesions that were once harmless into malignant carcinomas.

Although the reason for the eventual increase in ΔNp63α levels in senescent cells remains unknown, the team was able to elucidate the mechanistic basis of ΔNp63α-triggered bypass of senescence. The culprit is a protein called LSH, which is known to regulate gene activity by controlling the way the cell’s DNA is packaged.

“It appears that ΔNp63α is unshackling the cell from senescence by turning loose LSH, which in turn sets the stage for tumor progression,” explains Mills. “Our experiments explain why ΔNp63α and LSH are both present at higher levels in human carcinomas.”

“A clue to its cancer-causing potential was that when ΔNp63α was turned on in the context of activated Ras, the cells took on ‘stem-like’ features, which was especially intriguing because this does not happen when senescence is bypassed by other means such as p53 depletion,” according to Bill Keyes, Ph.D, a former postdoc in the Mills lab who is first author of this work and who now has his own research group at the Center for Genomic Regulation in Barcelona.

“The net effect was to maintain this epithelial stem cell population over a longer period of time,” says Mills. “This suggests that when present at high levels, ΔNp63α equips these cells with stem cell-like features, thereby giving them time to transform into cancerous cells.”

ΔNp63α is already being used as a pathological marker in the clinic to distinguish between cancer subtypes. “This study adds a new dimension to what we know about p63’s role in stem cell function and the contribution of its various isoforms in cancer,” says Mills. “It also adds new insight to the role of stem cells in cancer by showing that when more mature progenitors or committed cells accumulate genetic lesions that make them more stem-like, they tend to promote cancer.”