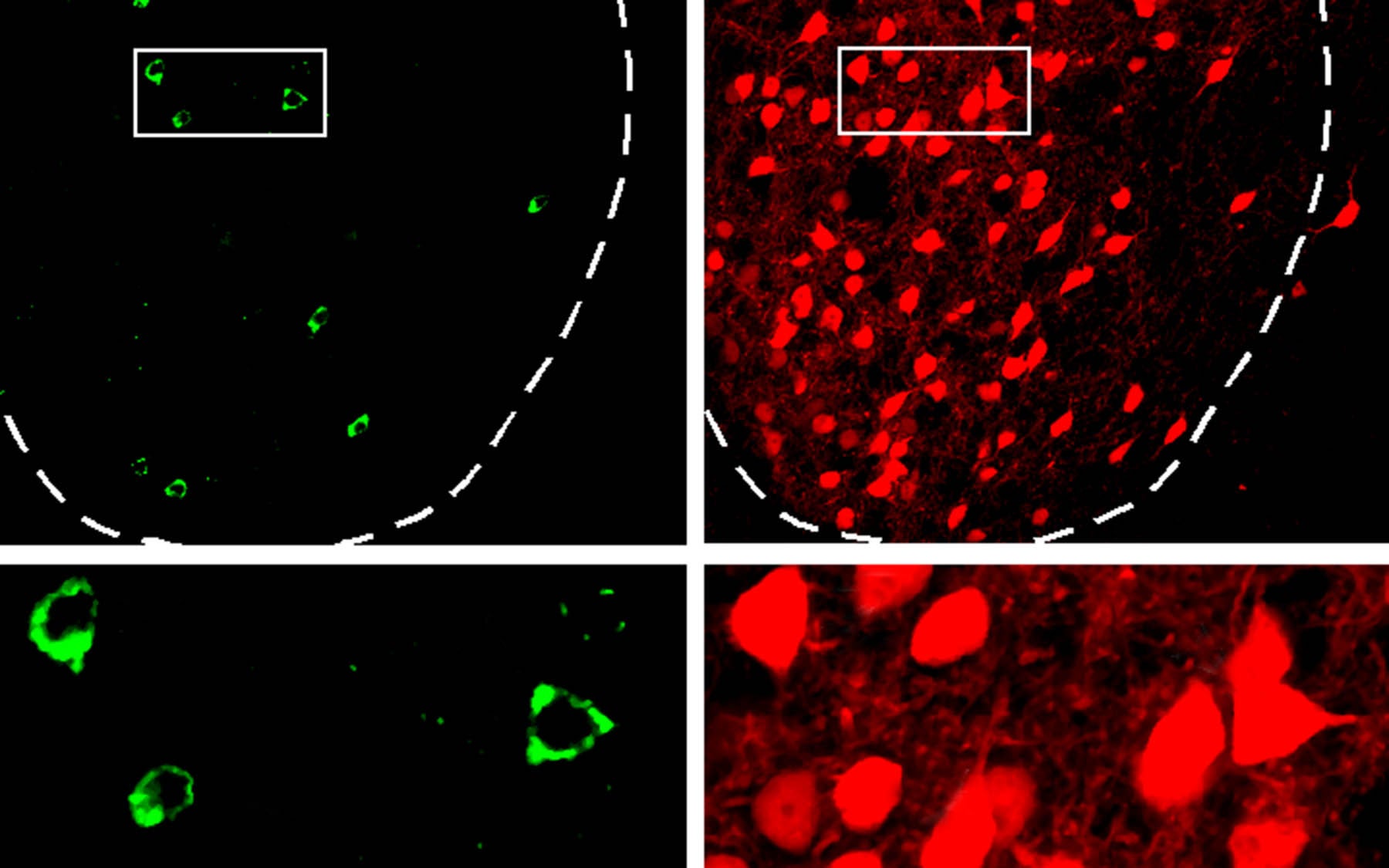 Cold Spring Harbor, NY — Fear is primal. In the wild, it serves as a protective mechanism, allowing animals to avoid predators or other perceived threats. For humans, fear is much more complex. A normal amount keeps us safe from danger. But in extreme cases, like post-traumatic stress disorder (PTSD), too much fear can prevent people from living healthy, productive lives. Researchers are actively working to understand how the brain translates fear into action. Today, scientists at Cold Spring Harbor Laboratory (CSHL) announce the discovery of a new neural circuit in the brain that directly links the site of fear memory with an area of the brainstem that controls behavior.

How does the brain convert an emotion into a behavioral response? For years, researchers have known that fear memories are learned and stored in a small structure in the brain known as the amygdala. Any disturbing event activates neurons in the lateral and then central portions of the amygdala. The signals are then communicated internally, passing from one group of neurons to the next. From there, they reach neurons in the brainstem, the action center for fear responses.

Last year, CSHL Associate Professor Bo Li and his colleagues were able to use new genetic techniques to determine the precise neurons in the central amygdala that control fear memory. His current research exploits new methods to understand how the central amygdala communicates fear memories to the areas of the brain that are responsible for action.

In work published today in The Journal of Neuroscience, Li and his team identify a group of long-range neurons that extend from the central amygdala. These neurons project to an area of the brainstem, known as the midbrain periaqueductal gray (PAG), that controls the fear response.

Li and his colleagues explored how these long-range neurons participate in fear conditioning. They trained animals to associate a particular sound with a shock, conditioning the animals to fear the sound. In these animals, the activity of the long-range projection neurons in the central amygdala became enhanced.

“This study not only establishes a novel pathway for fear learning, but also identifies neurons that actively participate in fear conditioning,” says Li. “This new pathway can mediate the effect of the central amygdala directly, rather than signaling through other neurons, as traditionally thought.”

The next step for these researchers is to apply this knowledge to models of PTSD. “We are working to find out how these circuits behave in anxiety disorders, so that we can hopefully learn to control fear in diseases such as PTSD,” says Li.

This work was supported by grants from NIH, the Dana Foundation, NARSAD, and Louis Feil Trust, as well as a Harvey L. Karp Discovery Award.

“Fear conditioning potentiates synaptic transmission onto long-range projection neurons in the lateral subdivision of central amygdala” appears online in The Journal of Neuroscience on February 12, 2014. The authors are: Mario A Penzo, Vincent Robert, and Bo Li. The paper can be obtained online at: http://www.jneurosci.org