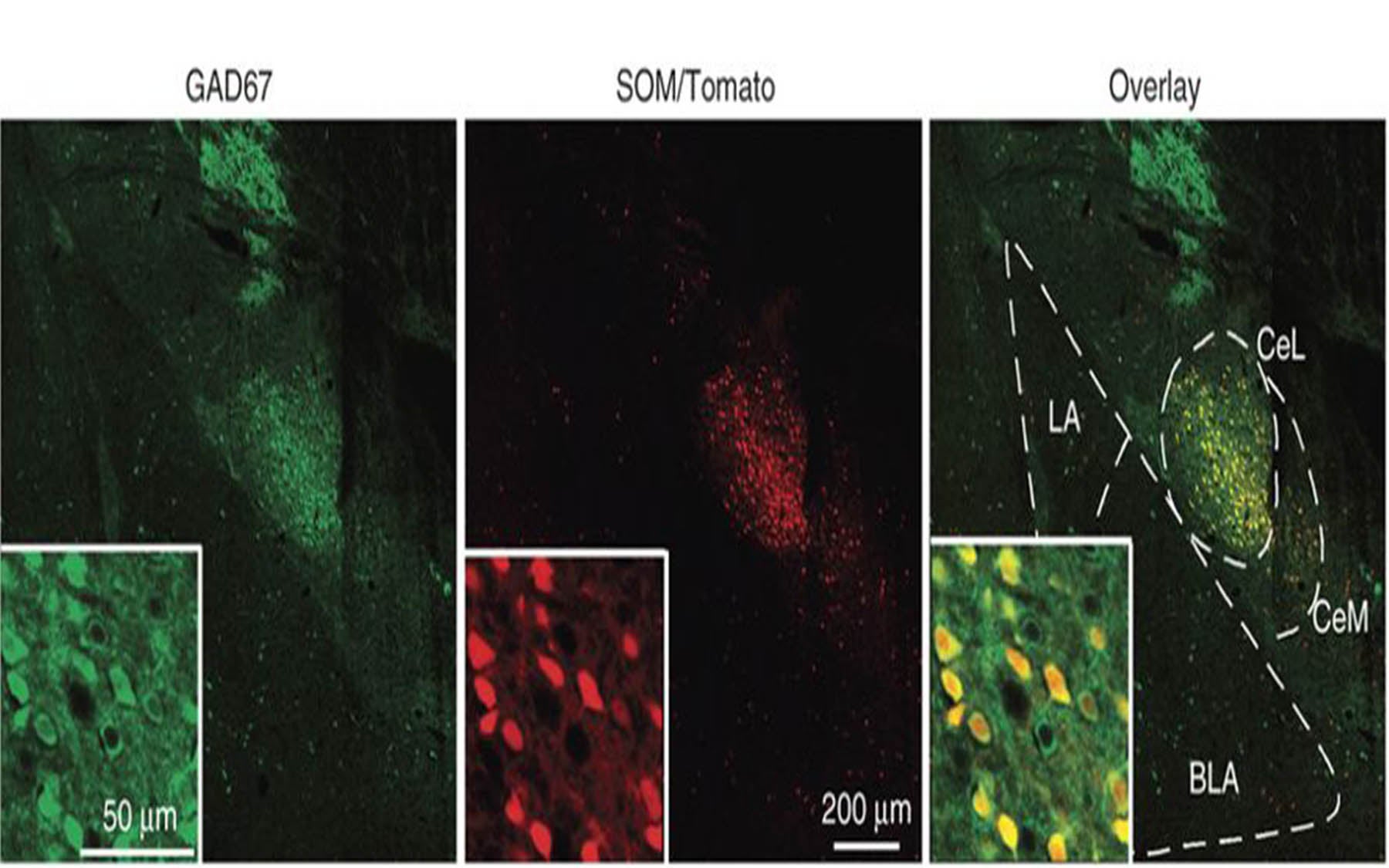 Cold Spring Harbor, NY — A rustle of undergrowth in the outback: it’s a sound that might make an animal or person stop sharply and be still, in the anticipation of a predator. That “freezing” is part of the fear response, a reaction to a stimulus in the environment and part of the brain’s determination of whether to be afraid of it.

A neuroscience group at Cold Spring Harbor Laboratory (CSHL) led by Assistant Professor Bo Li Ph.D., together with collaborator Professor Z. Josh Huang Ph.D., today release the results of a new study that examines the how fear responses are learned, controlled, and memorized. They show that a particular class of neurons in a subdivision of the amygdala plays an active role in these processes.

Locating fear memory in the amygdala

Previous research had indicated that structures inside the amygdalae, a pair of almond-shaped formations that sit deep within the brain and are known to be involved in emotion and reward-based behavior, may be part of the circuit that controls fear learning and memory. In particular, a region called the central amygdala, or CeA, was thought to be a passive relay for the signals relayed within this circuit.

Li’s lab became interested when they observed that neurons in a region of the central amygdala called the lateral subdivision, or CeL, “lit up” in a particular strain of mice while studying this circuit.

“Neuroscientists believed that changes in the strength of the connections onto neurons in the central amygdala must occur for fear memory to be encoded,” Li says, “but nobody had been able to actually show this.”

This led the team to further probe into the role of these neurons in fear responses and furthermore to ask the question: If the central amygdala stores fear memory, how is that memory trace read out and translated into fear responses?

To examine the behavior of mice undergoing a fear test the team first trained them to respond in a Pavlovian manner to an auditory cue. The mice began to “freeze,” a very common fear response, whenever they heard one of the sounds they had been trained to fear.

By implanting a very thin fiber-optic cable directly into the area containing the photosensitive neurons, the team was able to shine colored laser light with pinpoint accuracy onto the cells, and in this manner activate them. This is a technique known as optogenetics. Any changes in the behavior of the mice in response to the laser were then monitored.

A subset of neurons in the central amygdala controls fear expression

The ability to probe genetically defined groups of neurons was vital because there are two sets of neurons important in fear-learning and memory processes. The difference between them, the team learned, was in their release of message-carrying neurotransmitters into the spaces called synapses between neurons. In one subset of neurons, neurotransmitter release was enhanced; in another it was diminished. If measurements had been taken across the total cell population in the central amygdala, neurotransmitter levels from these two distinct sets of neurons would have been averaged out, and thus would not have been detected.

Li’s group found that fear conditioning induced experience-dependent changes in the release of neurotransmitters in excitatory synapses that connect with inhibitory neurons—neurons that suppress the activity of other neurons—in the central amygdala. These changes in the strength of neuronal connections are known as synaptic plasticity.

Particularly important in this process, the team discovered, were somatostatin-positive (SOM+) neurons. Somatostatin is a hormone that affects neurotransmitter release. Li and colleagues found that fear-memory formation was impaired when they prevent the activation of SOM+ neurons.

SOM+ neurons are necessary for recall of fear memories, the team also found. Indeed, the activity of these neurons alone proved sufficient to drive fear responses. Thus, instead of being a passive relay for the signals driving fear learning and responses in mice, the team’s work demonstrates that the central amygdala is an active component, and is driven by input from the lateral amygdala, to which it is connected.

“We find that the fear memory in the central amygdala can modify the circuit in a way that translates into action—or what we call the fear response,” explains Li.

In the future Li’s group will try to obtain a better understanding of how these processes may be altered in post-traumatic stress disorder (PTSD) and other disorders involving abnormal fear learning. One important goal is to develop pharmacological interventions for such disorders.

Li says more research is needed, but is hopeful that with the discovery of specific cellular markers and techniques such as optogenetics, a breakthrough can be made.

The research described in this release was supported by the US National Institutes of Health, the Dana Foundation and NARSAD (the Brain and Behavior Foundation).

“Experience-dependent modification of a central amygdala fear circuit” is published online in Nature Neuroscience on January 27, 2013. The authors are: Haohong Li, Mario A. Penzo, Hiroki Taniguchi, Charles D. Kopec, Z. Josh Huang, and Bo Li. The paper can be obtained online at doi:10.1038/nn.3322.