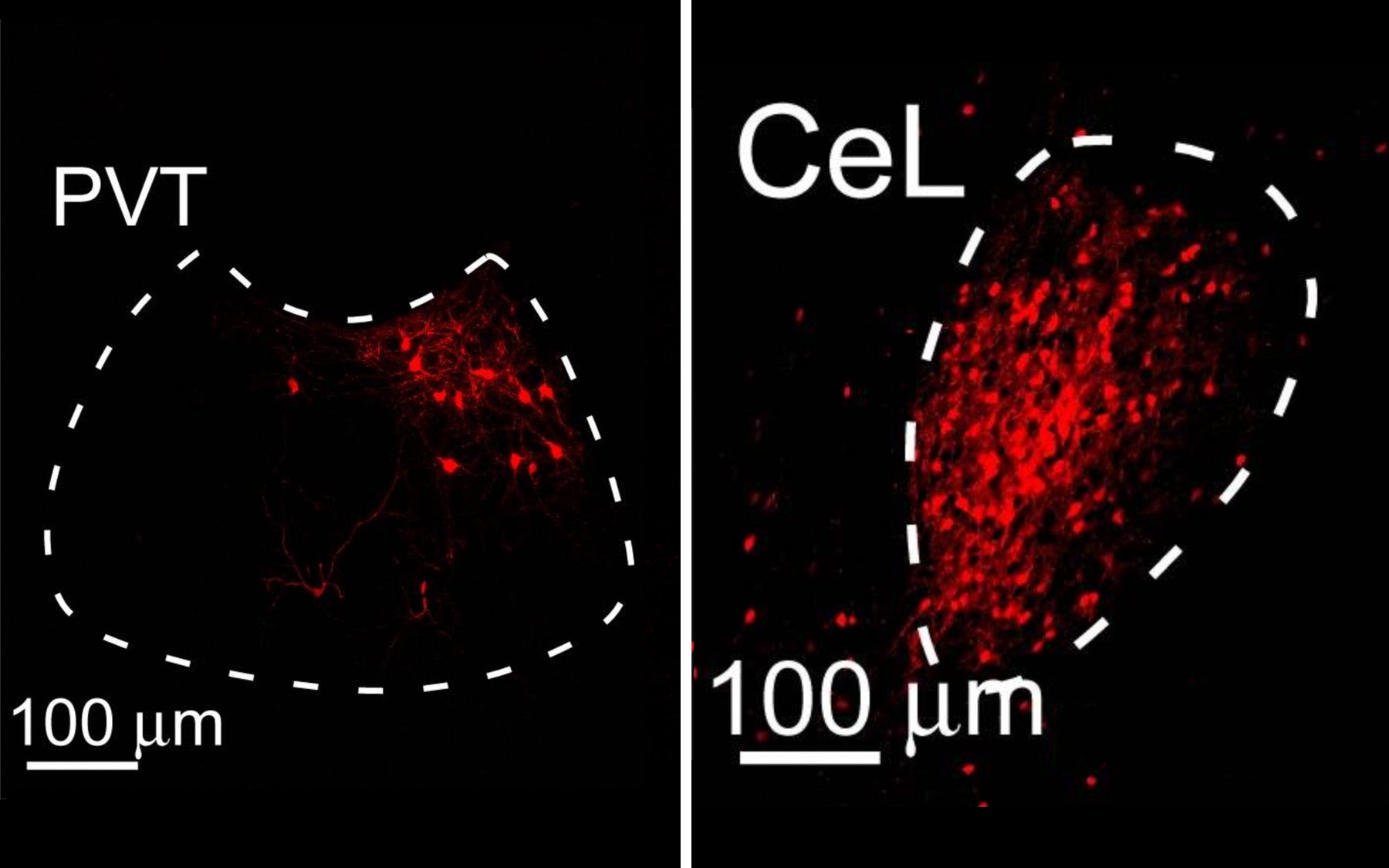 A team of researchers at CSHL has discovered a novel circuit in the mouse brain that controls fear. The red cells are neurons identified by a “trans-synaptic tracing technique”, which allows scientists to trace the neuronal circuit between two regions of the brain (shown here, called the PVT and CeL). Disrupting the circuit is enough to dramatically reduce fear, while strengthening the neuronal interactions can trigger an unwarranted fear response. The researchers suggest that this circuit represents an ideal target for new therapies to treat anxiety disorders.
email envelop icontwitter icon share buttonfacebook icon share buttonlinkedin icon share button

Cold Spring Harbor, NY — Some people have no fear, like that 17-year-old kid who drives like a maniac. But for the nearly 40 million adults who suffer from anxiety disorders, an overabundance of fear rules their lives. Debilitating anxiety prevents them from participating in life’s most mundane moments, from driving a car to riding in an elevator. Today, a team of researchers at Cold Spring Harbor Laboratory (CSHL) describes a new pathway that controls fear memories and behavior in the mouse brain, offering mechanistic insight into how anxiety disorders may arise.

It is hard to imagine that an intangible emotion like fear is encoded within neuronal circuits, but researchers have found that fear is stored within a distinct region of the brain. “In our previous work, we discovered that fear learning and memory are orchestrated by neurons in the central amygdala,” explains CSHL Associate Professor Bo Li, who led the team of researchers. But what controls the central amygdala?

One possible candidate was a cluster of neurons that form the PVT, or paraventricular nucleus of the thalamus. This region of the brain is extremely sensitive to stress, acting as a sensor for both physical and psychological tension.

As described in work published today in Nature, the researchers looked to see if the PVT plays a role in fear learning and memory in mice. “We found that the PVT is specifically activated as animals learn to fear or as they recall fear memories,” says Li. The team was able to see that neurons from the PVT extend deep into the central amygdala. Disrupting the connection significantly impaired fear learning.

Because the link between the PVT and the central amygdala is a critical component of fear learning, it represents an ideal target for potential drugs to treat anxiety disorders. But how is this link established? The researchers looked to data from people with post-traumatic stress disorder (PTSD) to identify chemical messengers that might connect the two structures. They focused on a molecule called BDNF that has been implicated in anxiety disorders. BDNF is a well-known neural growth factor that plays an important role in stimulating the birth of new neurons as well as new connections between neurons. Patients with anxiety disorders frequently have mutations in BDNF, suggesting that it might have a role in fear learning and memory.

The researchers worked to determine if BDNF plays a role in fear, and specifically if it affects the connection between the PVT and central amygdala in mice. They found that the addition of BDNF in the central amygdala acutely activates its neurons, triggering a fear response in animals that have not previously been exposed to a fearful stimulus, and promoting the formation of long-term fear memories. “We established that this is a regulatory circuit that controls fear in mice: BDNF is the chemical messenger that allows the PVT to exert control over the central amygdala,” Li explains.

The  results, he says, are consistent with what clinicians have seen and may help to explain some of the underlying pathology in patients. “Our work provides mechanistic insight into a novel circuit that controls fear in the brain, and provides a target for the future treatment of anxiety disorders,” says Li.

This work was supported by the US National Institutes of Health, the Dana Foundation, NARSAD, Louis Feil Trust, the Stanley Foundation, and a Harvey L. Karp Discovery Award.