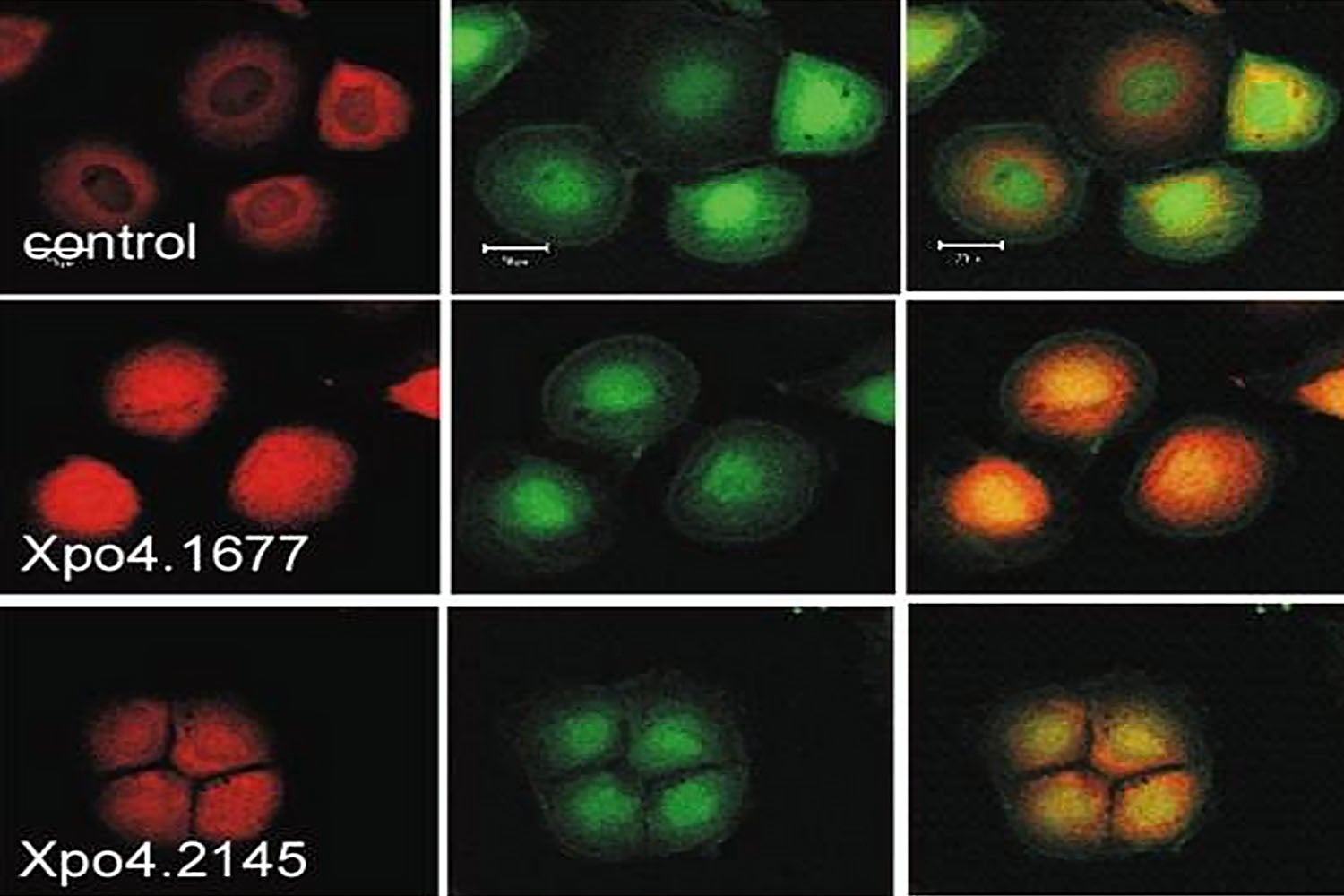 Cold Spring Harbor, NY — Over the years, hunting for cancer-related genes and understanding how they work has been an important, although time-consuming, exercise. At Cold Spring Harbor Laboratory (CSHL), five different research groups have now combined their expertise to speed up the rate of discovering cancer-related genes and validating their function in living animals.

The result of the collaborative effort is a large-scale, rapid, cost-effective genetic screen that in a preliminary test succeeded in uncovering 13 new tumor suppressors—genes that inhibit the activity of cancer genes. Tumor suppressors are important in cancer development generally, and specifically in liver cancer, where they frequently have been found to be missing in people who develop the illness.

These discoveries, published online ahead of print on Nov. 17 and scheduled to appear in the November 26 issue of Cell, “are a huge step forward in understanding the genetics of cancer and open up a host of new strategies to improve its diagnosis and treatment,” according to CSHL Professor Scott W. Lowe, Ph.D., the corresponding author of the study. Other authors include Scott Powers, Ph.D., Director of the Human Cancer Genome Center at CSHL, and CSHL Professors Gregory J. Hannon, Ph.D., W. Richard McCombie, Ph.D., and Michael Wigler, Ph.D.

Tumor suppressors are a crucial component of intracellular signaling networks that protect against uncontrolled cell proliferation. The benefits of such genes can be lost when DNA undergoes alterations, including mutations or deletions of entire stretches of chromosomes. A highly efficient genome-sequencing technique developed several years ago in the Wigler laboratory has made it possible to scan the genome of cancerous cells for, among other things, deleted portions of chromosomes where tumor suppressors are likely to reside.

Dr. Powers performed a genomic analysis of human liver cancer samples that provided a basis for the work of the combined teams. Powers’ lab scanned the genomes of liver cancers from more than 100 patients to compile a list of deletions of chromosomal regions. These regions were hypothesized to be the location of most of the missing tumor suppressor genes. A comparison of this list with the genome sequence of a normal human cell revealed the identity of approximately 300 genes within the deleted chromosomal segments.

Chromosomal deletions aren’t limited to cancer-related genes alone; any number of “passenger” or unrelated neighboring genes can inadvertently also be lost. The team, therefore, had to pinpoint the tumor suppressors among the 300 genes. “Genomic analysis of human tumors is important,” Powers observed, “but combining it with functional screening in mouse models is a notable step forward.”

The usual route of characterizing a gene’s function is to mutate it in mouse embryos and then create lines of mice that can then be examined for the mutation’s effects. Lowe’s group bypassed this step, which is time-consuming, by engineering mutations into the genome of adult mouse cells and then re-injecting these cells into adult mice. The team used a method honed by Dr. Hannon of introducing stable mutations into mouse cells via RNA interference, or RNAi, a technique in which small RNA molecules are introduced into cells to shut off specific genes.

RNA sequences that corresponded to all the 300 or so deleted genes were obtained from an RNAi “library” compiled by the Hannon lab. Lowe’s team introduced these RNAi tools (known as “short-hairpin RNAs, or shRNAs) into progenitor cells that develop into mature liver cells, albeit ones engineered to over-produce a cancer gene product called Myc.

In cells with these Myc mutations, an additional “trigger” such as the shutting off of a tumor suppressor gene via RNAi would be sufficient to cause cancer. The engineered cells that carried a Myc mutation and an shRNA were injected into mice. Dramatically, those that received cells in which a tumor suppressor gene had been “silenced” by an shRNA developed tumors within a month.

The scientists homed in on the identity of the silenced tumor suppressors by simply isolating and analyzing the genetic material from the tumors. Their strategy identified 13 new tumor suppressor genes, most of which had not been linked to cancer before.

A rich and unexpected payoff

“The nature of these new genes is not obvious and we wouldn’t have guessed their relationship to cancer if we hadn’t followed this approach,” says Lowe. “They may now allow us to make headway into poorly understood areas of cancer.”

The newly identified tumor suppressor genes affect a wide array of cellular activities, including maintenance of cell structure, cellular metabolism, cell proliferation, and control of the levels of various tumor growth-enhancing proteins in the cell’s nucleus. In one instance, the team’s strategy also uncovered not genes in isolation but an entire network of genes that go awry in liver cancer. “Given that the cancer puzzle involves multiple genes in various combinations, we need to find all the hits that make the cell tip over the edge,” says Lowe, explaining one advantage of his team’s broad strategy.

Some of the genes identified might also lead to new strategies for cancer therapy. For example, some of the newly discovered tumor suppressor genes “code” for proteins that are secreted, which indicates that their ability to prevent cancer is dependent on their presence outside the cell. Reversing the loss of such proteins—by replenishing their levels via injections—is an easier fix than having to correct a defect in the genome via gene therapy.

In other words, the CSHL team’s new strategy now makes it possible to rapidly filter from genomic information those genes that specifically impact cancer development in living animals, and thus focus follow-up studies on those that might be most clinically useful.

The status of autism research—in verse

CSHL Professor Michael Wigler drafted a poem explaining what we know and what we need to learn about autism.   Read more »