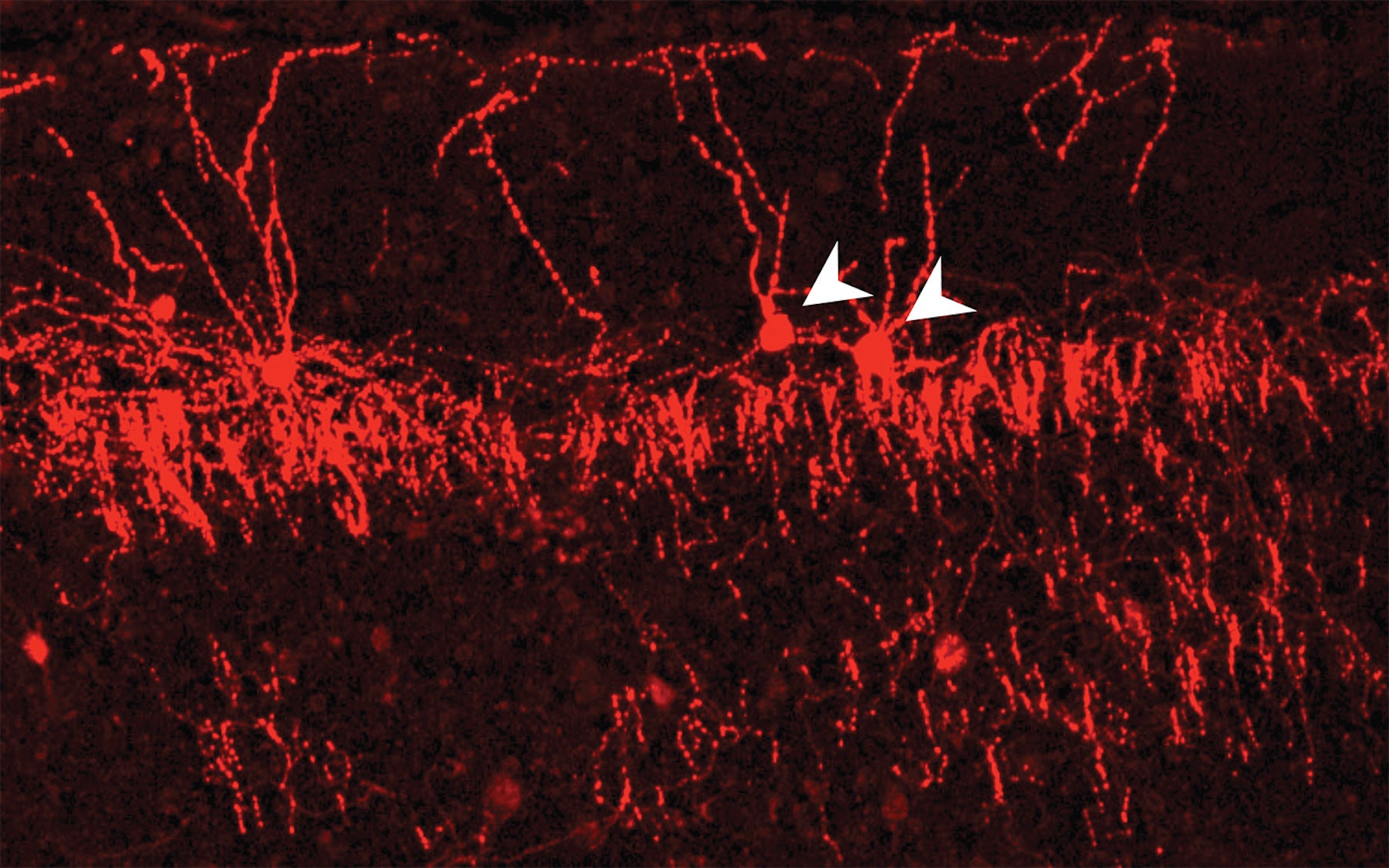 CSHL neuroscientists have revealed the connectivity pattern of chandelier cells, a distinctive kind of inhibitory cell in the mammalian brain. They show how the candelabra-shaped cell interacts with hundreds of excitatory cells in its neighborhood, receiving information from some, imparting information to others.

Cold Spring Harbor, NY — The brain’s astonishing anatomical complexity has been appreciated for over 100 years, when pioneers first trained microscopes on the profusion of branching structures that connect individual neurons. Even in the tiniest areas of brain tissue, the pathways are tangled, almost indescribably dense. Today, neuroscientists are trying to figure out the workings of all those cells and the networks they form, the ultimate grand-challenge problem.

In a study appearing today in Nature Neuroscience, a team from Cold Spring Harbor Laboratory (CSHL) uses advanced technologies to illuminate the connectivity pattern of chandelier cells, a distinctive kind of inhibitory cell type in the mammalian brain. They reveal for the first time how this candelabra-shaped cell interacts with hundreds of excitatory cells in its neighborhood, receiving information from some, imparting information to others.

In the experiments just reported, these highly specific interactions are situated in the context of a larger global network regulating the fear response in mice. Chandelier cells play analogous roles in other networks, capable of inhibiting excitatory neurons in a variety of contexts. The research therefore suggests more broadly how communication hierarchies may be shaped in the brain, as diverse and often intermingled sets of neurons in “local” areas both receive inputs from and send outputs to distinct brain areas, near and far.

The team, led by CSHL Professor Z. Josh Huang and including researcher Joshua Gordon, M.D., Ph.D., director of the National Institute of Mental Health, focused on dense crowds of excitatory cells called pyramidal neurons—several hundred of which can connect with a single chandelier cell. Because each chandelier cell may control the firing of hundreds of pyramidal neurons, it has been suggested that they exert a kind of “veto” power over local excitatory messages. But there is more to the story. As this research shows, each chandelier cell also can receive inputs from hundreds of excitatory cells, input that influences whether or not it inhibits a circuit in which it is involved.

The new research reveals how spatially intermixed pyramidal neurons that were associated with single chandelier cells in the mouse prelimbic cortex segregated into two groups. These were distinguished according to where in the brain they project to and their likely function.

One ensemble of these pyramidal cells was shown to transmit information to the amygdala, resulting in a fear response; this ensemble can be inhibited by the chandelier cell. A second ensemble projects to cortical areas conveying information from the thalamus, a relay station that Huang speculates is sending higher-order information to the chandelier cell. This information might reflect, for example, whether the individual (whether mouse, person, or other mammal) should be afraid of something that it has sensed in its environment, given past experience.

“This circuit highlights the exquisite selectivity of neuronal wiring with respect to inhibition in the most complex and heterogeneous part of the brain,” Huang says. “It also illustrates the directionality of information flow in local and global brain networks. The messages move in a specific direction&madashthe chandelier cell’s overall inhibitory and information-routing role being the result of signals to it and from it by specific sets of neurons to which it is connected.”

CSHL neuroscientists have revealed the connectivity pattern of chandelier cells, a distinctive kind of inhibitory cell in the mammalian brain. They show how the candelabra-shaped cell interacts with hundreds of excitatory cells in its neighborhood, receiving information from some, imparting information to others.