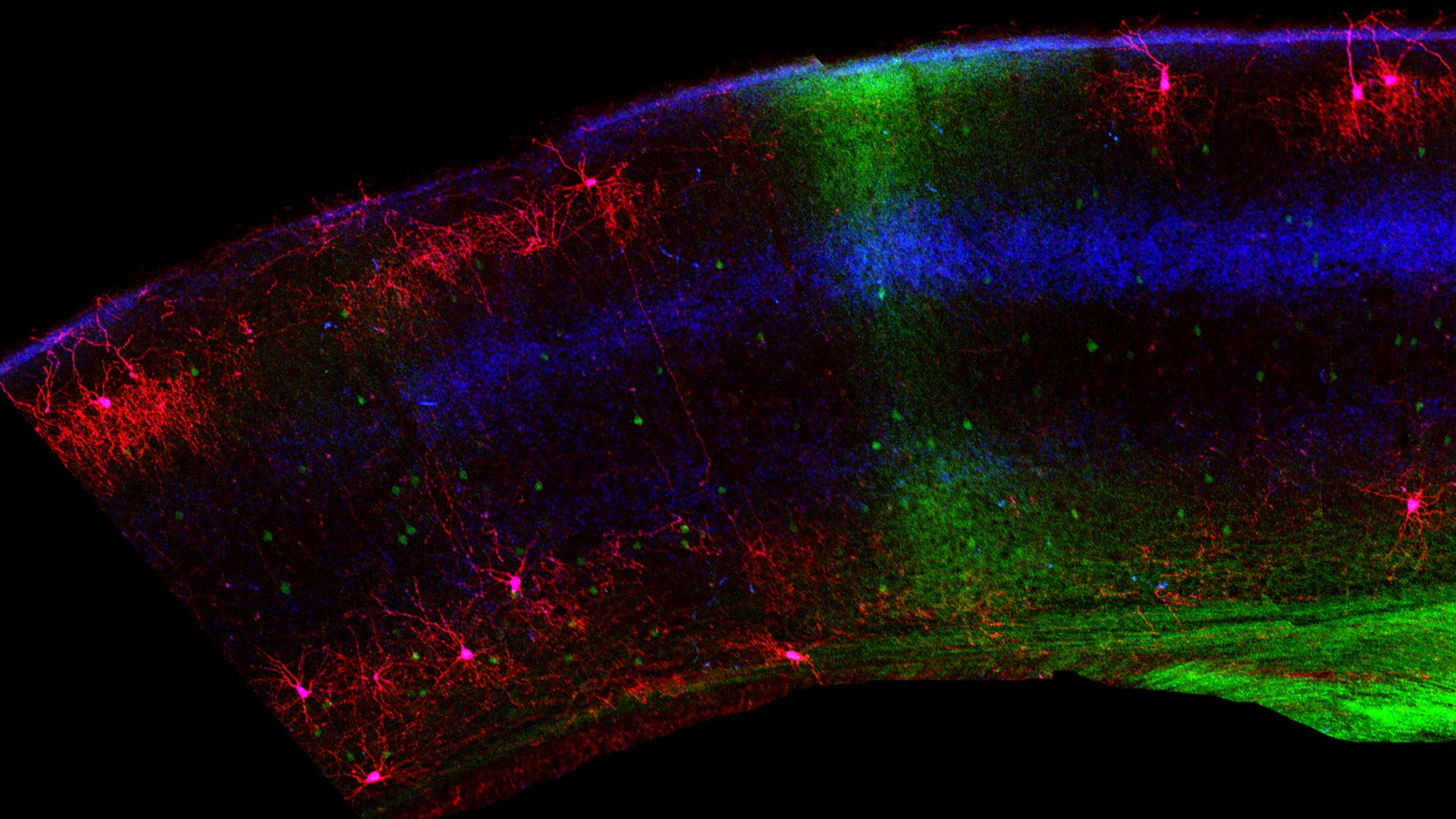 Having too many chandelier cells (red) in the binocular region of the brain can severely impair a mouse’s depth perception. Scientists found these branched neurons, which are potent inhibitors, are naturally reduced within the first couple of weeks of a mouse’s life, particularly in a subregion of the visual cortex that processes visual information from both eyes (green). The image shows a brain section of a two-week old mouse pup with normal levels of chandelier cells in their visual cortex. Image: Bor-Shuen Wang, Huang lab.
email envelop icontwitter icon share buttonfacebook icon share buttonlinkedin icon share button

The connections that integrate information from the left and right eyes are set up early in development, but visual experiences are important for fine-tuning the circuits. Without pruning the proper cells, an adult may lack full use of their visual system.

Our perceptions of the world are shaped both by our biology and our experiences. New work from Cold Spring Harbor Laboratory Adjunct Professor Z. Josh Huang provides a glimpse of how these factors intersect in a part of the brain that integrates visual information, establishing the neural circuitry that literally shapes how we see the world.

The study, published in the journal Neuron, concerns the connections that integrate information from the left and right eyes to generate a single, coherent image. The initial wiring of the brain sets the stage for this information processing early in development, but visual experiences are important for fine-tuning the circuits. “We know it’s not whether it’s nature or nurture, but it’s clearly both,” Huang says. “The question is really how does nature constrain nurture, or how does the nurture work with nature?”

In their study, Huang and colleagues focused on so-called chandelier cells, elaborately branched neurons that reach out to dampen the signaling of hundreds of neighboring cells. They resemble an old-fashioned chandelier with many branches. These cells, which are some of the most potent inhibitory cells in the nervous system, are distributed with some regularity throughout the brain. But in the part of the brain that generates binocular vision, their density thins.

Genetically engineered mice developed in the Huang lab allowed the team to visualize these cells in the brain. Strikingly, they found that the cells were much more abundant within the binocular region of the visual cortex immediately after birth than they were in the brains of older animals. The process of pruning chandelier cells starts in the retina at the back of the eye. The young retina sends signals to the visual cortex that kill off the inhibitory cells. Huang explains:

“In just a matter of a few days, before the mouse opens their eyes, so before their experience, there’s a very dramatic process that eliminates these cells. More than half of them are basically killed.”

Reducing chandelier cells’ numbers likely frees cells in the binocular region of the visual cortex to communicate more efficiently between the two visual hemispheres, which is essential for rapidly integrating signals relayed from both eyes, Huang says. In fact, when the team interfered with this process, generating mice where chandelier cells remained abundant in this part of the brain, the animals’ depth perception was severely impaired, suggesting an inability to integrate the information taken in by the two eyes.

The connections that integrate information from the left and right eyes are set up early in development, but visual experiences are important for fine-tuning the circuits. Without pruning the proper cells, an adult may lack full use of their visual system.