Author John Hawkins has written a well-researched biography about Termeer’s legacy—how he built a global biotech giant, Genzyme, and mentored a new generation of business leaders who continue to relentlessly challenge conventional innovation models and bring new novel treatments to patients around the world. 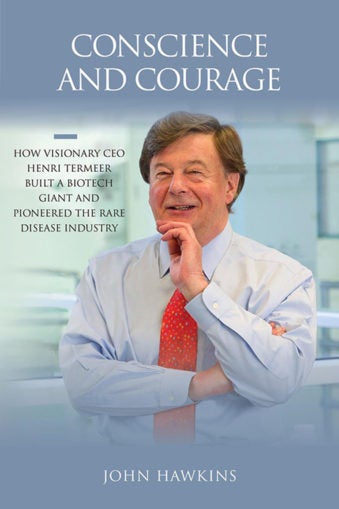 “Biotech’s scientific luminaries are widely known, its business pioneers less so,” said Dr. John Inglis, Publisher and Executive Director, CSHL Press. “We are delighted to help John Hawkins put an overdue spotlight on Henri Termeer, an innovative executive who always put patients and their need for hope at the center of his healthcare strategy. Under his leadership, the small start-up Genzyme took a novel approach to research, development, and commercialization of treatments for rare diseases and became a biotech giant. John’s book charts this transformation but also Termeer’s personal evolution as a source of wisdom, guidance, and mentoring that continues to have an impact on the management teams of major corporations today.”

Dutch-born, Termeer began his career in the healthcare industry and quickly rose to senior leadership positions. But in 1983, he changed course to join a two-year-old start-up, Genzyme, and over the next 28 years built a global Fortune 500 company with more than $4 billion in annual revenues and 14,400 employees. Under his mentorship, the Genzyme teams chose to forgo the traditional blockbuster approach to innovation and instead put patients at the center of their strategy. They focused on the development of breakthrough treatments for smaller groups of underserved patients suffering from rare diseases who had no other treatment options.

“Henri Termeer is among the founders of the biotechnology industry, and, without doubt, he was the father of the crusade to discover, develop, and deliver novel therapies to rare disease patients,” said author John Hawkins. “His vision, courage, and exemplary leadership serve as a model for today’s and tomorrow’s biotech leaders. He was a generous humanitarian of high character who possessed a passion for patients and an unyielding optimism in facing the challenges he met in improving their lives. I wrote the book to not only reveal the inspirational magic of Termeer’s life, leadership, and lessons, but to recognize a giant, largely unknown, who did so much for the millions of patients, patient families, and caregivers who benefit daily from his contributions.”

Thirty million people in the United States, 10% of the population, more than half of them children, have a “rare” disease—an enduring, often life-threatening condition typically affecting fewer than 200,000 people. In the 1980s, drug companies were averse to the risky development of therapies for such small groups of patients that might require tens or hundreds of millions of dollars of investment. Henri Termeer succeeded in guiding Genzyme to the creation of a wealth of treatments for such conditions with a transformative approach that harnessed innovative biotechnology to a business model capable of sustaining its costs. And he was instrumental in the founding of the Biotechnology Industry Organization (BIO), which successfully advocated for the first legislation to give patients access to breakthrough and experimental therapies.

“Our long-time colleague, John Hawkins, has written a thoughtful, comprehensive book about an extraordinary man. Henri Termeer had all the hallmarks of a great leader, mentoring scores of other leaders and being an innovative, iconoclastic thinker,” said Steve Potter, CEO of Odgers Berndtson US. “We were delighted to help support John’s work in writing about the life and legacy of Henri Termeer.”

In an accessible, engaging style, Conscience and Courage is a unique glimpse into the life and times of a business pioneer whose influence pervades today’s biotech and pharmaceutical sectors through his direct mentoring of more than 40 current and former CEOs. The book includes revealing, first-hand accounts from friends and colleagues based on more than 130 personal interviews with the author. Termeer’s story will intrigue general audiences, as well as readers interested in entrepreneurial leadership, the early development of biotechnology, medicine, business, and public policy.

Conscience and Courage is available in print and eBook formats online and at bookstores. Visit www.termeerbook.com for more information.

John Hawkins is a biotechnology and pharmaceutical industry veteran and an expert in assessing the industry’s top executive and boardroom talent. For nearly four decades, John has encountered and studied many of the world’s best and brightest leaders in the life sciences arena. John’s personal exposure to Henri Termeer began through his involvement as a healthcare investment banker in the IPO heydays of the mid-1980s. Later, while serving as the CFO of a publicly held, pioneering mammalian cell culture firm and as a senior partner assessing and appointing more than 200 pharma/biotech Board Directors and CEOs, John accrued a unique contextual perspective on Termeer’s life and legacy. Father of three grown children and a resident of Charlottesville, Virginia, Hawkins has climbed four of the world’s Seven Summits.

From its beginnings in 1933 as an initiative to publish an annual Symposium on Quantitative Biology, Cold Spring Harbor Laboratory Press is now the largest of the five educational divisions of the Laboratory, with more than 200 books in print, eight journals, and a variety of online initiatives. Its publications assist working scientists, graduate and undergraduate students, and the general public through the mission of the Press to foster and financially support the Laboratory’s commitment to the advance and spread of scientific knowledge.

The cofounders of bioRxiv and medRxiv explain preprint servers and how they are contributing to ending the pandemic.   Read more »