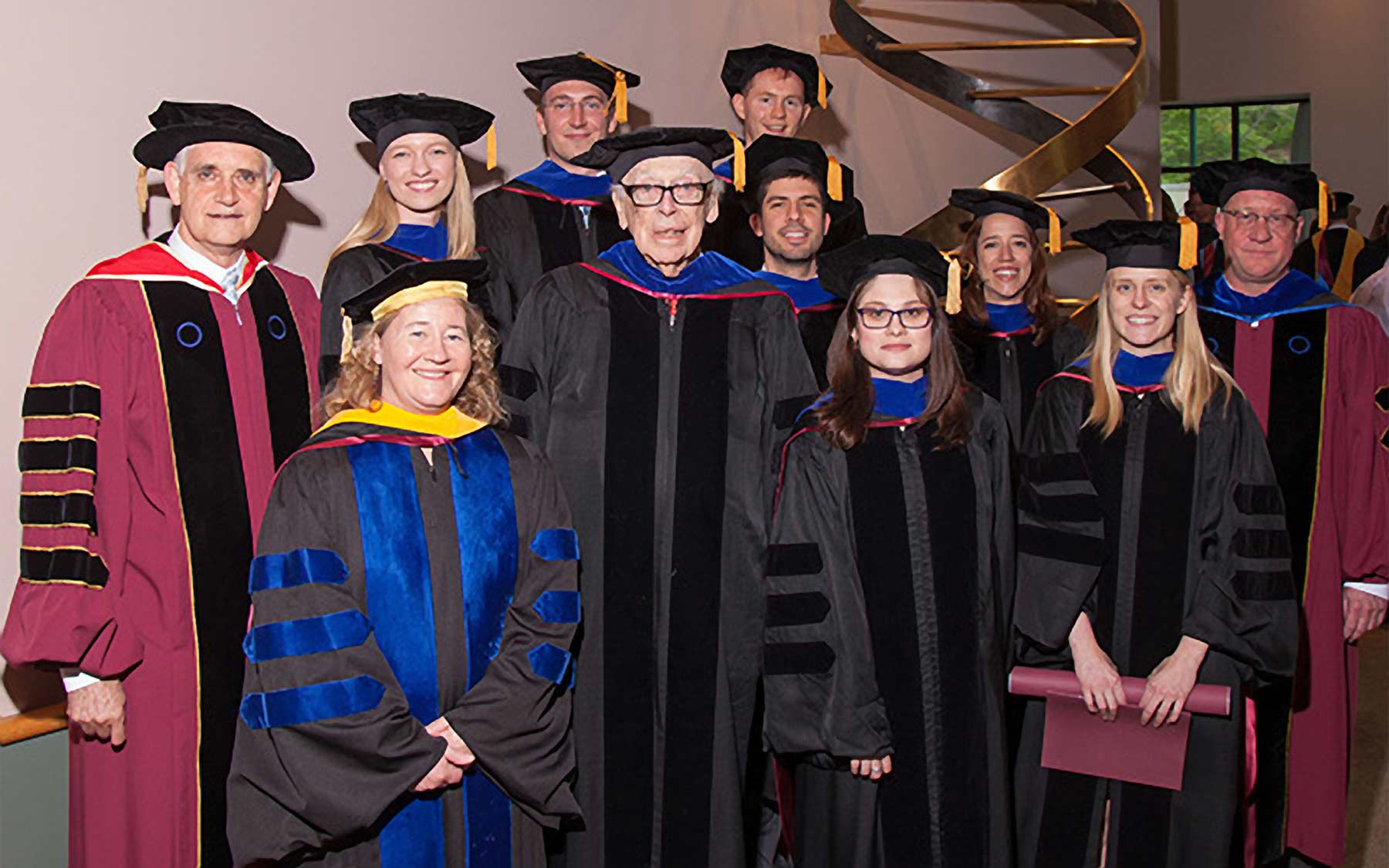 Eight new Ph.D.s join a group of 90 alumni who have earned the degree from the Watson School of Biological Sciences in the 18 years since its accreditation.

Cold Spring Harbor, NY — On Sunday, May 7, distinguished scientists joined proud friends and family at the 14th commencement ceremony of the Watson School of Biological Sciences (WSBS) at Cold Spring Harbor Laboratory (CSHL). Eight outstanding young scientists were awarded the degree of Doctor of Philosophy and an honorary degree was bestowed upon Nobel laureate Carol Greider, Ph.D., who spent nearly a decade at CSHL early in her career.

Jamie C. Nicholls, Chairman of the Laboratory’s Board of Trustees, addressed the graduating class, saying, “We are extremely proud of the Watson School’s many accomplishments, including its innovative curriculum, which is now emulated by many other institutions, and its impressive faculty of leading biomedical researchers.”

Attendees who gathered in CSHL’s Grace Auditorium were welcomed by Dr. Bruce Stillman, CSHL President and CEO, and by Dr. Alexander Gann, Dean of the Watson School. “These students are proud products of our unique program,” said Dr. Gann. “We enable students to complete their Ph.D. degrees two years quicker than the national average, and this is a result of dedicated faculty who ensure that these exceptional students pursue science in a highly focused way.”

Dr. Carol Greider, honored at today’s WSBS graduation, earned her Ph.D. at the University of California, Berkeley, where as a graduate student in 1984, working with Dr. Elizabeth Blackburn, she discovered telomerase, an enzyme that maintains telomeres, the “caps” at the end of chromosomes. In 1988 Dr. Greider went to Cold Spring Harbor Laboratory, where, as the Lab’s second CSHL Fellow she cloned and characterized the RNA component of telomerase. In 1990 she was appointed an Assistant Investigator and in 1994 an Investigator. In 1997 Dr. Greider moved her laboratory to the Johns Hopkins University School of Medicine. Today she is Daniel Nathans Professor and Director of Molecular Biology and Genetics at the university.

In her convocation address to the eight newly minted Watson School Ph.D.s, delivered after receiving an honorary Doctor of Science degree, Dr. Greider spoke of her career, including her award of the 2009 Nobel Prize for Physiology or Medicine (shared with Dr. Blackburn and Dr. Jack Szostak), in characteristically self-effacing terms. Her chief message to the graduates was that “whenever I get knocked down, I get back up again.” She advised the graduates to expect both ups and downs in the research careers that lay before them —but never to become discouraged. She expressed the hope that anecdotes from her own career “just maybe will reinforce your own desire to get back up quickly” whenever a setback occurs.

For a record third time, Associate Professor Gurinder “Mickey” Atwal, a quantitative biologist, was honored with the Winship Herr Award for Excellence in Teaching. Named for the founding dean of the Watson School, the award is annually given to a teacher singled out by the school’s first-year students.

This year, Dr. Herr, now a Professor at the Université de Lausanne in Switzerland, was present at the commencement convocation. He offered parting remarks to this year’s graduates, noting that when the school was founded nearly two decades ago, “we set high goals—we wanted to produce leaders.” Calling the day’s eight graduates “a remarkable group,” Dr. Herr said their talents and early successes, as well as that of the school’s prior graduates, was a mark of the school’s success in attaining its lofty founding objectives.