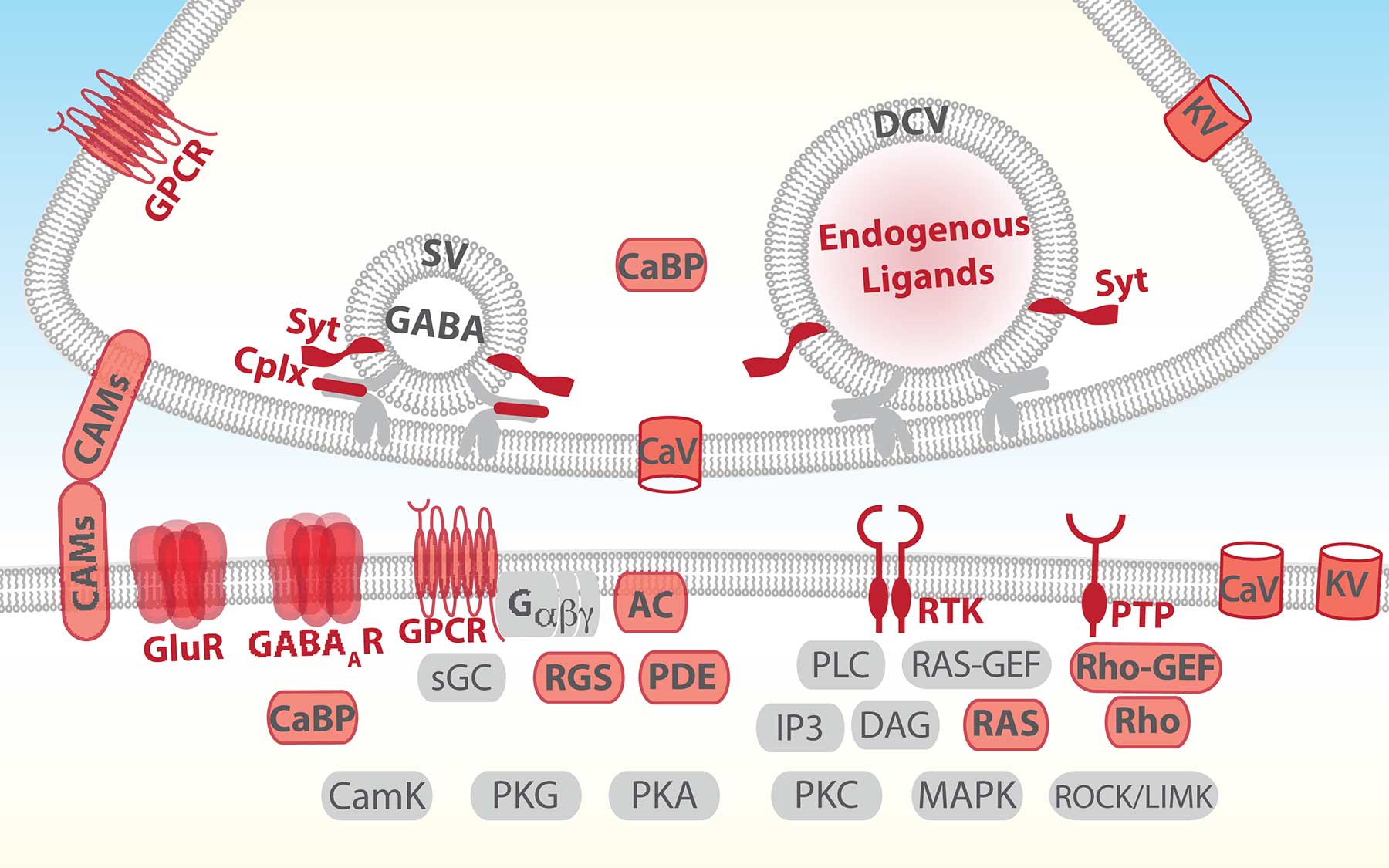 Patterns of cell-to-cell communication are the core feature making possible rigorous distinctions among neuron types across the mouse brain. The Huang lab discovered cell-defining features fell into just six functional categories of gene families, all vital for cell-to-cell communications. They encode proteins that are expressed on either side of the communications interface in neurons (all the elements tinted red): along or near membranes that face one another across the synaptic gap–the narrow space separating a (pre-synaptic) neuron sending a signal and a (post-synaptic) neuron facing it which receives the signal.
email envelop icontwitter icon share buttonfacebook icon share buttonlinkedin icon share button

Cold Spring Harbor, NY — In a major step forward in research, scientists at Cold Spring Harbor Laboratory (CSHL) today publish in Cell a discovery about the molecular-genetic basis of neuronal cell types. Neurons are the basic building blocks that wire up brain circuits supporting mental activities and behavior. The study, which involves sophisticated computational analysis of the messages transcribed from genes that are active in a neuron, points to patterns of cell-to-cell communication as the core feature that makes possible rigorous distinctions among neuron types across the mouse brain.

The team, led by CSHL Professor Z. Josh Huang, likens their discovery to the way communication styles and patterns enable us to learn important—definitive—things about people. “To figure out who I am,” says Anirban Paul, Ph.D., the paper’s first author, “you can learn a great deal by studying with whom and how I communicate. When I call my grandma, do I use an app or a phone? How do I speak to her, in terms of tone? How does that compare with when I communicate with my son, or my colleague?”

Out of more than 600 gene families, the team found about 40 families whose activity patterns could be used to distinguish the six groups of cells. Surprisingly, Huang says, these cell-defining features fell into just six functional categories of gene families, all of which are vital for cell-to-cell communications. They include proteins that are expressed on either side of the communications interface in neurons: along or near membranes that face one another across the synaptic gap—the narrow space separating a (pre-synaptic) neuron sending a signal and a (post-synaptic) neuron facing it which receives the signal.

The key genes dictate which other cells a neuron connects to and how it communicates with those partners, Huang explains. “Ultimately, the genes code for one striking feature, which is with whom and how these neurons talk to each other.”

The communications architecture is effectively hardwired into the molecular makeup of neurons, very likely across the brain, the team says. The ability to generalize the GABA results is based on re-analysis performed by the team of published data from the Allen Brain Atlas. It shows that the six “defining” gene/protein families they identified are also statistically distinguishing in random sets of neurons, including excitatory neurons, throughout the brain.

The findings should help scientists sort out the bewildering array of neurons that are intertwined in the brain. Over the years, as neuroscientists have proposed various approaches for classifying neurons, one question has been whether these classifications reflect cells’ biological properties, or are merely useful but arbitrary designations. Hundreds or thousands of types of neurons probably exist in the brain but there has been no agreement among neuroscientists about how to define different types and on what biological basis. In a real sense, says Huang, the CSHL team has discovered the rules of a “core genetic recipe” for constructing diverse types of nerve cells.

This research was supported by the National Institutes of Health, the CSHL Robertson Neuroscience Fund and the Brain & Behavior Research Foundation/NARSAD. 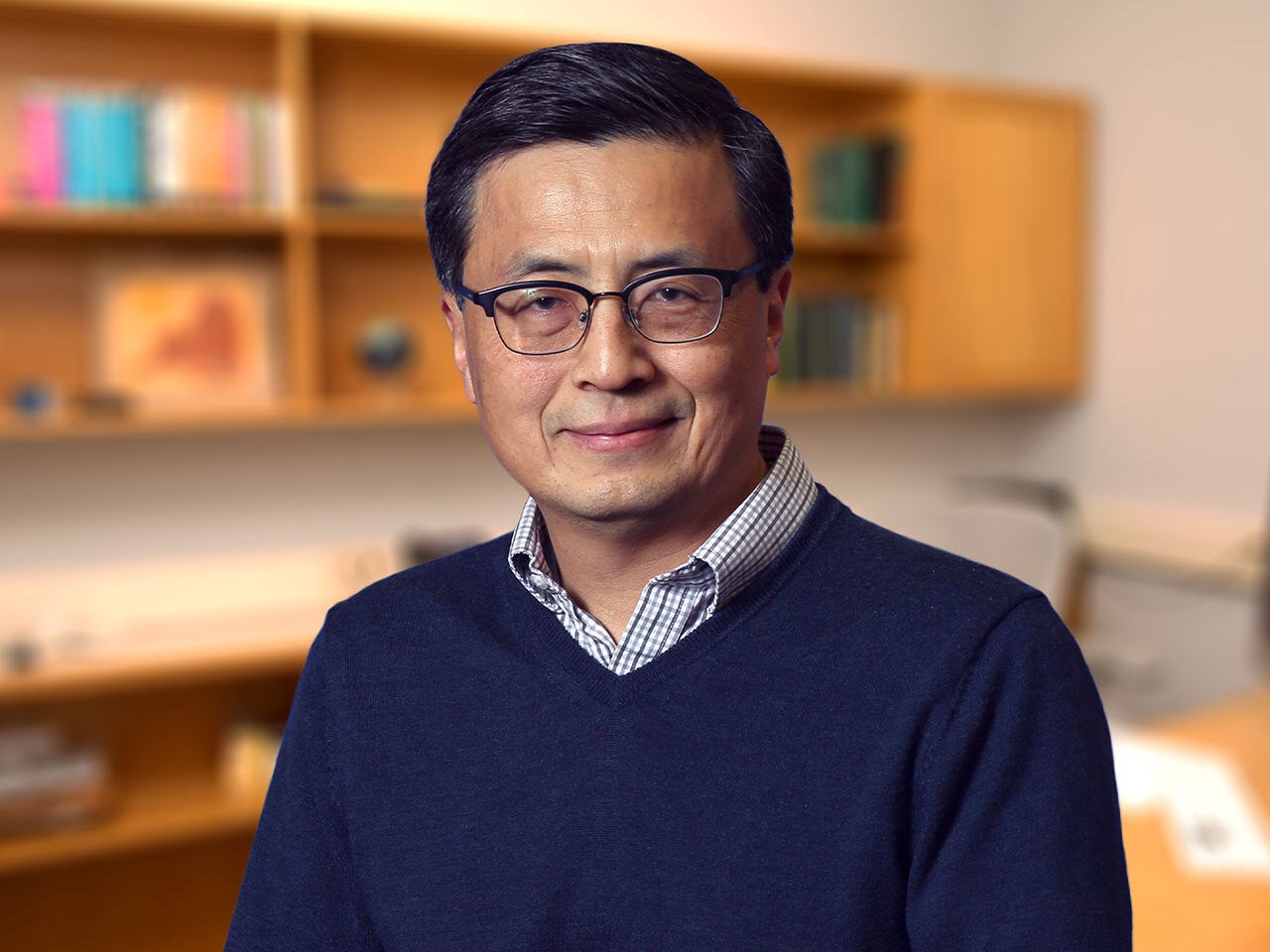 For brain cells, you are who you speak to

Tracking a person entails searching through their email, phone, and other means of communication to map out their network. To do this for a brain cell   Read more »

MAPseq can trace the long-range projections of large numbers of individual neurons from a specific region to wherever they lead in the brain.   Read more »