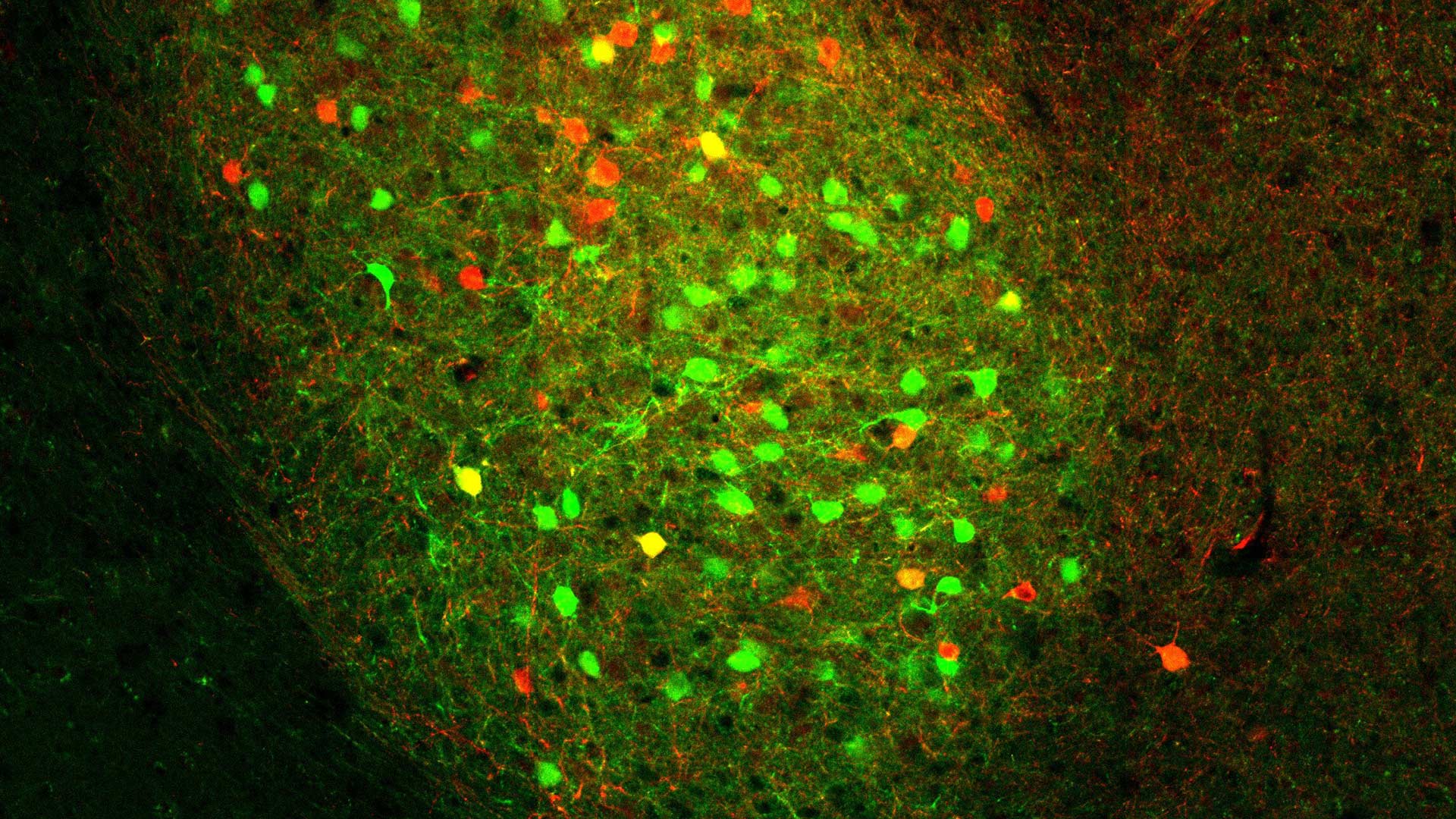 The basolateral amygdala, an almond-shaped structure inside the brain, is responsible for fear- and reward-based learning. Cold Spring Harbor Laboratory Professor Bo Li and his postdoc Xian Zhang uncovered distinct hardwired circuits in this structure responsible for processing “positive” and “negative” stimuli that lead to reward or punishment for a mouse. In this image of a mouse amygdala, the green neurons and their connections process positive stimuli that lead the animal to seek rewards, while the red neurons and their connections process negative stimuli that lead the animal to avoid punishment. Image: Xian Zhang/Li lab
email envelop icontwitter icon share buttonfacebook icon share buttonlinkedin icon share button

Are animals born to seek rewards or avoid punishment? Cold Spring Harbor Laboratory Professor Bo Li and his lab found that mice have pre-programmed neurons and circuits that process “positive” and “negative” stimuli. Their findings may be useful for studying neurological and psychiatric disorders in humans.

Are we born to fear punishment or crave rewards? Or do those capacities evolve with experience? Cold Spring Harbor Laboratory (CSHL) Professor Bo Li and his lab found that mice have pre-programmed circuits that process “positive” and “negative” stimuli. These neurons are found in the mouse’s amygdala, a section of the brain that deals with learning rewards and punishments. The researchers’ findings may be useful for studying neurological and psychiatric disorders in humans.

Previously, Li and his colleagues discovered that the amygdala is the hub for both fear- and reward-based learning. Xian Zhang, a postdoc in Li’s lab, wanted to find out the exact circuitry that takes in positive or negative stimuli that trigger either pleasure or fear.

In an experiment similar to how Pavlov’s dog was taught to associate a bell sound with food, Li and Zhang trained mice to connect certain sounds with either a reward (a refreshing drink of water) or a punishment (an annoying puff of air to the whiskers). Then, in collaboration with CSHL Adjunct Professor Z. Josh Huang, they developed a method to mark and observe different neurons in the mouse amygdala. They discovered two distinct types of neurons: one that was activated when the mouse heard the reward sound, and one that was activated when it heard the punishment sound. Both neuron populations exist throughout the entire amygdala. Li explains:

The researchers were surprised to discover that some amygdala cells are hardwired to process motivation stimuli, even without training. A puff of air or sip of water triggered the same neurons in both untrained and trained mice.

Zhang thinks their findings may be relevant to human psychiatric disorders like depression. He says:

In mouse models of depression, animals lack the motivation to seek rewards or avoid punishments. Li and Zhang hope that this study, published in Nature Neuroscience, will help researchers understand how motivation works or goes wrong in mammalian brains.

Are animals born to seek rewards or avoid punishment? Cold Spring Harbor Laboratory Professor Bo Li and his lab found that mice have pre-programmed neurons and circuits that process “positive” and “negative” stimuli. Their findings may be useful for studying neurological and psychiatric disorders in humans.