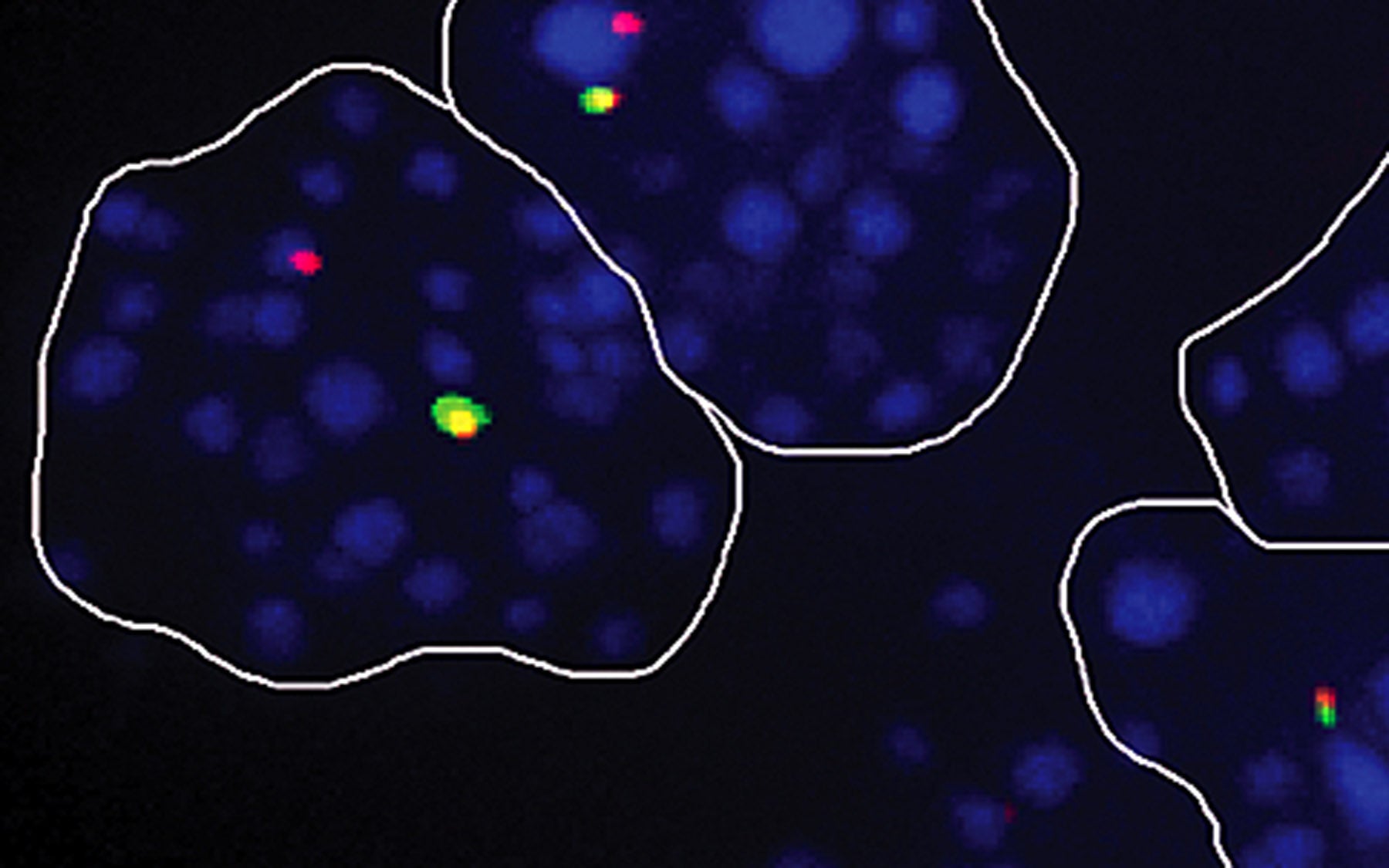 The nucleus of every cell in our body contains two copies of each gene, encoded in our DNA (nuclei outlined in purple, DNA for individual genes labeled in red). In general, these copies are used equally, but on occasion, the cell chooses to use just one (seen here in yellow/green). Today, researchers from CSHL have discovered that this truly random process, known as monoallelic gene expression, occurs during development, offering an unexpected glimpse of the significant variability in gene expression.
email envelop icontwitter icon share buttonfacebook icon share buttonlinkedin icon share button

Team finds that some cells activate only one of their two gene copies during development, altering protein yields and raising new questions

Cold Spring Harbor, NY — We are a product of our parents. Maybe you have your mother’s large, dark eyes, and you inherited your father’s infectious smile. Both parents contribute one copy, or allele, of each gene to their offspring, so that we have two copies of every gene for a given trait—one from mom, the other from dad. In general, both copies of a gene are switched on or off as an embryo develops into an adult. The “switching on” of a gene begins the process of gene expression that ultimately results in the production of a protein.

Occasionally, a cell will arbitrarily begin to use one copy of a gene over the other. The activation of only one member of a gene pair is called ”monoallelic gene expression.”  In work published today in Developmental Cell, a team of researchers led by Professor David Spector at Cold Spring Harbor Laboratory (CSHL) shows that this random phenomenon is far more likely to be found in mature, developed cell types than in their stem cell precursors. This, in turn, offers an unexpected glimpse of randomness and variability in gene expression.

Cells are exquisitely sensitive to protein amounts: too much or too little can give rise to diseases, including cancer. For example, certain proteins, called tumor suppressors, act as  “stop” signals to restrain cell growth. A cell with only half the dosage of such a protein may become the seed of a tumor. Random monoallelic gene expression cuts the amount of a protein by half, suggesting that this type of variability may have significant implications for disease.

Spector and Mélanie Eckersley-Maslin, Ph.D., lead author on the new paper, found that monoallelic gene expression is truly a random process. “It is not deterministic in any way,” says Spector. “This significant amount of flexibility and randomness in gene expression is important for adaptation as a species evolves, but it is unclear how it functions in organisms today.”

To better understand when monoallelic gene expression is established, Spector and his team collaborated with researchers from the European Molecular Biology Laboratory. The team used advanced sequencing technology and analysis tools to globally assess allele usage in two different cell types. They compared embryonic stem cells, which can change, or “differentiate,” into nearly any type of tissue, with cells that had already differentiated into the precursors of neurons. They found a 5.6-fold increase in the number of monoallelically expressed genes in the differentiated cells. “As differentiation occurs, there is a dramatic change in gene expression as a specific program or set of genes is selected to be expressed and a massive reorganization occurs in the nucleus,” says Spector. “It is these enormous changes that lead to stochastic (i.e., variable) monoallelic expression.”

The team was surprised to find that 8% of the monoallelically expressed genes were able to boost their level of expression to compensate for what would otherwise be a shortfall. The researchers speculate that the cell may require higher amounts of protein from those genes. “This work raises many important questions,” says Spector, “such as: how does the cell know how much of each protein to produce? How much flexibility is there? What is the tipping point toward disease?” The team continues to explore these fascinating questions.

This work was supported by the National Institute of General Medical Sciences and the National Cancer Institute, a Genentech Foundation Fellowship, George A. and Marjorie H. Anderson Fellowship, Deutscher Akademischer Austauschdienst Postdoctoral Fellowship, the European Molecular Biology Laboratory, and the Wellcome Trust.