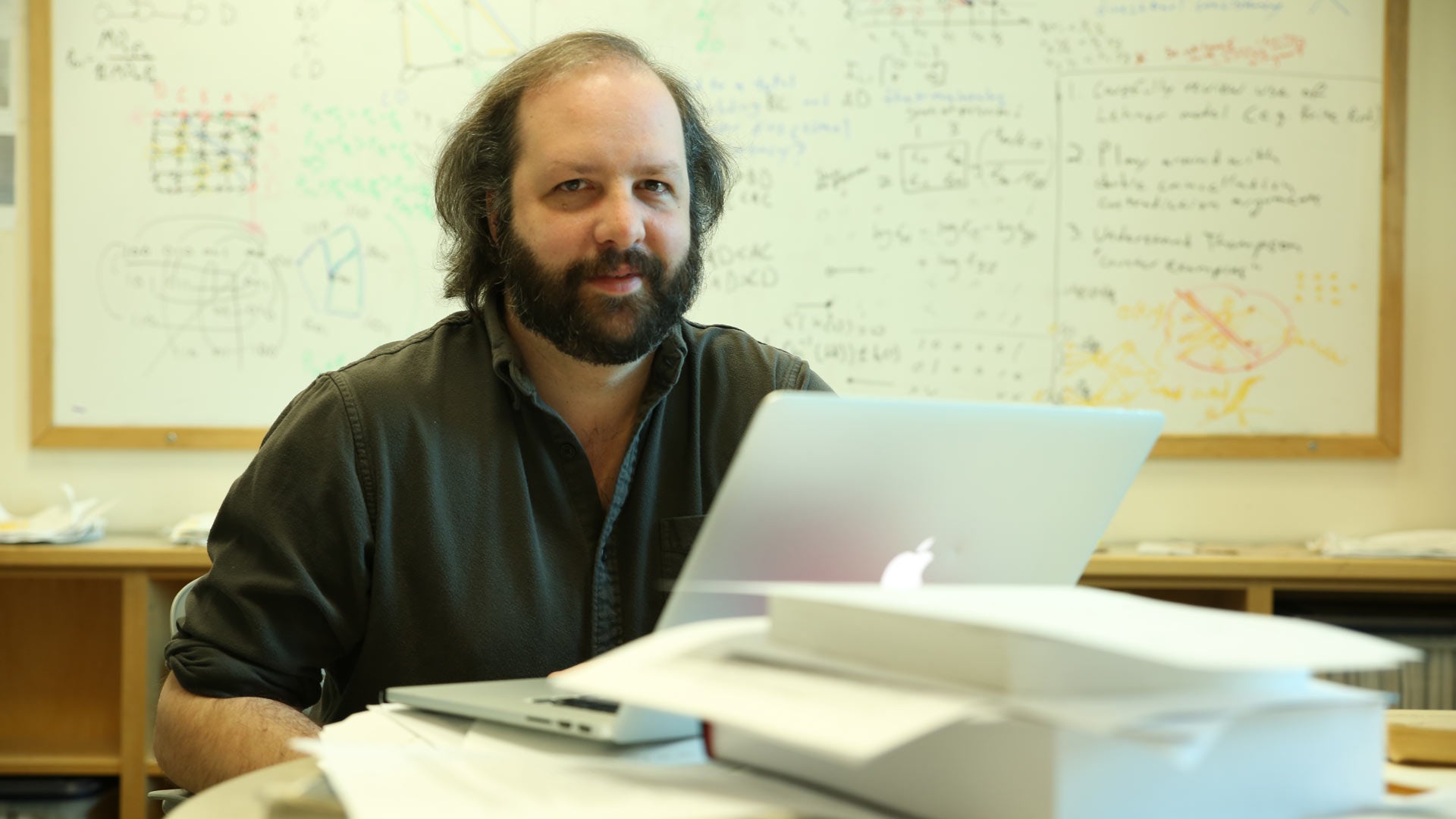 His interdisciplinary research began by reading a book.

When you see his office, with books stacked from floor to ceiling and papers strewn across desks, it’s clear that David McCandlish is an avid reader. As an assistant professor and quantitative biologist at CSHL, McCandlish endeavors to stay up to date on the newest and greatest ideas not only from his own field, but all parts of the life sciences.

“And when I was a grad student I was no different,” he said chuckling. “My advisor had this couch in his lab, and I would lie there with this stack of books.”

Oftentimes, McCandlish wouldn’t get up until he read his way through the whole stack. “A whole day could go by!”

But McCandlish has a favorite—a book he read after his freshman year in college that remains the inspiration for his scientific journey.

“It was really the most interesting science that I ever read,” he said, pulling the book from a nearby stack. “It has kind of a discrete math flavor, but it was addressing fundamental issues in biology about how evolution happens and why organisms have the forms that they do.”

His copy of the book The Origins of Order by Stuart A. Kauffman is a beat-up paper-back, coated in a protective film so shriveled that you can barely make out its cover. Clearly, McCandlish has opened it countless times.

Kauffman argues that the organizational principles behind life place predictable constraints on how species evolve. This means that, at times, the features a species takes on may develop because of these principles and despite what’s best for natural selection. This theory inspired a question that has driven McCandlish’s life work: “what is the menu that natural selection has to choose from?”

“I read that book right after my freshman year in college,” he said, “so it really was reading a book that put me on the path of working at the intersection of mathematics and biology.”

McCandlish finished his undergraduate years with a degree in both subjects. He then spent a summer in Bangalore India at the National Institute of Advanced Studies, learning from mathematician Prabhakar Vaidya, before returning to the States to apply his newfound mathematical knowledge to interesting biological questions.

“That was an influential time for me,” McCandlish said. “When I started grad school, that’s when I started taking these ideas from the more technical literature and saying, ‘if we reinterpret these ideas in terms of biological concepts, they tell us something interesting.’”

His work paid off in 2012. Just as he was finishing a research doctorate in evolutionary biology at Duke University, McCandlish’s Ph.D. dissertation was awarded the R.A. Fisher Prize from the Society for the Study of Evolution. In it, he describes a novel way to visualize the relationship between specific genes and the fitness of a species in something called a “fitness landscape.”

The researcher continued to perfect these methods during his postdoctoral years at the University of Pennsylvania, becoming even more interested in how the way genes work deeply influences how a species may adapt or evolve.

McCandlish is a member of CSHL’s Simons Center for Quantitative Biology.

“Intellectually this was just a great match for me,” he said, gesturing in the direction of his colleagues’ offices. “Justin Kinney has been working on very similar problems of mapping, but coming from a very physical rather than an evolutionary perspective. And Adam Siepel is also very interested in the questions I’ve been asking with my work.” For a researcher blurring the line between mathematics and biology, “the ability to have close colleagues with similar interests [from biology and math alike] is just a perfect fit.”

Predicting the evolution of genetic mutations

CSHL quantitative biologists have designed a computational approach for predicting the evolution of a rapidly mutating virus or cancer.   Read more »

Calculating the path of cancer