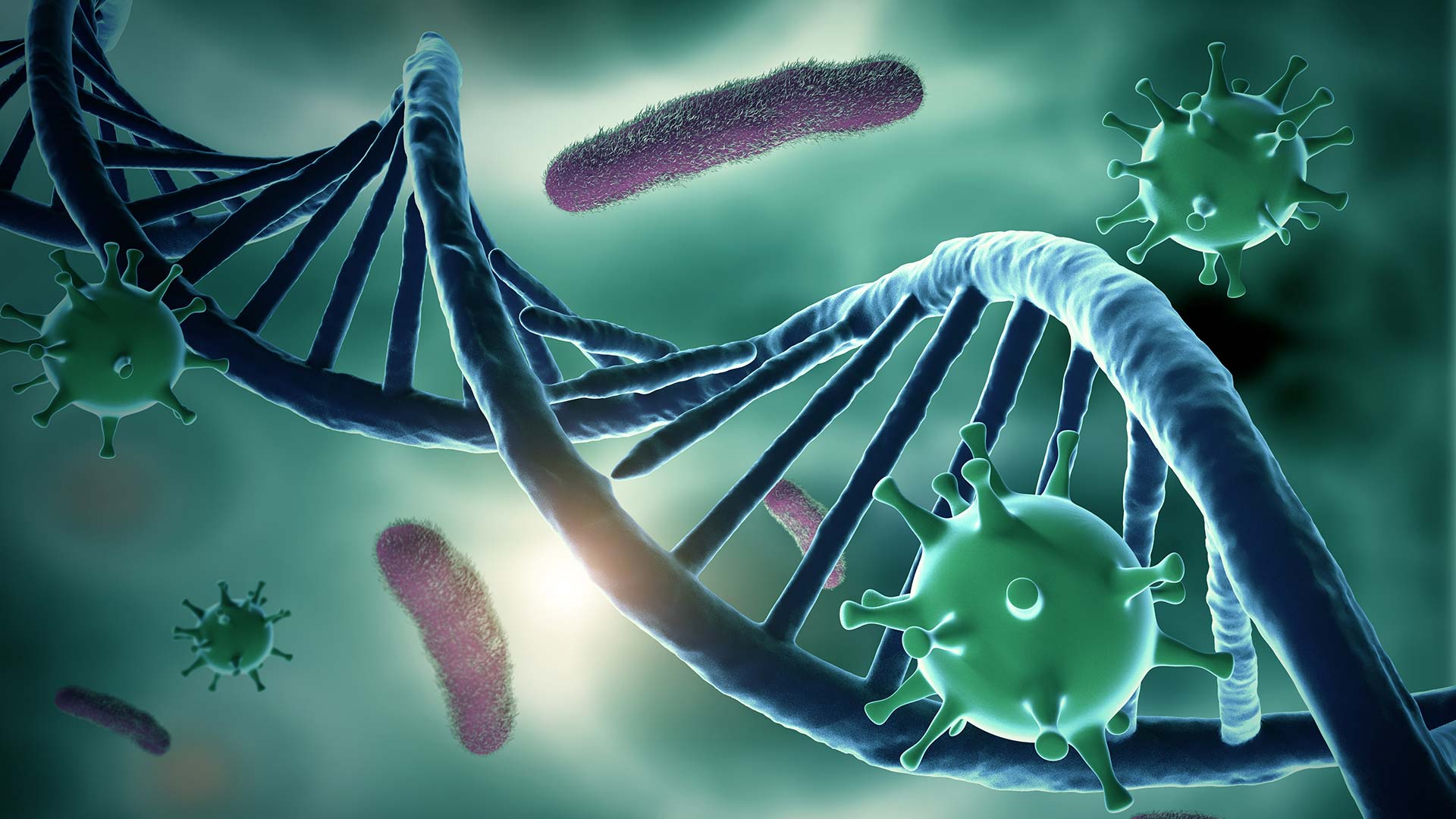 Although scientists have figured out how to develop powerful antibiotics to combat harmful bacteria, the cells develop resistance over time. Cold Spring Harbor Laboratory Assistant Professor David McCandlish is developing algorithms to predict antibiotic resistance in bacteria and hopefully put science one step ahead of disease evolution. Image: Giovanni Cancemi

Every 15 minutes, someone in America dies from antibiotic-resistant bacteria or fungi, adding up to 35,000 annual deaths. Globally, the United Nations reports that a mind-boggling 700,000 people a year die from infections that antibiotics can no longer fight. The report warns that this number could reach 10 million by 2050 if scientists don’t find alternative therapies against these bacterial enemies.

This phenomenon is evolution in progress. In the 20th century, researchers developed powerful antibiotics that destroyed bacterial cells before they could cause damage to the human body. In response, the diseases evolved: they learned to produce chemicals that deflect antibiotics so they can continue multiplying. These “superbugs” continuously bolster their defenses, outpacing pharmaceutical progress each time. How can science fight evolution?

Computational biology to the rescue

Cold Spring Harbor Laboratory (CSHL) Assistant Professor and Cancer Center member David McCandlish thinks we can predict it. A computational biologist who studies evolution and population genetics, McCandlish uses mathematical and statistical techniques to study living organisms, with the goal of building predictive models of how they may evolve. He believes that using the knowledge of genetic and biological mechanisms of how bacteria develop resistance can help foretell what they might do in the future in response to new medications. “If there’s a microorganism that we have a drug against, an antibiotic, or anti-microbial, we want to predict the specific sequence of mutations by which it will evolve antibiotic resistance,” McCandlish says. “So yes, we want to be able to predict evolution.”

McCandlish’s approach draws on the concept of adaptive landscapes, an idea that looks at organisms’ evolution as peaks and valleys. The adaptive landscapes model views evolution as a hill-climbing process. The populations with winning genetic traits—or highest genetic fitness—would rise up to the peaks, while those with inferior genetics would remain in the valleys between the peaks. Pictorially, these adaptive landscapes, sometimes called fitness landscapes, look like mountain ranges. In these charts, the horizontal axis depicts the organism’s one or several genes, and the vertical axis depicts the organism’s genetic fitness. The populations that were lucky enough to get “good” mutations climb to peaks. Those that get “bad” mutations that weigh them down end up in the valleys.

David McCandlish develops algorithms like this one with predictive power to give scientists the ability to see how specific genetic mutations can combine to make critical proteins change over the course of a species’s evolution. The results are visualized much like a topographical map. Height and color correlate with the level of protein activity (red = more protein activity, blue = less), while distance between points on the map represents how long it takes for the mutations to evolve to that level of activity. Video courtesy of Juannan Zhou/McCandlish lab

When it comes to bacterial species that are pathogenic to humans, those that climb to the peaks are bad news, particularly if that ascent is due to their drug-resistance abilities. If one were to depict some of the deadliest superbugs by using adaptive landscapes, methicillin-resistant Staphylococcus aureus (MRSA), which claims close to 20,000 lives a year in the United States, would likely be on one of the peaks. So would tuberculosis, which kills 230,000 worldwide.

How can adaptive landscapes help predict how the next potential superbug may evolve? To answer that question, scientists first need to understand the cellular, molecular, and genetic forces that drive antibiotic resistance in bacteria. They must also understand how the world so quickly arrived at this post-antibiotic era.

When Alexander Fleming first discovered penicillin in 1928, it led to the creation of the first antibiotic that became widely used in the 1940s and after. Humans got an evolutionary advantage over bacteria and could easily and efficiently kill many bacterial species before they caused any damage. But in the years that followed, society may have become a little overzealous with antibacterial armor. Doctors prescribed antibiotics to patients when they weren’t necessary. Cleaning product manufacturers put antimicrobial compounds into soaps and dishwashing liquid. Industrial farmers mixed antibiotics into the animals’ fodder, not only because it helped fight infections but also because it made them fatter, which was viewed as a positive side effect.

Consequently, a certain amount of antibiotics washed out or escaped into sewage, trickling into water and soil, where vast populations of bacteria lived. Millions of them died, except for some mutants who survived because they were lucky to have a slightly different assortment of genes that enabled them to develop cellular defenses. These lucky mutants went on growing, replicating and passing on their antibiotic-resistant genes.

The more information these algorithms can learn—particularly about pathogenic organisms like bacteria or fungi—the more precise and meaningful their forecasting would be.”

“That’s what happens when you put a stressor on a bacterial population, such as an antibiotic,” says Parjit Kaur, a professor of molecular genetics and biochemistry at Georgia State University, whose recent paper examines microbial drug resistance mechanisms. “There may be a random mutant that can now withstand that antibiotic, or there can be a spontaneous mutation. And then the resistant bacteria became the dominant population.”

Antibiotics are essentially poisons for bacteria. Once antibiotic molecules enter bacterial cells, they either damage or break the cell, or interfere with the cell’s replication. In either case, the bacterial population eventually dies out. To survive, the bugs must either eject the antibiotic molecules or demolish them before they destroy the cell.

Different bacteria species fight antibiotics differently, explains Kaur. Some mutate their genes to produce specific proteins that “escort” the trespassing antibiotic molecules out as soon as they enter the cell. That may sound like a sophisticated defense, but it’s not a novel concept. Organisms rely on the so-called transport proteins to bring substances in and out of cells. Typically, these transfer proteins usher in nutrients and spew out waste substances. Some germs simply evolved their genes to generate new transport proteins that ferret out the poisonous antibiotic molecules. “Antibiotics are toxic substances and these specialized proteins pump them right out,” Kaur says. And they go on living and replicating.

Other types of bacteria have double cell membranes—an inner and an outer layer. The space in between the two is called the periplasm, and that’s where these germs stage their antibiotic defense. These bacteria produce antibiotic-cleaving enzymes that work as molecular scissors, which are released into and kept inside the periplasmic space. Once antibiotics enter, these enzymes shred them into a heap of molecular debris. This enzyme mechanism isn’t superbly novel either. Bacteria use enzymes as part of their cellular “housekeeping” to cut other substances, Kaur explains, so it’s possible that some housekeeping enzymes were recruited and developed into “antibiotic warriors.”

Bacteria can also acquire antibiotic resistance genes from each other, and they have multiple ways of doing it. Under certain conditions, some can pick up these genes from the dead bacteria whose DNA had been dumped in the environment. Others can acquire such genes from a virus that penetrates microbial cells but doesn’t kill them—instead it might bring along some genetic material beneficial for bacteria. Lastly, the bugs can exchange genetic material. Think of it as MRSA snuggling next to an ordinary Staph, whispering. “Psst! I finally figured out how to kick this annoying methicillin bomb. Come close and I’ll share my secret.” And then they both can climb to the peaks.

Investigating what makes the bugs tick

Modern genetic tools offer scientists the ability to experiment with cells’ genetic mutations and see what evolutionary advantages or drawbacks they may produce.

“You take a bug and put in a bunch of genetic variants and see how fast they will grow,” explains McCandlish. “You take a protein of interest, make lots of different mutations in it, then stick these mutated sequences into cells and try to grow these cells. If that sequence works well, the cells will grow and increase in numbers. And if the sequence doesn’t work, the cells limp along and maybe divide once and then die.”

Scientists can identify the growth rates of each of these variants and what effects the mutations had on cells’ growth. They can then determine whether any of these mutations conferred evolutionary advantages. Some mutations may completely wipe out the population while others may imbue it with superpowers. A great advantage of this approach is that it is versatile—the same concept can be used to predict the evolution of any cells—not only microbial, but also tumors.
Scientists are already experimenting with such combos or mutational sequences, as they call them. McCandlish cites one recent study in which researchers inserted a variety of mutational sequences into yeast cells and measured their growth rates. The yeast cells with the most mutations proved to be the sickest, he notes, but it doesn’t have to be so—an occasional combo may prove just as deadly. By noting which mutational sequences give an organism a superb advantage, scientists can predict which ones will grow and take hold.

If there’s a microorganism that we have a drug against, an antibiotic, or anti-microbial, we want to predict the specific sequence of mutations by which it will evolve antibiotic resistance. We want to be able to predict evolution.”

McCandlish’s predictive algorithms rely on such studies for data and learning. The more information these algorithms can learn—particularly about pathogenic organisms like bacteria or fungi—the more precise and meaningful their forecasting would be. The yeast was a good playground, but one can do similar experiments for how drug resistance will evolve in bacteria, and see which mutational sequences would enable the bugs to fight antibiotics better.

“Let’s say we have developed a new antibiotic,” McCandlish says. “Now we want to be able to predict how would that enzyme that previously evolved to degrade the last generation of antibiotics, change to degrade new ones? Or maybe it won’t.” Knowing which genes might produce the resistance enzymes or proteins can let pharmaceutical companies stay one step ahead of the bugs.

Accurate forecasts could allow scientists to control or foster the evolution of cells—those of pathogenic microbes or cancer. If they understand how a particular cell evolves on its fitness landscape, they can design drug treatment strategies. “If we know that one specific drug will push a bacterial population to evolve resistance by one or the other of these peaks, then maybe by applying the second drug we can choose which way it evolves,” McCandlish says. “Or we can try to push the bugs to evolve to a peak where we know we have a second drug that crushes that peak. It would be like setting a trap.”

While those drug traps may not be available at your neighborhood pharmacist tomorrow, overall prediction models might help modern medicine get a leg up in the evolutionary race against microbes to avoid the dreadful forecast of 10 million deaths by 2050. Once the models are working, they would restore our evolutionary advantage over pathogens. Superbugs will keep climbing the evolutionary peaks. But we will be there waiting for them—with our antibiotic armor at the ready.