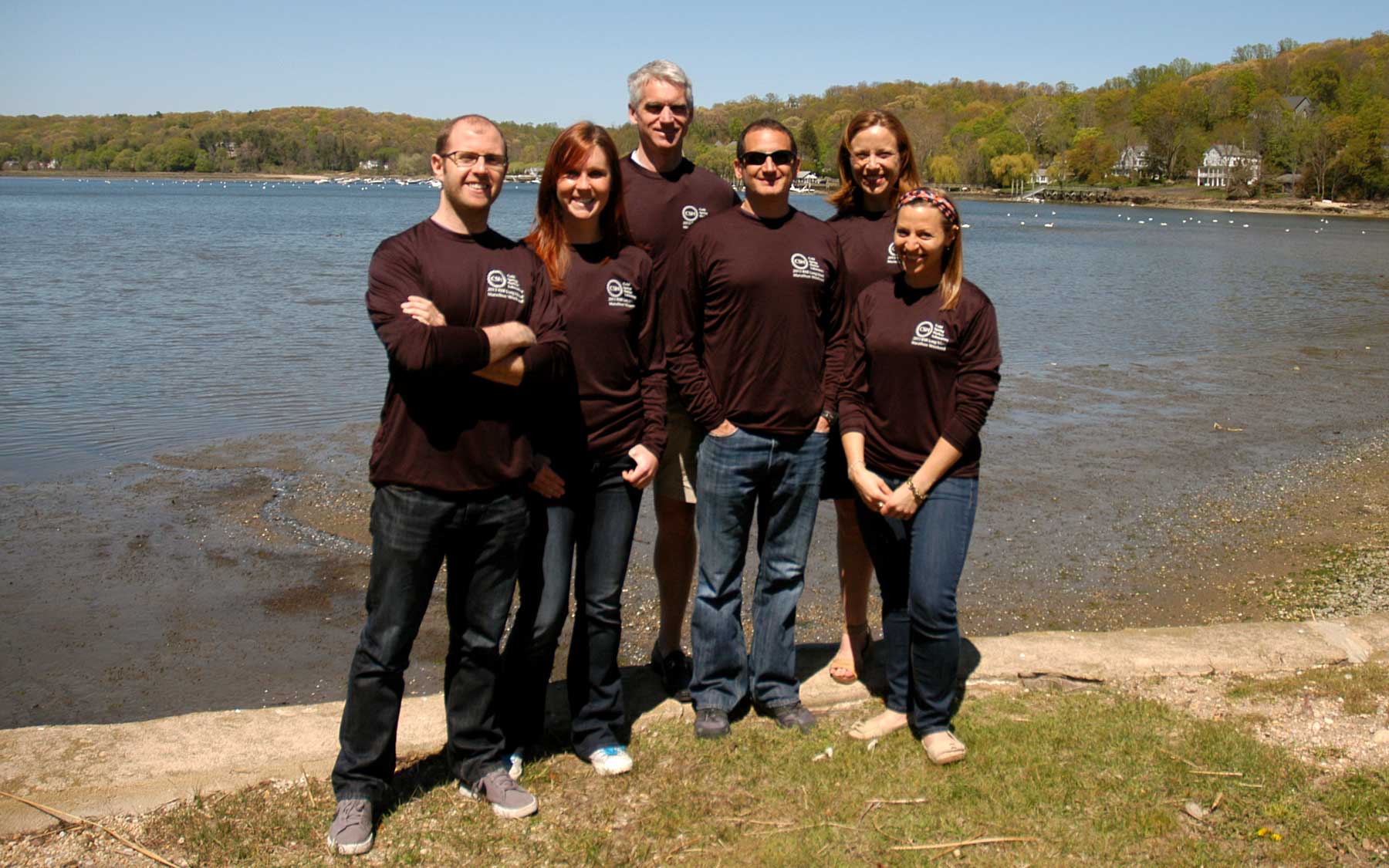 Team CSHL: l-r - Shane McCarthy (Research Investigator, half marathon), Leah Sabin (Postdoctoral Researcher, half marathon), Tim O’Neill (CSHLA Director, half marathon), Josh Dubnau (CSHL Associate Professor, 10K), Jessa Giordano (Public Affairs, 10K), Miriam Fein (Graduate Student, full marathon)
email envelop icontwitter icon share buttonfacebook icon share buttonlinkedin icon share button
I run. Not terribly far, and not every day, but enough so that I can say that I run. Every now and then I’ve gotten to run to raise money for various worthy causes, which has made the motivation to get out and run that much easier. So when the opportunity came up this year to raise money for this great place where I work, challenge myself a bit and do it all here on Long Island, I jumped at the chance.

Team CSHL was made up of CSHL employees, CSHL Association directors and donors along with about 30 runners from the Green Vale School. The idea to form a running team to raise money for the Lab came from CSHLA director Tim O’Neill and was quickly supported by fellow directors Marjorie Van de Stouwe and Maria de Lesseps.  Our first event would be the 2013 Long Island Marathon Weekend, held on Saturday and Sunday, May 4-5, 2013.  That would give us a chance to compete in a range of events: a 1-mile race, as well as races of 5K, 10K and full and half marathons.

In addition to recruiting runners and donors, Tim and Marjorie committed to run the half marathon and Maria got the Green Vale School’s running team, the “Pacers”, on board to send a group to run the 5K.

Starting this winter we runners all got our fundraising webpages set up with help from co-workers in CSHL’s Development department and started reaching out to friends and family—while also trying to keep to something like a training schedule in the midst of a series of winter storms.

I was surprised at how fruitful the response was after only a few emails and Facebook posts; many people who had never given to CSHL before took the opportunity to support me and my fellow runners and the Lab because it was so easy to do so at whatever level they were comfortable with. Meanwhile, I got a lot of practice running in the snow and in subfreezing temperatures (remember what I said about the added motivation? It’s a good thing that held true on some of the coldest days, as I had never run 6.2 miles all in a row before and couldn’t afford to take time off waiting for winter to be over.)

When asked about why they chose to run, Team CSHL had different reasons.  Shane McCarthy, a research investigator with Dick McCombie’s lab in CSHL’s Stanley Institute for Cognitive Genomics, mentioned the chance to raise  awareness about research on mental illness, “which affects many people close to us.”  Leah Sabin, a postdoc doing cancer research in Greg Hannon’s lab and dedicated runner said participating for her was “a no-brainer!” Miriam Fein, a Stony Brook grad student doing breast cancer research in Mikala Egelbad’s lab—who was running her 13th marathon!—spoke of the need to support the lab “research funding is so scarce.”

Neuroscientist Josh Dubnau, a running enthusiast who took part in the 10K, relished “ the sense of community between scientists and lab supporters who share a passion for running.”

When race day arrived we got glorious weather to enjoy with the other 8,000 participants. And let it be noted: We all finished, which is my book is a pretty decent accomplishment by itself.  For a first-time fundraiser, it was quite a success: Team CSHL raised $15,000 and is already looking at getting more people involved in 2014. Think of joining us next spring!