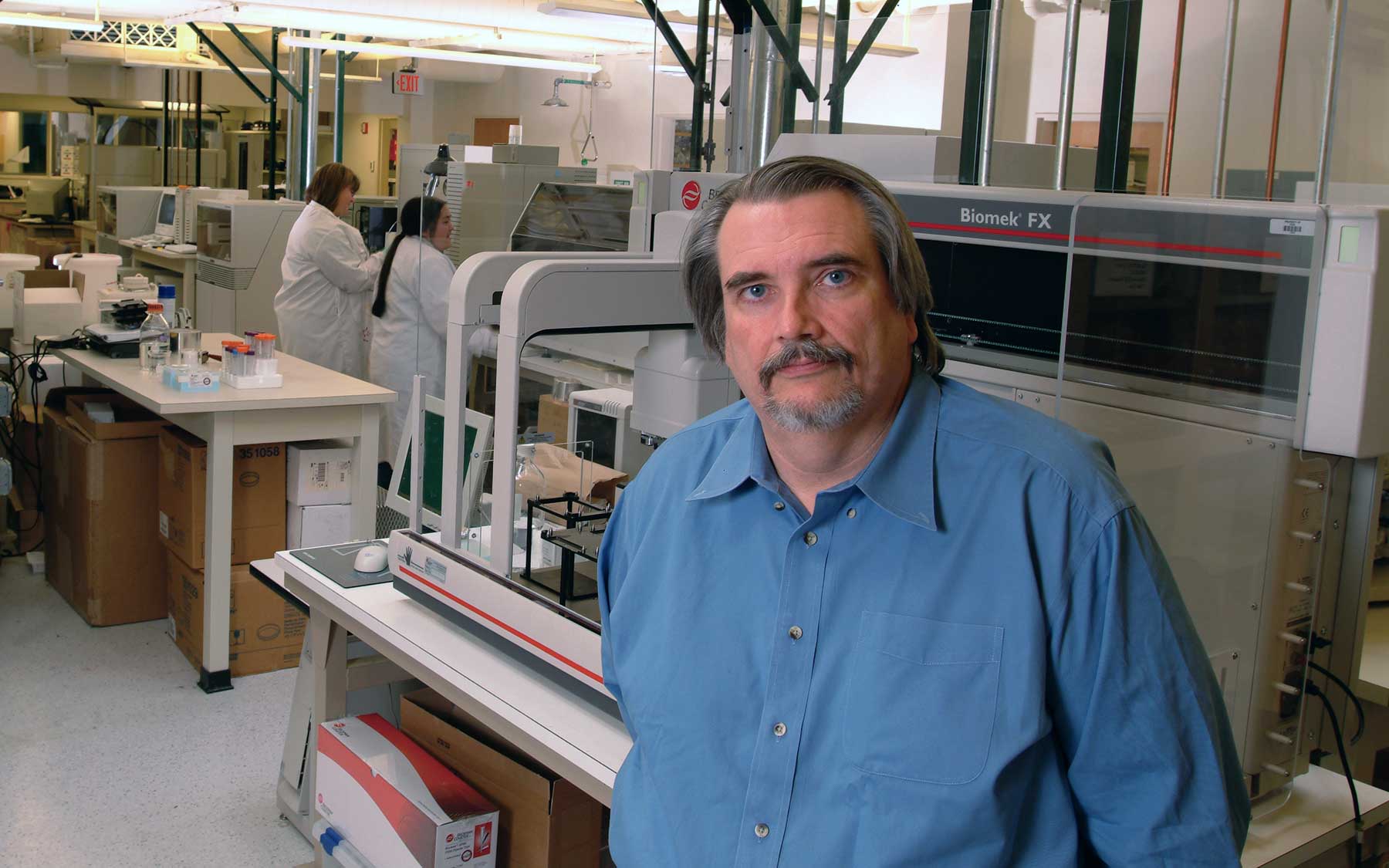 Dr. Richard W. McCombie, Director of CSHL's Woodbury Genome Center
email envelop icontwitter icon share buttonfacebook icon share buttonlinkedin icon share button
At CSHL’s Woodbury Genome Center a decade ago, it took 12 technicians working in two shifts and six “first generation” sequencing machines to sequence 70 million bases of DNA—repeats of A, T, G, C—in a single month. By 2007, as the Center began to acquire “second generation” machines, the output jumped up to 2 to 3 gigabases a month (1 gigabase = 1 billion bases). At the end of 2010, by which time 4 technicians manned 14 of these machines, that number stood at about 2.5 terabases a month (1 terabase = 1000 gigabases, or about 25 human genomes at high accuracy).

This spectacular leap in output has meant that in stark contrast to the 10 years that it took for the human genome project to produce the first draft of the human genetic code, CSHL scientists can sequence a human genome, for example, the genome of a patient with schizophrenia, in 1 to 2 weeks. As sequencing has become ubiquitous in research, it has dramatically changed the way CSHL’s scientific community studies human genetics and the way researchers studying cognitive disorders such as schizophrenia and various cancers dig into the genetic underpinnings of these diseases. “It’s become a totally different world,” says Dr. W. Richard McCombie, who directs the Genome Center.

That world is now poised to change again. As of June, CSHL became the only institution in the world (so far) to own two “third generation” sequencing machines, further boosting its position on the world map of genome sequencing centers. These instruments, made by California-based Pacific Biosciences, “is going to greatly increase our capabilities and give us a lot more flexibility in approaching various DNA sequencing challenges,” according to McCombie.

“On an institutional level, CSHL has benefitted enormously from being an early adopter of the latest innovations in next-generation sequencing,” says McCombie. “We were among the first five or 10 sites in the world to begin testing and using second-generation sequencing technology when it became available in early 2007 from the Cambridge England-based company, Solexa, which was later acquired by Illumina. We rapidly built on this technology and developed one of the first large-scale sites using these instruments. Based on this work, we were offered the opportunity to become a test site for one of the Pac Bio instruments.”

McCombie and others at CSHL were already favorably impressed with the new technology after closely following it at conferences over the last several years and discussing it with its inventor, Dr. Steve Turner, who lectures in CSHL’s annual course on advanced sequencing technologies and applications. The new machines differ considerably from CSHL’s other sequencers, in which the sample is amplified and then treated with chemical reagents that includes the four bases of DNA, each tagged with a different fluorescent marker or dye. After those dyes are incorporated, the reactions stop and a camera records dyes added to each cluster of molecules.  The cycle then repeats and the system’s software works out the sequence by determining the order in which each tagged based was added to each DNA cluster.

In contrast, the new machines record DNA sequences being synthesized in real-time by “spying” on a single molecule of polymerase—the enzyme that helps build a DNA strand at the rate of about 1 to 3 bases per second. The sequencing happens on a small, square device called a SMRT (Single Molecule Real Time) Cell that has a series of tiny holes, each surrounded by a well.

Each funnel-shaped hole, which looks like a tiny volcano under a high-powered microscope, has a single polymerase molecule fastened to its bottom and a liquid containing fluorescent-tagged DNA bases in the well surrounding it. The DNA piece to be sequenced is bound to the polymerase, and the machine’s sophisticated camera “watches” the addition of bases in real-time and captures the colors of bases as they react with the polymerase. The machine’s software translates this information into a sequence that researchers can analyze.

One of the machine’s strengths is that it can sequence much longer strings of DNA—about 2000 bases—at a time as compared to other types of next-generation sequencers. The ability to sequence “longer reads,” as they are known in sequencing vernacular, means researchers will have an easier time assembling the bits into one complete sequence.

McCombie plans to take advantage of this feature by using the machine to sequence new plant genomes, which are challenging because they are much larger than the human genome and are chock full of repeat segments of DNA. Says sequencing technician Stephanie Muller, “The many new projects that we have lined up will be in full swing once we’ve finished the current phase of testing out the machines and improving protocols by resequencing rice,” a crop whose genome was completely sequenced by CSHL researchers and other groups in 2005.

Another of the machine’s strengths—the ability to sequence stretches of DNA extremely quickly—will also come in handy for CSHL researchers needing to sequence a small number of genes from a large number of samples. For example, McCombie’s team is studying genetic variations—person-to-person differences in DNA—within a number of bipolar and schizophrenia-associated genes, including one called DISC1, by sequencing it in thousands of individuals to find rare variants that determine an individual’s risk for developing this disorder.

McCombie, who also leads the Stanley Center for Cognitive Genomics at CSHL, says the new machines will improve such studies by increasing speed and decreasing costs in the long run, and allow scientists to zoom in on changes in the DNA at a much better resolution than currently possible.

“By starting early with this new technology, we’ve not only helped improve it by providing feedback to the company, but also learned a lot about how to most effectively improve institution-wide research efforts,” says McCombie. He’s already getting emails from graduate students and postdocs who are cooking up new and exciting projects and want to adapt these projects to the Pac Bio platform. “I think getting in early really helps catalyze that creativity.”