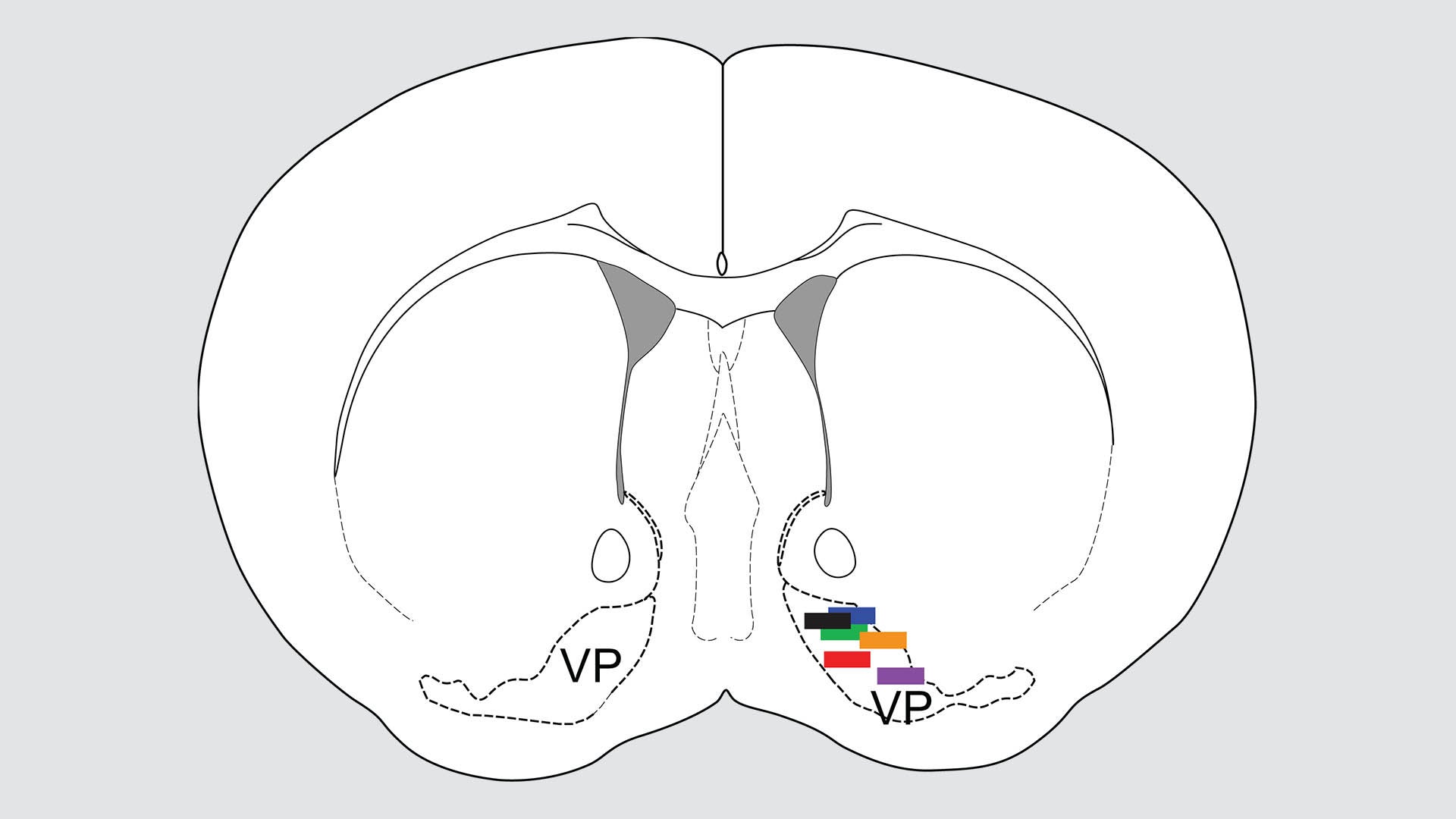 Researchers have zeroed in on the ventral pallidum (see VP in brain diagram), an information-processing hub in the brains of mice to discover how neurons there influence the animals’ motivation to either seek pleasurable experiences or avoid negative ones.
email envelop icontwitter icon share buttonfacebook icon share buttonlinkedin icon share button

As our brains take in information about the world and use it to steer our actions, two key principles guide our choices: seek pleasure and avoid pain. Researchers at Cold Spring Harbor Laboratory (CSHL) have zeroed in on an information-processing hub in the brains of mice to discover how neurons there divide the labor to handle these opposing behavioral motivations.

Their work, reported December 31, 2019 in the journal Neuron, reveals that different classes of neurons control positive and negative motivation, sending opposing signals along a shared motivation-processing brain circuit. Ultimately, the balance of activity between these two groups of cells may determine whether a person acts to seek out pleasurable experiences or avoid negative ones, says CSHL Professor Bo Li, who led the study.

Li wants to understand the brain’s motivation-processing circuits because the behaviors they control are often disrupted in people with mental illness. People suffering from depression may stop doing things that once gave them pleasure, for example, whereas people with anxiety disorders may go to greater lengths to avoid potential threats.

The ability to recognize and respond to potential rewards or punishments depends in part on a part of the brain called the ventral pallidum. Researchers have observed activity in this brain region when animals seek rewards, such as a sip of water, or avoid punishments, such as an annoying puff of air. What Li wanted to understand was how the different types of neurons that reside in this part of the brain ensure an animal responds appropriately to signals associated with both types of motivation.

To investigate, his team took advantage of research tools that allowed them to monitor the activity of individual brain cells and to confirm those cells’ identities with a flash of light. After training mice to associate certain sounds with either a sip of water or a puff of air, Li and his colleagues used the technique to monitor neural activity in the ventral pallidum. They found that neurons that used the neurotransmitter known as GABA to dampen activity in the circuit influencing motivation were important in motivating the mice to seek a water reward. The neurons that used the neurotransmitter known as glutamate to excite the brain circuit, on the other hand, were essential for avoiding the air-puff punishment.

In more complex situations, where animals were presented with the potential for both punishment and reward, both sets of neurons responded. Mice made different choices in response to the combined stimuli: Thirsty animals, for example, were more willing to risk an air puff to obtain a sip of water than animals that had just drunk their fill. But if the team artificially shifted the balance of activity in the ventral pallidum by manipulating one class of neurons or the other, they could alter the animals’ behavior.

That balance between signals that either inhibit or excite neurons in the ventral pallidum appears critical in controlling which motivation an animal acts on, Li says. Now, he is eager to find out whether it is disrupted in people with psychiatric disorders. “Behavioral changes in people with depression or stress-induced anxiety may be caused by changes in this circuit,” he says. With the new findings, his team has important leads about how to investigate the causes and symptoms of these disorders more deeply.

This research was funded by NARSAD, the National Institutes of Health, Human Frontier Science Program, the Stanley Family Foundations, the Simons Foundation, the Wodecroft Foundation, and the Feil Family Neuroscience Endowment.