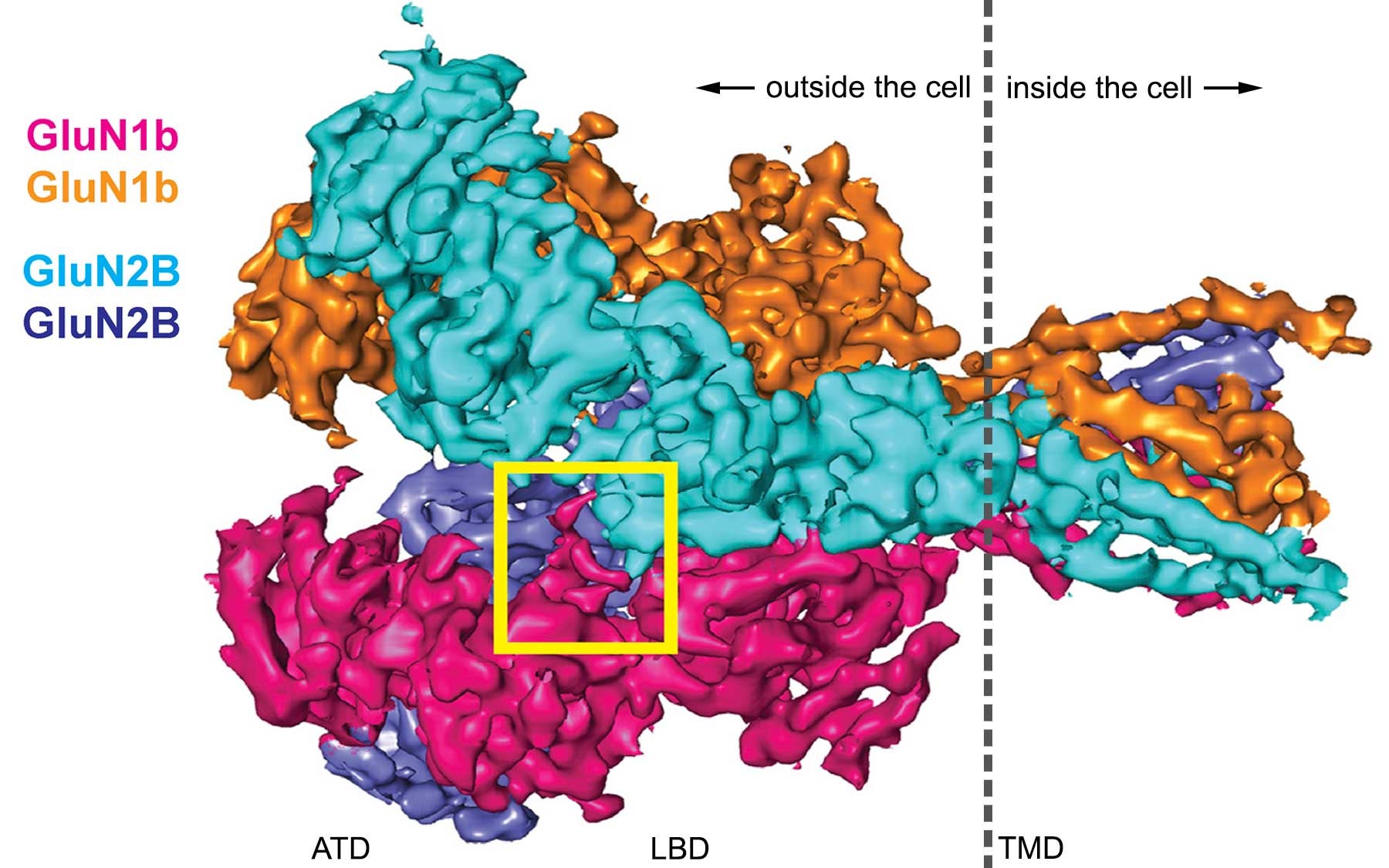 Structure of the full NMDA receptor, obtained via cryo-electron microscopy. Much of the structure rises above the cell's outer membrane (i.e., left of the dotted line), where it interacts with the surrounding environment. A structural variation of this key receptor, affecting the area in the yellow box, enables the overall structure to function when the local environment becomes highly acidic, as during a seizure or stroke.
email envelop icontwitter icon share buttonfacebook icon share buttonlinkedin icon share button

A variation in one of the proteins that comprises the brain's NMDA receptor enables a version of the receptor to function when the surrounding environment becomes highly acidic, as after a stroke or seizure.

Cold Spring Harbor, NY — During a stroke or an epileptic seizure, neurons in affected parts of the brain fire at an abnormally rapid rate. One byproduct of this condition is that the pH of the brain drops markedly, rendering the local environment inhospitably acidic.

Using a powerful microscopy method called cryo-EM, biologists at Cold Spring Harbor Laboratory (CSHL) have discovered how one key element of brain physiology, a docking port for excitatory neurotransmitters called the NMDA receptor, is able to function in this hostile environment.

A team led by CSHL Professor Hiro Furukawa has published high-resolution images of a variant of the NMDA receptor that is adapted to functioning at low pH. “We’ve known for at least 20 years that different types of NMDA receptors work distinctly, especially in an acidified environment created by seizure and stroke,” says Furukawa. “Until now, we haven’t understood the underlying molecular mechanism.”

NMDA receptors sit on the membrane of excitatory neurons, where they form pores and control electrical signals by “gating” the flow of electrically charged atoms, or ions, in and out. NMDA receptors are active when the brain is learning and forming new memories. Malfunctions of the receptor are thought to be involved in a range of illnesses including neurodegenerative diseases, pain, depression and schizophrenia.

Furukawa’s team shows how NMDA receptors can vary slightly in their protein makeup thanks to a cellular mechanism called alternative splicing—a process that enables a single gene to generate distinct variants of a single protein. One “splice variant” of the receptor that is present in the brain turns out to be less sensitive than other versions to an acidic environment.

The NMDA receptor is what scientists call a tetramer—think of it as a tube composed of four proteins that connects the inside of a neuron with the outside environment. The four proteins are intertwined in such a way that they leave an open space running through their center—the ion channel.

The four proteins of the receptor come in two sets of two—“subunits” called GluN1 and GluN2. Furukawa’s team imaged a variant of the receptor in which a portion of the GluN1 subunit is altered slightly. This alteration changes the architecture of the receptor, by drawing the GluN1 and GluN2 subunits into a tighter embrace. This, in turn, alters an interface with a part of the larger structure where a pH sensor is located.

The result is that the entire receptor becomes less sensitive to changes in pH. “We’ve learned from nature how this receptor is able to remain intact and function when the environment turns hostile,” says Furukawa. “Research like this informs efforts to create therapeutics that address malfunctions in this important receptor.”

Regan MC et al, “Structural Mechanism of Functional Modulation by Gene Splicing in NMDA Receptors,” was published in Neuron May 2, 2018.

A variation in one of the proteins that comprises the brain's NMDA receptor enables a version of the receptor to function when the surrounding environment becomes highly acidic, as after a stroke or seizure. 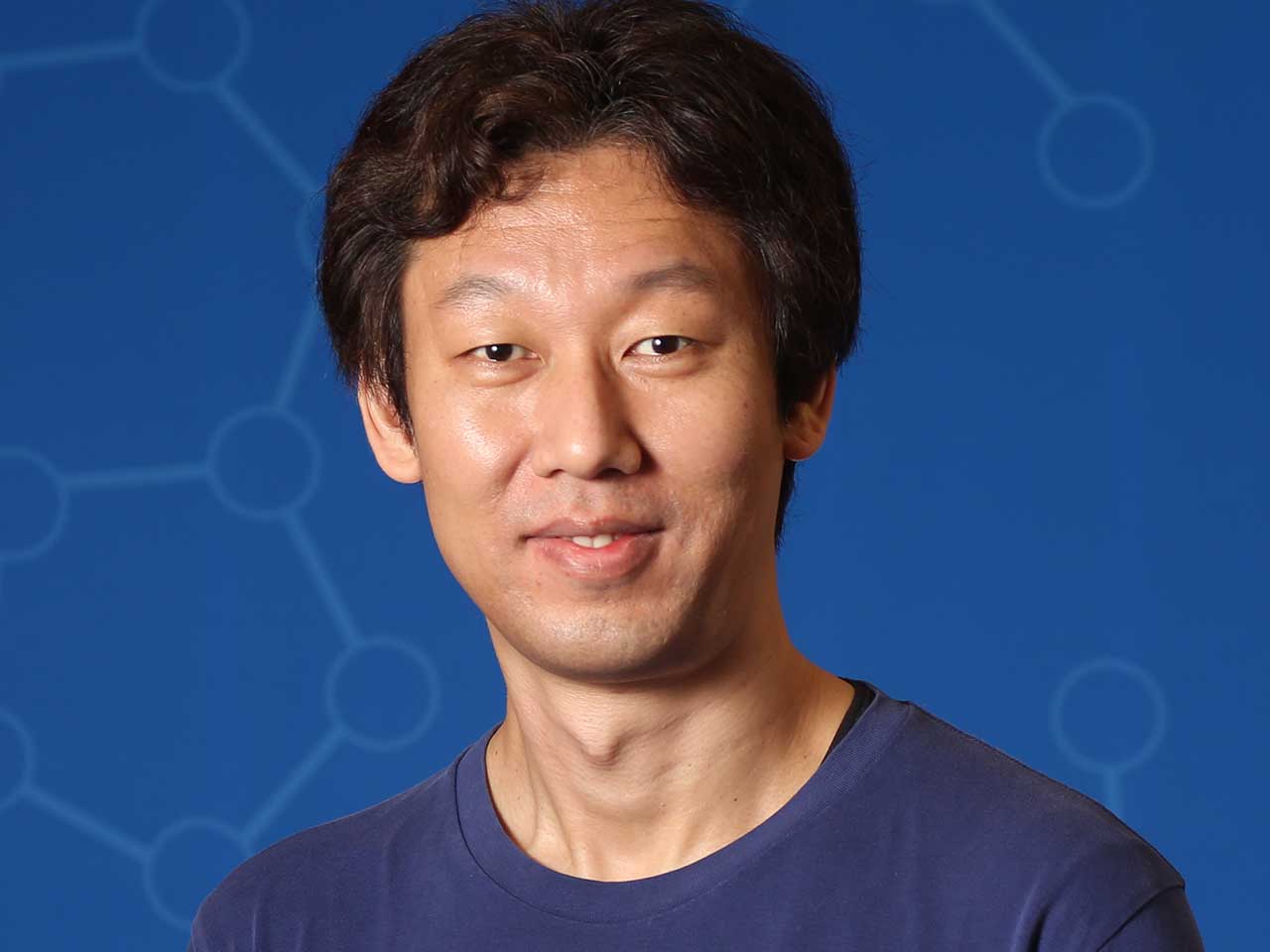