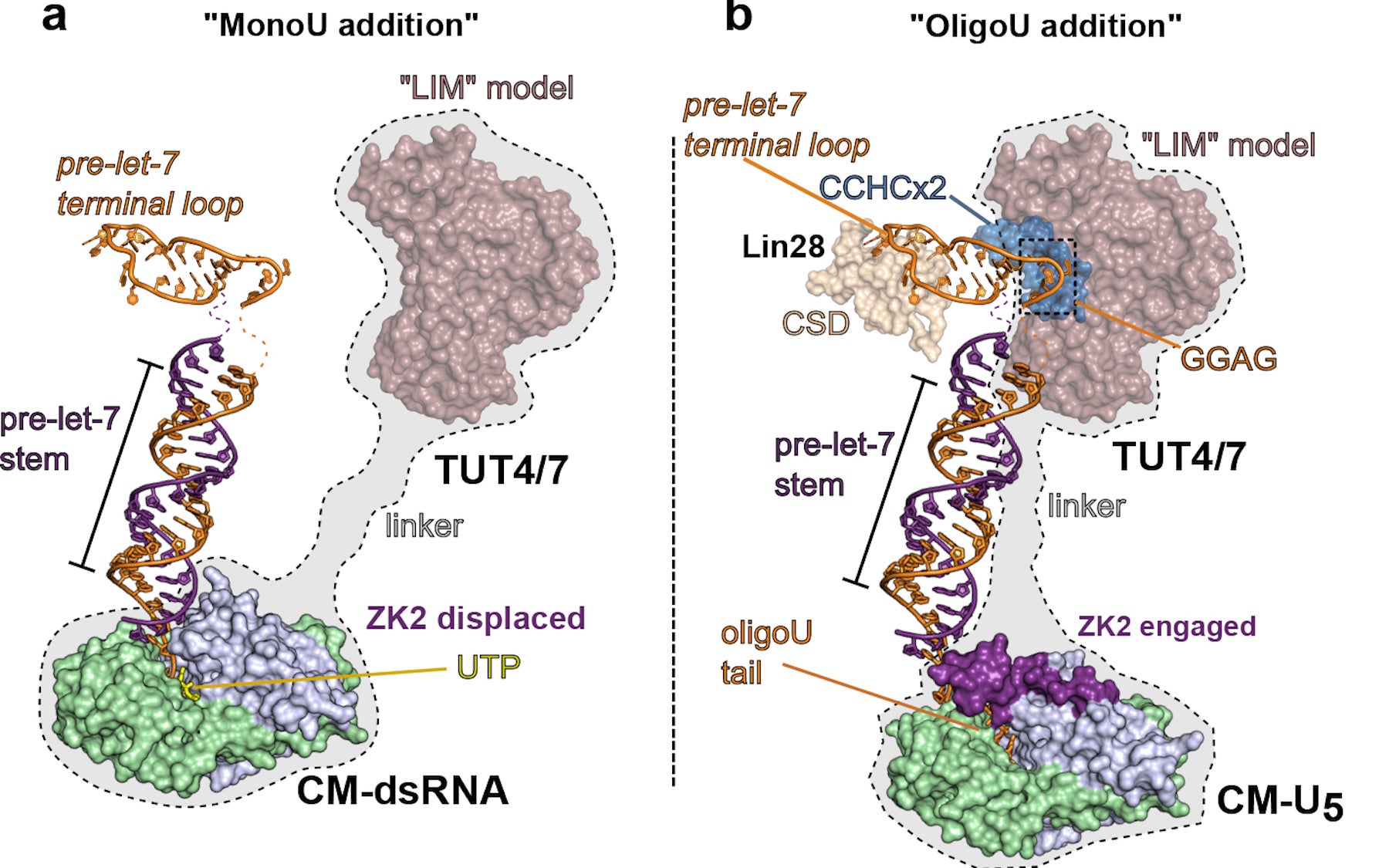 Using x-ray crystallography, Joshua-Tor’s team has captured the equivalent of freeze-frames of enzymes called TUTases in two different modes. In one mode (LEFT), the TUTase enzyme (consisting of pink and blue/green subunits surrounded by a dotted line) adds a single uridine (“U”) nucleotide to a precursor of the micro RNA let-7 (purple and orange helix). The addition of a single “U” leads to the production of a mature let-7 micro RNA, in turn supporting the process in which a stem cell differentiates into a specialized cell. In its other mode (RIGHT) a TUTase enzyme associates with a protein called Lin28, leading to the addition of 30 “U”s to a let-7 precursor. This targets it for destruction – essential for stem cells to retain their ability to proliferate indefinitely. The TUTases are potential targets in cancer cells, which seem to acquire the stem-like ability to proliferate.
email envelop icontwitter icon share buttonfacebook icon share buttonlinkedin icon share button

Freeze-frame images of a class of enzymes called TUTases, obtained at the resolution of individual atoms, shows them interacting with other molecules to regulate an RNA molecule called let-7 that is a target of new anti-cancer research.

TUTase enzymes interact with let-7, a regulator of development; targeting them could help control certain cancers

Cold Spring Harbor, NY — Over millions of years of evolution, cells have developed myriad ways of regulating the processes that enable them to thrive. Especially useful tools have been saved, or “conserved,” over the eons, so that today we can find them in a broad spectrum of life forms, from the very primitive to the most complex.

Research published July 3, 2017 by structural biologists at Cold Spring Harbor Laboratory (CSHL) sheds light on how one such conserved mechanism works, with implications for the development of new cancer drugs.

Led by CSHL Professor and Howard Hughes Medical Institute Investigator Leemor Joshua-Tor, the team used x-ray crystallography to capture the equivalent of freeze-frames of a class of enzymes called TUTases. The pictures, at the resolution of individual atoms, shows them interacting with other molecules to regulate the activity of an important small RNA molecule called let-7.

Let-7, a microRNA, is a regulator of genes important in development. When expressed in humans, it’s part of the process in which our stem cells differentiate into the various specialized cell types that populate our organs. In contexts in which it’s important for stem cells to maintain their “stem-ness”—their ability to give rise indefinitely to more stem cells—let-7 needs to be deactivated.

Let-7 is of special interest because its deactivation in cancer cells is thought by some to confer upon those cells the stem cell-like property of being able to proliferate indefinitely. This has focused attention on understanding the mechanisms regulating whether let-7 is active or inactive.

The team’s pictures show how TUT4 and TUT7—two of the TUTase enzymes—act differently in the two contexts. In a differentiating cell, the TUTases correct a small genetically induced defect in the sequence of many let-7 precursors, enabling mature let-7 microRNAs to be generated. Those defects are ameliorated when a TUTase adds a single uridine (“U”) molecule to the sequence of a let-7 precursor.

In a stem cell destined to retain its stem-ness, one of the TUTases adds not one but 30 uridines to the let-7 precursor, in this way marking it for destruction by another enzyme. “We have been able to capture the TUTases in these two different modes of action,” says Joshua-Tor.

Joshua-Tor explains that TUTases are promising targets for new cancer therapies. In kidney and lung cancer cells, for example, in which let-7 levels are far below normal, TUTases involved in marking let-7 for destruction could perhaps be inhibited. Having extremely high-resolution images of how they act in the molecular dance should help in that effort.

The work was supported by NIH grant R01-GM114147; the Cold Spring Harbor Laboratory Women in Science Award; and the Watson School of Biological Sciences.

“Multi-domain utilization by TUT4 and TUT7 in control of let-7 biogenesis” appears July 3, 2017 in Nature Structural and Molecular Biology. The authors are: Christopher R. Faehnle, Jack Walleshauser and Leemor Joshua-Tor. The paper can be accessed at: http://www.nature.com/nsmb/index.html

Freeze-frame images of a class of enzymes called TUTases, obtained at the resolution of individual atoms, shows them interacting with other molecules to regulate an RNA molecule called let-7 that is a target of new anti-cancer research.

LIVE At the Lab: Defeating Cancer in the Pacific Islands