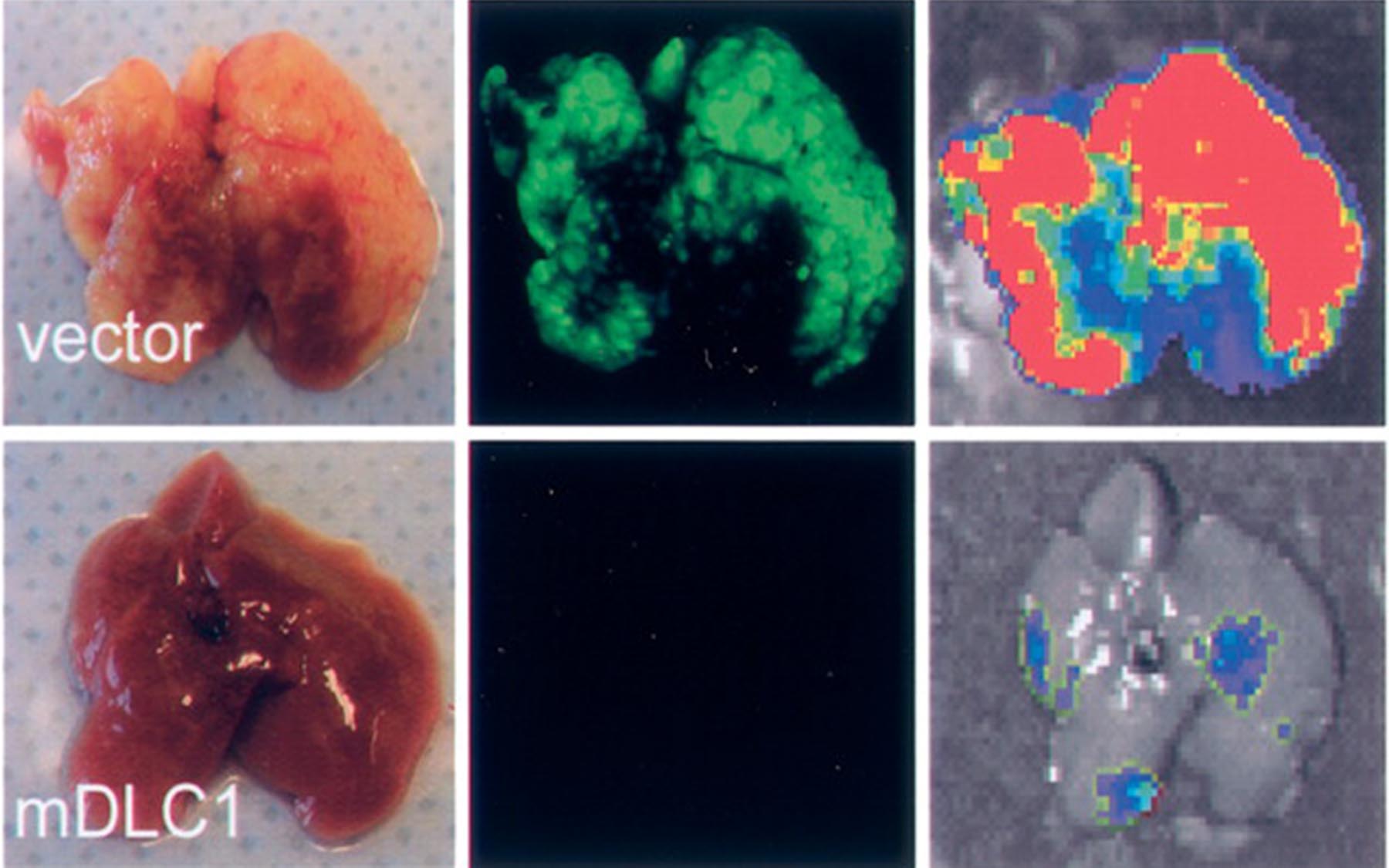 Cold Spring Harbor, NY — Scientists at Cold Spring Harbor Laboratory (CSHL) have taken the search for cancer-causing genes an important step forward. In a newly published paper, they confirm that a gene called DLC1 is a tumor suppressor. They have demonstrated in living mice that its deletion, inactivation or loss precipitates events culminating in an aggressive type of liver cancer closely related to common human epithelial cancers of the liver (also known as hepatocellular carcinoma, or HCC).

The team’s success in tracing the intricate pathway by which DLC1 functions in both healthy and pathological states suggests a highly specific new target for future anticancer drugs.

Focusing on a Suspected Tumor Suppressor

Tumor suppressor genes play a vital role in intracellular signaling networks that protect against uncontrolled cell growth and proliferation. Such genes can be rendered inactive by a variety of DNA alterations, including deletions, mutations and so-called epigenetic changes in DNA’s chemical configuration. DLC1—a gene whose acronym reflects prior suspicions that it was “deleted in liver cancer”—was known to be located in a region of chromosome 8 that has been observed to be missing in past studies of mammalian liver cancer cells.

“The region in question is a large one that may harbor more than one tumor suppressor,” said Dr. Scott W. Lowe. “We set out to conclusively identify DLC1 as a tumor suppressor, which had not been done before, and to show at the molecular level how the absence of this gene produces pathology in cells that can lead to liver cancer. Interestingly, loss of DLC1 is observed in a range of epithelial cancers, which suggests that DLC1 may a play common role in many types of human cancer.”

Connecting the Gene to Liver Cancers

To prove that DLC1 was causally implicated in specific cancers, the team genetically engineered mouse liver cells in which the gene was not expressed. Short-hairpin RNAs (shRNAs) were designed to “knock down” DLC1 expression in vivo. When the DLC1 shRNAs are introduced into normal mouse liver cells, the production of DLC1 protein is blocked, or ‘silenced.’ The team observed that nearly all of the mice whose livers had been transplanted with the engineered cells developed liver cancer, and that the gene’s reintroduction stopped the cancer.

However, this was only the beginning of the experimental road, for it is not simply the absence of the DLC1 protein that causes tumorigenesis. In fact, abnormally low levels of the protein, or its complete absence, induces a complex series of interrelated events, as Dr. Lowe and colleagues demonstrated. The protein encoded by the DLC1 gene belongs to regulators of a large family of enzymes called small Rho GTPases that act as molecular switches.

Using a mechanism called RNA interference to control the expression of specific genes, the team effectively turned the DLC1 “switch” on and off in living mice cells, and in so doing was able to isolate one particular signaling intermediary whose presence was both necessary and sufficient to set the cell on an uncontrolled growth path. This essential molecular intermediary is called RhoA.

When the DLC1 gene is absent in a cell, RhoA is activated, effectively removing a brake on tumor initiation. Whether the experimenters knocked down the DLC1 gene or in separate experiments activated RhoA, the result was the same: the promotion of liver cancer. Specifically, the team demonstrated that RhoA is required for maintaining the tumor-formation process stimulated by the deletion of the DLC1 gene.

“This suggests an opportunity for molecularly targeted therapies,” Dr. Lowe said. “For a variety of reasons, tumor suppressors like DLC1 are not amenable to direct therapeutic targeting. But we may be able to readily target cancer-promoting molecules like RhoA that are ‘downstream’ in the signaling cascade.

“Our data show that RhoA is required for maintenance of at least some tumors driven by DLC1 loss, and also that cells with disabled DLC1 are particularly sensitive to inhibitors that target at least one of the molecular ‘effectors’ that renders RhoA active. We know that DLC1 is frequently lost in human epithelial cancers. This suggests that drug intervention in the signaling pathways modulated by DLC1 may have broad therapeutic utility.”