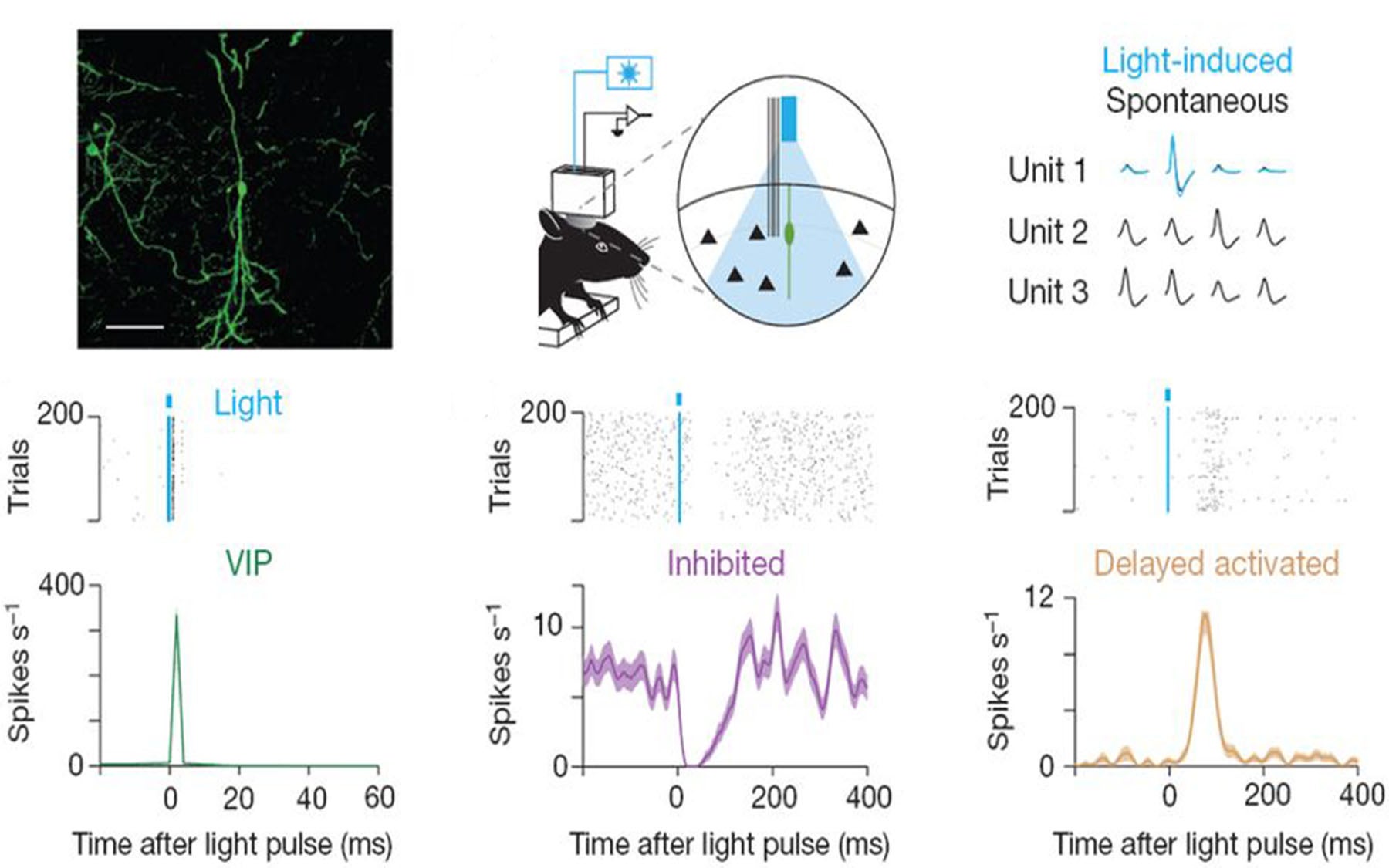 Cold Spring Harbor, NY — The cerebral cortex contains two major types of neurons: principal neurons that are excitatory and interneurons that are inhibitory, all interconnected within the same network. New research now reveals that one class of inhibitory neurons—called VIP interneurons—specializes in inhibiting other inhibitory neurons in multiple regions of cortex, and does so under specific behavioral conditions.

The new research finds that VIP interneurons, when activated, release principal cells from inhibition, thus boosting their responses. This provides an additional layer of control over cortical processing, much like a dimmer switch can fine-tune light levels.

The discovery was made by a team of neuroscientists at Cold Spring Harbor Laboratory (CSHL) led by Associate Professor Adam Kepecs, Ph.D. Their research, published online today in Nature, shows that neurons expressing vasoactive intestinal polypeptide, or VIP, provide disinhibition in the auditory cortex and the medial prefrontal cortex.

The researchers used molecular tagging techniques developed by team member Z. Josh Huang, a CSHL Professor, to single out VIP-expressing neurons in the vast diversity of cortical neurons. This enabled Kepecs’ group, led by postdocs Hyun Jae Pi and Balazs Hangya, to employ advanced optogenetic techniques using color-coded laser light to specifically activate VIP neurons. The activity of the cells was monitored via electrophysiological recordings in behaving animals to study their function, and in vitro to probe their circuit properties.

These VIP neurons are long sought “disinhibitory” cells: they inhibit other classes of inhibitory neurons; but they do not directly cause excitation to occur in brain. Dr. Kepecs and colleagues propose that the disinhibitory control mediated by VIP neurons represents a fundamental “motif” in cerebral cortex.

The difference between neural excitation and disinhibition is akin to the difference between hitting the gas pedal and taking your foot off the breaks. Cells that specialize in releasing the brakes, Dr. Kepecs explains, provide the means for balancing between excitation and inhibition.  Kepecs calls this function “gain modulation,” which brings to mind the fine control that a dimmer switch provides.

The team wondered when VIP neurons are activated during behavior. When, in other words, is the “cortical dimmer switch” engaged? To learn the answer the scientists recorded VIP neurons while mice were making simple decisions, discriminating between sounds of different pitches. When they made correct choices, the mice earned a drop of water; for incorrect choices, a mild puff of air. Surprisingly, the team found that in auditory cortex, a region involved in processing sounds, VIP neurons were activated by rewards and punishments. Thus these neurons appeared to mediate the impact of reinforcements and “turn up the lights” on principal cells, to use the dimmer-switch analogy.

The research described in this release was supported by grants from: NIH NINDS; the Klingenstein, John Merck, and Sloan Foundations; the Swartz Foundation and Marie Curie International Outgoing Fellowship within the EU Seventh Framework Programme for Research and Technological Development; The Robert Lee and Clara Guthrie Patterson Trust Postdoctoral Fellowship and Human Frontier Science Program.

“Cortical interneurons that specialize in disinhibitory control” appears online ahead of print in Nature October 6, 2013 at 1pm ET.  The authors are: Hyun-Jae Pi, Balázs Hangya, Duda Kvitsiani, Joshua I. Sanders, Z. Josh Huang and Adam Kepecs.  The paper can be obtained at:  http://dx.doi.org/10.1038/nature12676