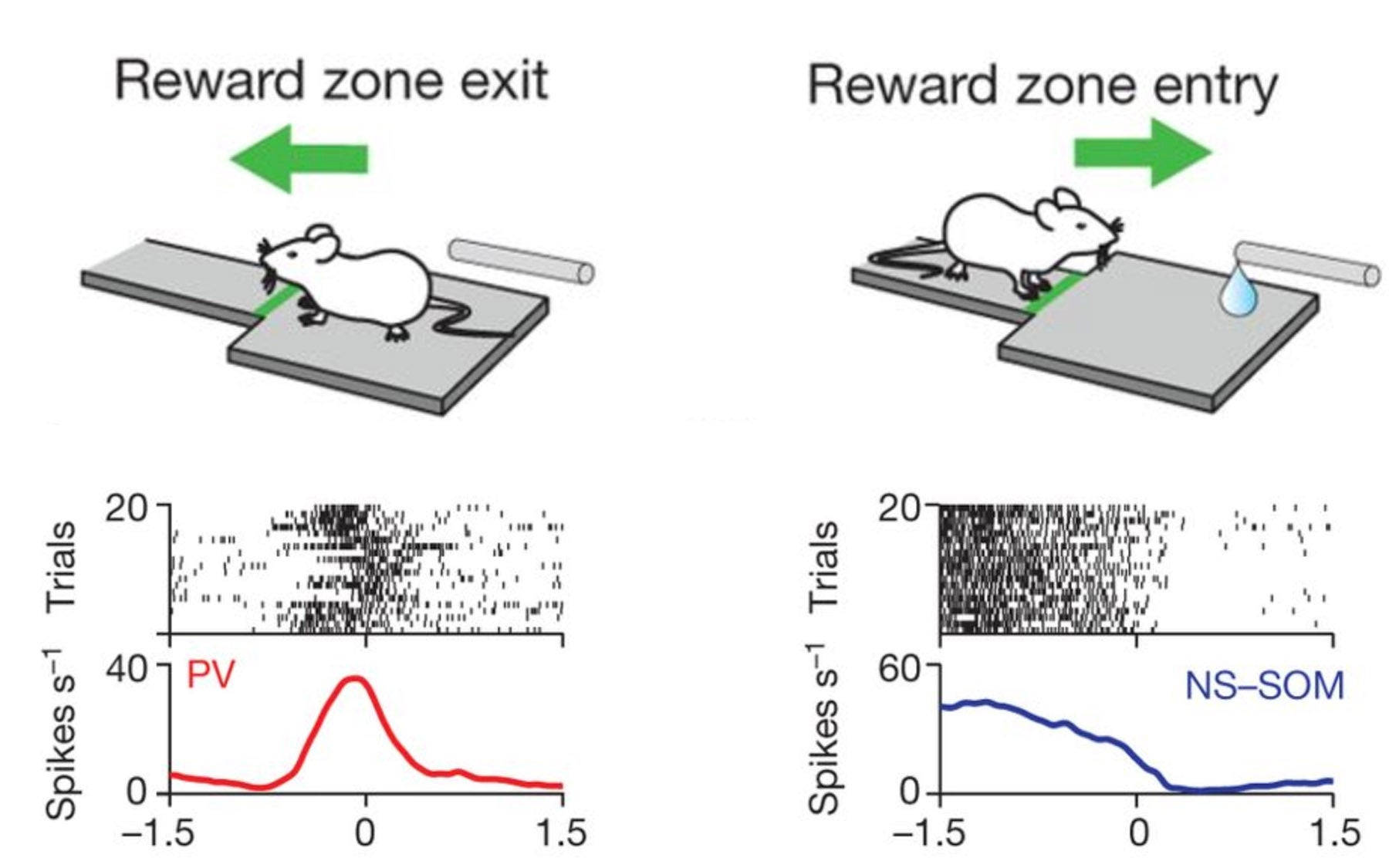 The activity of two types of inhibitory nerve brain cells, PV and SOM neurons, correlates with decisions made during 'foraging' behavior in mice. On the left a mouse has decided to leave the water reward area and the PV neurons have increased activity, shown by the uptick in ‘spikes’ of nerve impulses (PV; red). On the right, a mouse has decided to enter the water reward zone, which correlates with a decrease in SOM (NS-SOM; blue) neuron activity. The activity of these neurons is linked 'stay' or 'go' decisions during foraging behavior. Adapted from figure 3 in the paper.
email envelop icontwitter icon share buttonfacebook icon share buttonlinkedin icon share button

Cold Spring Harbor, NY — You are sitting on your couch flipping through TV channels trying to decide whether to stay put or get up for a snack. Such everyday decisions about whether to “stay” or to “go” are supported by a brain region called the anterior cingulate cortex (ACC), which is part of the prefrontal cortex. Neuroscientists from Cold Spring Harbor Laboratory (CSHL) have now identified key circuit elements that contribute to such decisions in the ACC.

CSHL Assistant Professor Adam Kepecs and his team today publish results that, for the first time, link specific cortical cell types to a particular behavior pattern in mice—a “stay or go” pattern called foraging behavior. The paper, published online in Nature, shows that the firing of two distinct types of inhibitory neurons, known as somatostatin (SOM) and parvalbumin (PV) neurons, has a strong correlation with the start and end of a period of foraging behavior.

Linking specific neuronal types to well-defined behaviors has proved extremely difficult. “There’s a big gap in our knowledge between our understanding of neuron types in terms of their physical location and their place in any given neural circuit, and what these neurons actually do during behavior,” says Kepecs.

Part of the problem is the technical challenge of doing these studies in live, freely behaving mice. Key to solving that problem is a mouse model developed in the laboratory of CSHL Professor Z. Josh Huang. The mouse has a genetic modification that allows investigators to target a specific population of neurons with any protein of interest.

Kepecs’ group, led by postdocs Duda Kvitsiani and Sachin Ranade, used this mouse to label specific neuron types in the ACC with a light-activated protein—a technique known as optogenetic tagging. Whenever they shone light onto the brains of the mice they were recording from, only the tagged PV and SOM neurons responded promptly with a ‘spike’ in their activity, enabling the researchers to pick them out from the vast diversity of cellular responses seen at any given moment.

The team recorded neural activity in the ACC of these mice while they engaged in foraging behavior. They discovered that the PV and SOM inhibitory neurons responded around the time of the foraging decisions—in other words whether to stay and drink or go and explore elsewhere. Specifically, when the mice entered an area where they could collect a water reward, SOM inhibitory neurons shut down and entered a period of low-level activity, thereby opening a ‘gate’ for information to flow in to ACC. When the mice decided to leave that area and look elsewhere, PV inhibitory neurons fired and abruptly reset cell activity.

“The brain is complex and continuously active, so it makes sense that these two types of inhibitory interneurons define the boundaries of a behavior such as foraging, opening and then closing the ‘gate’ within a particular neural circuit through changes in their activity,” says Kepecs.

This is an important advance, addressing a problem in behavioral neuroscience that scientists call “the cortical response zoo.” When researchers record neural activity in cortex during behavior, and they don’t know which type of neurons they are recording from, a bewildering array of responses is seen. This greatly complicates the task of interpretation. Hence the significance of the Kepecs team’s results, for the first time showing that specific cortical neuron types can be linked to specific aspects of behavior.

“We think about the brain and behavior in terms of levels; what the cell types are and the circuits or networks they form; which regions of the brain they are in; and what behavior is modulated by them,” explains Kepecs. “By observing that the activity of specific cell types in the prefrontal cortex is correlated with a behavioral period, we have identified a link between these levels.”

The research described in this release was supported by the following grants and funding agencies: Sloan, Whitehall and Klingenstein Foundations to A.K. and the NIH NINDS (NS075531). B.H. received support from the Swartz Foundation and Marie Curie International Outgoing Fellowship within the EU Seventh Framework Programme for Research and Technological Development (2007-2013). D.K. received support from The Robert Lee and Clara Guthrie Patterson Trust Postdoctoral Fellowship and Human Frontier Science Program (2008-2011).

“Distinct behavioural and network correlates of two interneuron types in prefrontal cortex” is published online in Nature on May 26, 2013.  The authors are: D. Kvitsiani, S. Ranade, B. Hangya, H. Taniguchi, Z. J. Huang, A. Kepecs. The paper can be obtained online at doi:10.1038/nature12176.