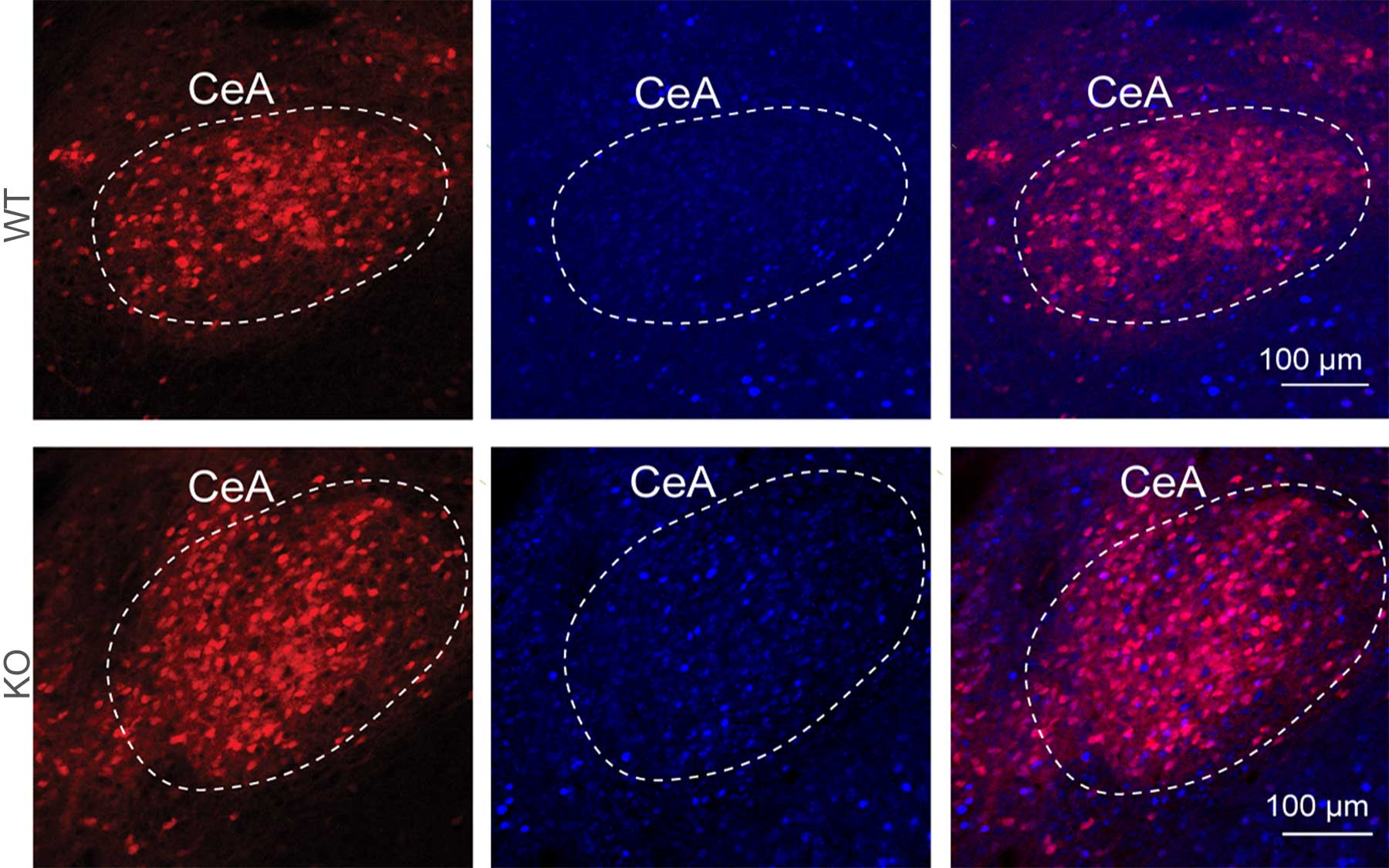 Anxiety was traced by the CSHL team to the brain's central amygdala, and to increased excitation of neurons that express the peptide somatostatin (SOM+ neurons). This initial step is demonstrated in these images, by comparing the amount of pink and blue fluorescence in the bottom right frame as compared with the frame directly above it, showing the central amygdala in mice not experiencing anxiety. The full pathway involves additional steps and identifies dynorphin, a signaling molecule, as a possible anti-anxiety drug target.
email envelop icontwitter icon share buttonfacebook icon share buttonlinkedin icon share button

Researchers have identified a circuit in the brain's central aymgdala that drives anxiety. The findings reveal a peptide, dynoprhin, as a potential target for future anti-anxiety drugs.

Cold Spring Harbor, NY — Neuroscientists at Cold Spring Harbor Laboratory (CSHL) have identified a neural circuit in the amygdala, the brain’s seat of emotion processing, that gives rise to anxiety. Their insight has revealed the critical role of a molecule called dynorphin, which could serve as a target for treatment of anxiety-related disorders including post-traumatic stress disorder (PTSD).

Though they are distinct, fear and anxiety operate hand in hand, as anxiety almost always follows brief fearful experiences and can in turn influence fear responses to a perceived threat. However, very intense fearful experiences, especially those that are life threatening, are often “over-learned” and can lead to an unhealthy level of anxiety or to anxiety disorders. Such brain disorders affect about 18% of the adult U.S. population.

Previous studies indicate that two regions in the amygdala—the central amygdala and the BNST (bed nucleus of the stria terminalis)—coordinate short-term and long-term responses to various kinds of threatening stimuli. “What we haven’t known are the underlying circuit and cellular mechanisms in these regions that control the generation of anxiety,” says CSHL Professor Bo Li, who led the research.

The central amygdala forges strong inhibitory connections with the BNST. To learn about what happens to these connections during anxiety, his team genetically manipulated one specific type of neuron called SOM+ because of a peptide they express called somatostatin. Li’s prior work showed that these SOM+ neurons are necessary for the learning of fear responses. The team knocked out a gene called Erbb4 in SOM+ neurons—a gene that’s been linked to disorders including bipolar disorder and schizophrenia.

Sandra Ahrens, a postdoctoral investigator in the Li lab, led experiments showing that when Erbb4 was deleted from SOM+ neurons in the central amygdala, mice displayed heightened anxiety. The team traced the mechanism behind this anxiety within a circuit that runs between the central amygdala and the BNST.

The process leading to anxiety began with increased excitation of SOM+ neurons in the central amygdala. This led to a large increase in signaling by dynorphin, a peptide made by these neurons. This aberrant signaling interfered with normal inhibition of SOM+ neurons in the BNST and resulted in their becoming overactive. The net result was a display of anxious behavior.

Dynorphin signaling was in this way identified as the driver of elevated anxiety. The team not only showed this in mice with neurons lacking Erbb4, but also, importantly, in genetically normal mice that were exposed to stress. “That’s why we think this is an important circuit in anxiety,” says Li. “By manipulating it in mice, we are actually able to ameliorate anxiety.”

Li states: “Our results suggest that dynorphin can drive anxiety and therefore could be a cellular target for treating increased anxiety induced by stress. Our next step is to understand whether the receptors for dynorphin are expressed in the SOM+ neurons in the central amygdala itself or if they’re expressed by some other inputs onto the BNST.”

Ahrens S et al, “A central extended amygdala circuit that modulates anxiety” appears online ahead of print May 29, 2018 in The Journal of Neuroscience.

Researchers have identified a circuit in the brain's central aymgdala that drives anxiety. The findings reveal a peptide, dynoprhin, as a potential target for future anti-anxiety drugs.