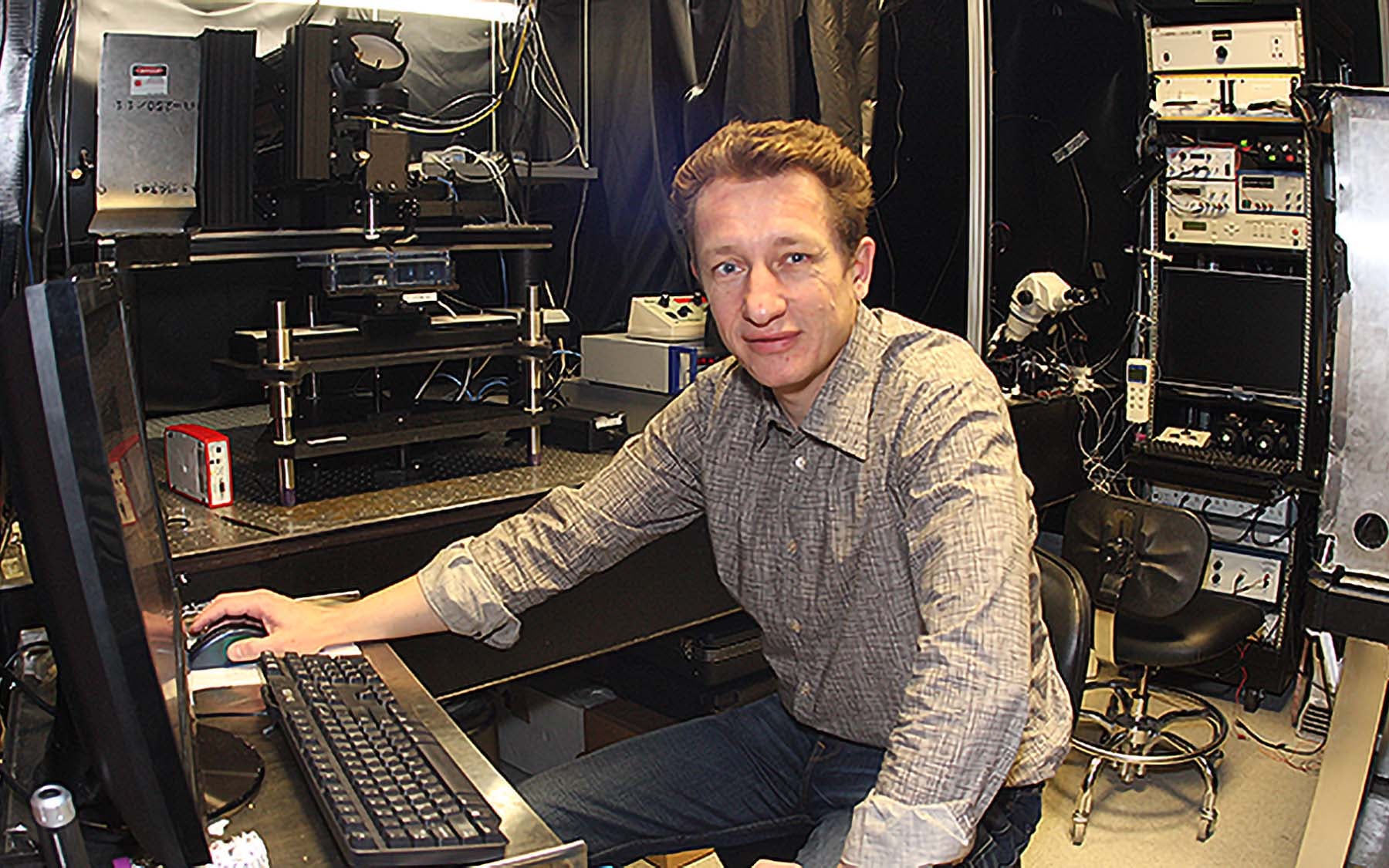 Dr. Pavel Osten is one of two CSHL principal investigators (the other is Dr. Greg Hannon) who were funded by NIH today to direct projects in President Obama’s BRAIN Initiative. Osten’s lab focuses on the identification and analysis of brain regions, neuronal circuits and connectivity pathways that drive complex behaviors and may be disrupted in autism and schizophrenia. Osten is pictured here with an instrument of his own design that performs serial two-photon (STP) tomography, an advanced automated method for imaging entire mouse brains, used to map brainwide neuronal activation evoked by various behaviors, including social behavior.
email envelop icontwitter icon share buttonfacebook icon share buttonlinkedin icon share button

Cold Spring Harbor, NY — Four scientists at Cold Spring Harbor Laboratory (CSHL) will perform research in President Obama’s BRAIN Initiative under two new CSHL grants announced in Washington today. The CSHL grants are among more than 100 issued by the National Institutes of Health (NIH), totaling $46 million for the 2014-15 fiscal year. They are NIH’s initial funding for the BRAIN Initiative.

The Brain Research through Advancing Innovative Neurotechnologies Initiative was launched by the President in the spring of 2013. It seeks to revolutionize our understanding of the human brain and ultimately provide researchers with fundamental insights necessary for treating a wide variety of brain disorders like Alzheimer’s, schizophrenia, autism, epilepsy, and traumatic brain injury.

“We congratulate four members of the CSHL faculty—Drs. Pavel Osten and Gregory Hannon, who were named lead investigators, and Partha Mitra and Florin Albeanu, who will join in advanced neuroscience research under the grants announced today,” said Dr. Bruce Stillman, President and CEO of CSHL. “The technological prowess they have demonstrated in their work at CSHL will be applied to the development and application of transformative tools to map the living human brain and understand how individual cells and complex neural circuits interact in both time and space,” he noted.

Three of the BRAIN grants announced today involve CSHL investigators. In one (“Towards quantitative cell type-based mapping of the whole mouse brain”), Associate Professor Pavel Osten is principal investigator leading a team that includes Professor Partha Mitra and Assistant Professor Florin Albeanu. They will develop a largely automated method that will make it possible to count and physically locate the full set of 70 million neurons and 30 million helper cells, called glia, across the mouse brain. This will prepare the way for similar studies in the human brain. The grant totals $3.76 million over three years.

Comprehensive information not only about numbers and distribution of brain cells but also about the diversity of cell-types—in the mouse brain and the human brain—has long eluded scientists, mostly because of technical barriers. If they are successful, Osten, Mitra and Albeanu will greatly advance efforts to understand the brain as a dynamic organ. To date it has been possible to study the brain one section or circuit or grouping of neurons at a time.

A second NIH BRAIN grant (“An optogenetic toolkit for the interrogation and control of single cells”) has been awarded to a team led by Professor and HHMI Investigator Gregory Hannon. As principal investigator, Hannon’s objective is to develop a set of optogenetic-based tools that will give researchers unprecedented ability to target specific cell types in the brain and modify their function. The grant is for $1.38 million over three years.

A third NIH BRAIN grant (“Combining genetics, genomics and anatomy to classify cell types across mammals”) also involves Professor Mitra, who will contribute to a team effort led by principal investigator Dr. Sacha Nelson of Brandeis University. This research focuses on better understanding how neuronal cell types have evolved across mammals. This in turn will advance efforts to better delineate neuronal cell types in the human brain. As a first step, corresponding neuronal cell types will be directly compared in two closely related mammalian species, mice and rats.

Earlier this year, another participant in the BRAIN Initiative, the National Science Foundation, issued grant awards for early stages of the project. Two such grants were awarded to Drs. Mitra and Albeanu.

“The human brain is the most complicated biological structure in the known universe. We’ve only just scratched the surface in understanding how it works—or, unfortunately, doesn’t quite work when disorders and disease occur,” said NIH Director Francis S. Collins, M.D., Ph.D. “There’s a big gap between what we want to do in brain research and the technologies available to make exploration possible. These initial awards are part of a 12-year scientific plan focused on developing the tools and technologies needed to make the next leap in understanding the brain. This is just the beginning of an ambitious journey and we’re excited about the possibilities.”

For more on the BRAIN Initiative, go to http://www.nih.gov/science/brain/