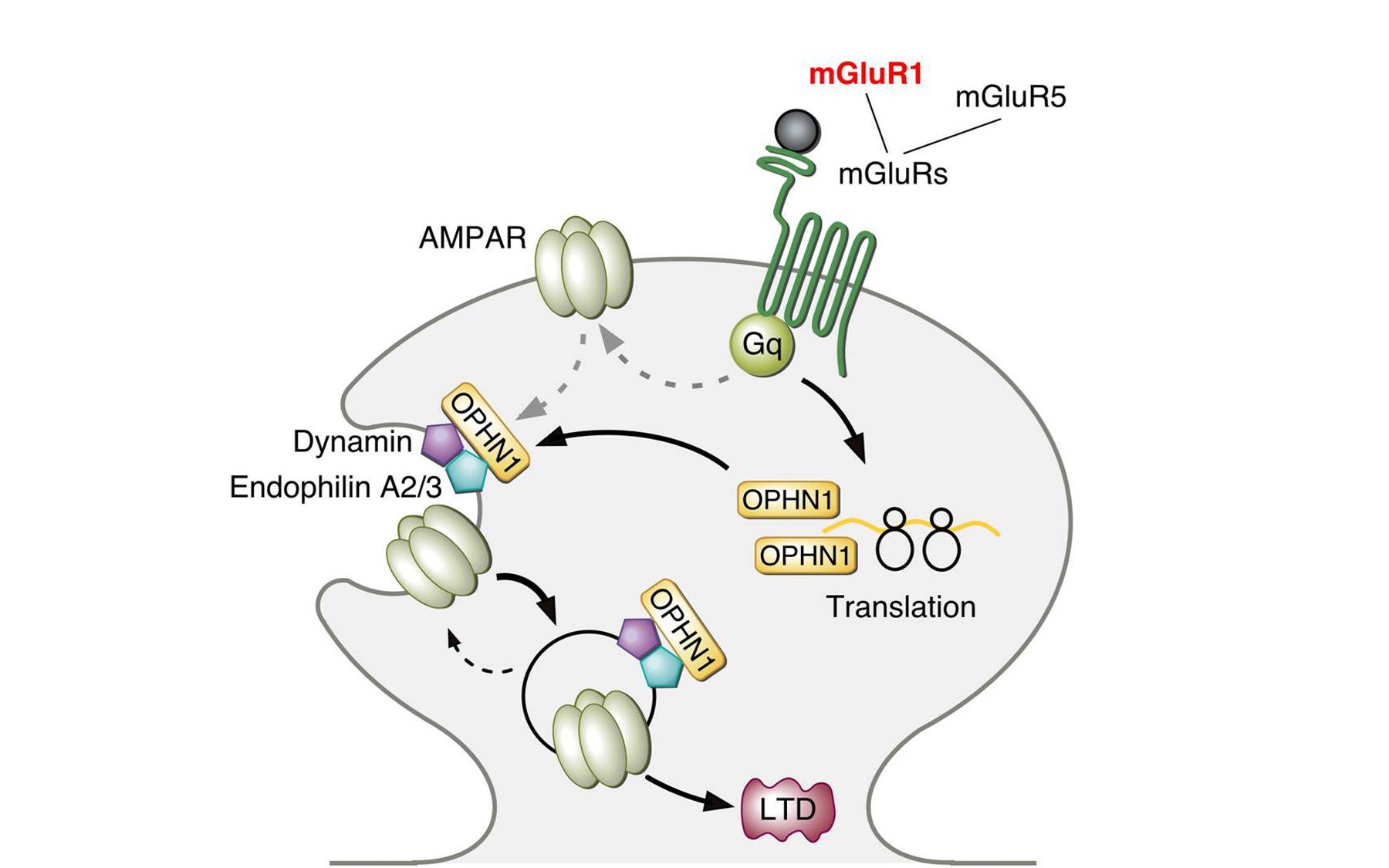 Cold Spring Harbor, NY — Scientists at Cold Spring Harbor Laboratory (CSHL) have solved part of a puzzle concerning the relationship between changes in the strength of synapses—the tiny gaps across which nerve cells in the brain communicate—and dysfunctions in neural circuits that have been linked with drug addiction, mental retardation and other cognitive disorders.

A team led by CSHL Professor Linda Van Aelst has pieced together essential steps in a signaling cascade within excitatory nerve cells that explains a key phenomenon called long-term depression, or LTD. The “depression” in question has nothing to do with the human illness with that name. Rather, it refers to a tamping-down of the strength of individual synapses—what scientists call synaptic plasticity.

The mechanism behind LTD is called endocytosis. It involves a retraction of receptors where neurotransmitters can “dock.” Van Aelst and colleagues have demonstrated how LTD works following activation of a class of receptors called group I metabotrobic glutamate receptors, or mGluRs.

It was known that long-term depression mediated by mGluRs depended in part on the rapid synthesis of specific proteins. Yet the identity of these proteins had largely remained a mystery. The CSHL scientists have now shown that locally rapid production of a protein called oligophrenin 1 (OPHN1) follows activation of group I mGluRs. OPHN1 in turn was shown to mediate LTD in hippocampal nerve cells, by interacting with yet another protein called EndophilinA2/3.

The result of this cascade of intracellular signals was dramatic: persistent removal of AMPA-type receptors at the excitatory synapse, and the onset of LTD. When rapid production of OPHN1 was blocked, mGluR-dependent LTD did not occur. These findings appear online today ahead of print in the journal Neuron.

Van Aelst explained the significance of the finding. “OPHN1 has two important functions that we know about. One is early in development, after synapses have appeared in the emerging nervous system. In this phase, OPHN1 in concert with other factors stabilizes receptors at synapses, and thus is essential in maintaining the structure of these essential features of neural circuitry.

“Our new findings show another vital role for OPHN1, later in development and into maturity. We assume that in response to behavioral stimuli—we aren’t yet sure what kind—mGluRs are activated, setting off the series of steps that we identified: rapid upregulation of OPHN1, which binds to EndophilinA2/3, which in turn mediates the long-term removal of AMPA receptors.”

OPHN1 is known to be associated with X-linked mental retardation and with other cognitive and behavioral deficits. The team hypothesizes that OPHN1-related changes in plasticity such as those described in their new work may be causally related to such pathology. They are investigating this possibility in their current work.

This work was supported by grants from the National Institue of Mental Health and NAAR.

“Rapid Synthesis of the X-linked Mental Retardation Protein OPHN1 Mediates mGluR-Dependent LTD through Interaction with the Endocytic Machinery” appears online ahead of print October 19 in Neuron. The authors are: Nael Nadif Kasri, Akiko Nakano-Kobayashi and Linda Van Aelst. The paper can be accessed online at: http://www.cell.com/neuron

CSHL scientists received grants to broaden our knowledge of the human brain and how to treat neurological disorders.   Read more »

Mice with too many chandelier cells lack depth perception

Chandelier cells should decrease in number as animals develop. Mice with too many cells lack depth perception.   Read more »