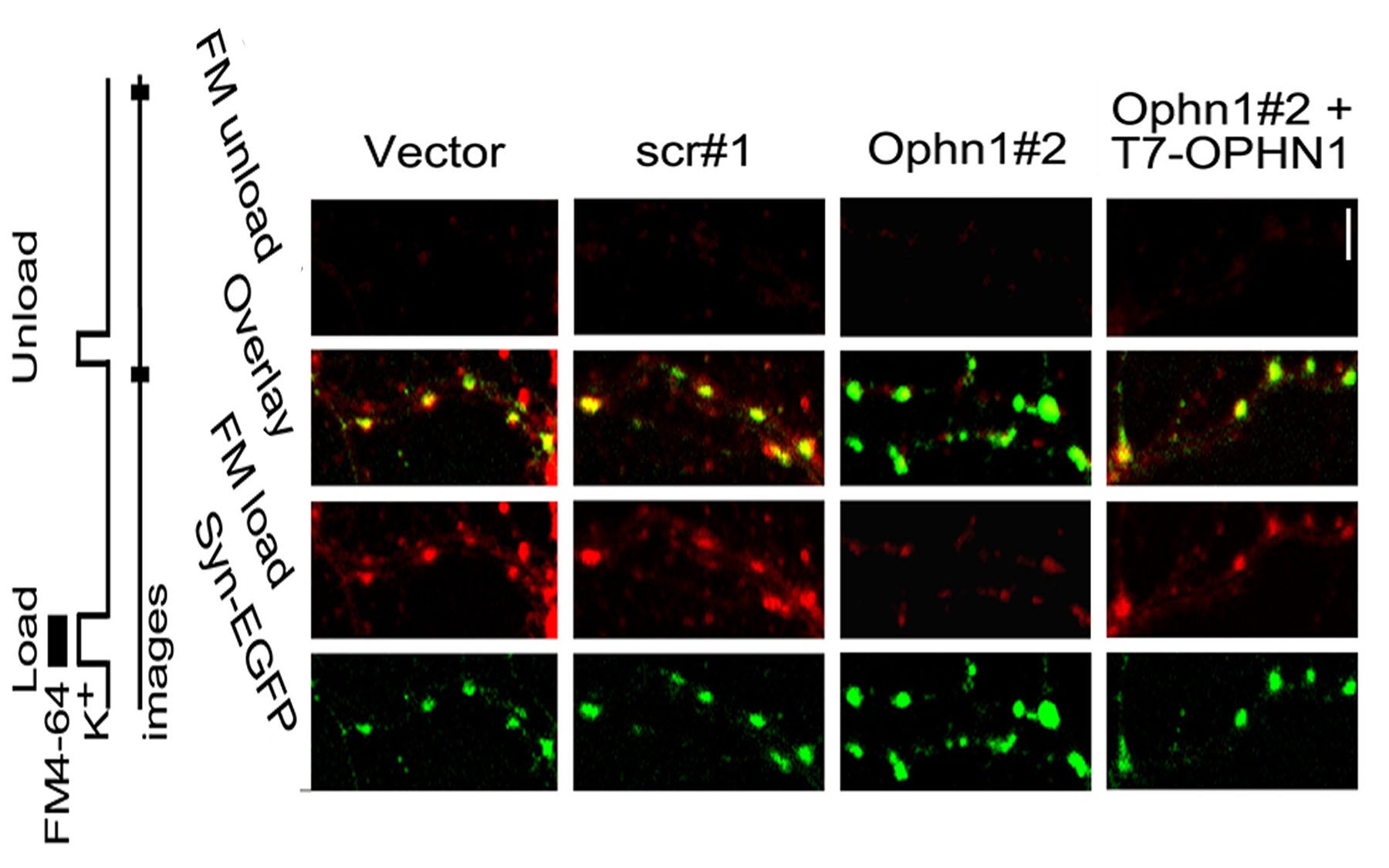 Cold Spring Harbor, NY — Brain cells, or neurons, transmit electrical signals efficiently only when they recycle tiny cellular sacs that store signaling chemicals called neurotransmitters. When a neuron is stimulated, the sacs are expelled into the synapse—the tiny junction between nerve cells—where they release the chemicals, which neighboring cells in turn soak up.

Researchers at Cold Spring Harbor Laboratory (CSHL) report that the recycling of these sacs, or vesicles, is controlled by a protein whose lack of function has been known to cause a brain developmental disorder called X-linked mental retardation (XLMR).

This protein, called oligophrenin-1 (OPHN1), is defective in patients with XLMR because of mutations in the OPHN1 gene, one of more than 280 genes that have been associated, to date, with mental retardation. “But how this protein’s lack of function affects brain circuits and development was a mystery because we didn’t know what its role is in healthy brains,” explains CSHL Professor Linda Van Aelst, Ph.D., who led the research team that reported their findings online ahead of print on May 28th in the journal Current Biology.

OPHN1 is important for both receiving and transmitting messages

Van Aelst and colleagues have made extensive investigations of OPHN1 on both sides of the synapse—the pre-synaptic side, from which neurotransmitters are released, and the post-synaptic side, where they are received. In a paper published June 1 in the journal Genes & Development, Van Aelst’s team reported that OPHN1 activity at post-synaptic terminals—the ends of neurons where they receive messages—is critical for strengthening the synapse.

When signal-receiving molecules called NMDA receptors are activated at the post-synaptic terminals, the team found that OPHN1 protein molecules are recruited into the region. There, the team discovered, they stabilize and maintain cell structures called dendritic spines that jut out from neuronal cell bodies, acting like tiny receivers of incoming messages from other neurons. The team showed how defective OPHN1 signaling results in a chain of events culminating in misshapen dendritic spines and loss of synaptic strength and plasticity.

In their Current Biology paper, Van Aelst’s team focuses on the other side of the synapse—the pre-synaptic side of the gap. “We’ve found that OPHN1 also helps neurons to transmit messages by controlling the recycling of synaptic vesicles in pre-synaptic terminals,” explains Van Aelst. “It suggests that the symptoms of XLMR could stem not only from having both immature and deformed dendritic spines but from inefficient vesicle retrieval and recycling in brain cells as well.”

Problems with vesicle recycling have been observed previously in other disorders, including schizophrenia. The new work thus not only helps build a more complete picture of the pathology that underlies XLMR but also adds to what scientists know about the pathologies of other neural disorders.

For the electrical signals that pass between the brain’s neurons to be strong and long-lasting, each neuron must be ready to “fire” its signals repeatedly. Such steady activity is possible only if the release of neurotransmitters at the synapse is sustained over time.

However, each neuron has only a limited number of neurotransmitter-carrying vesicles—about 200 or so—and makes up for this limitation by recycling used vesicles. After vesicles, which typically cluster near the edge of the cell that faces the synapse (the pre-synaptic terminal) are expelled into the synapse and their chemical cargo released into the void, the cell sucks empty vesicles back in and refills them for the next round of release.

Van Aelst’s group found that the retrieval of expelled vesicles by neurons is drastically reduced when they fail to produce OPHN1 protein. The team made this discovery when they “knocked down” the levels of OPHN1 protein in pre-synaptic terminals of neurons obtained from the rat hippocampus (an important region for learning and memory) using RNA interference, a technique in which short bits of RNA are used to silence genes, in this case, OPHN1. Without OPHN1 protein, neurons fail to fire repeatedly and maintain synaptic efficiency.

To understand how OPHN1 protein promotes recycling, the CSHL conducted an experiment that showed that OPHN1 binds to another cellular protein called endophilin-1, which is known to create inward curves in cell-surface membranes so that incoming molecules such as synaptic vesicles can fuse with the membrane and slip back into the cell—a process known as endocytosis.

While the mechanics of how the interaction between OPHN1 and endophilin-1 accomplishes recycling is not fully clear, the team believes that recycling depends on OPHN1’s ability to control membrane curvature and rearrange the cell’s internal scaffolding, or cytoskeleton. Such OPHN1-directed changes to the cell’s internal frame, they postulate, might lead to the forming of the endophilin-1-controlled curved pits that help vesicles to re-enter the cell.

“We’re starting to understand what happens to communication in the brain when the OPHN1 gene is mutated,” says Van Aelst. “It’s the necessary step that comes between finding the disease-causing mutation and figuring out a therapeutic solution.”

CSHL Assistant Professor Lucas Cheadle has been named a Next Generation Leader by the Allen Institute for Brain Science.   Read more »