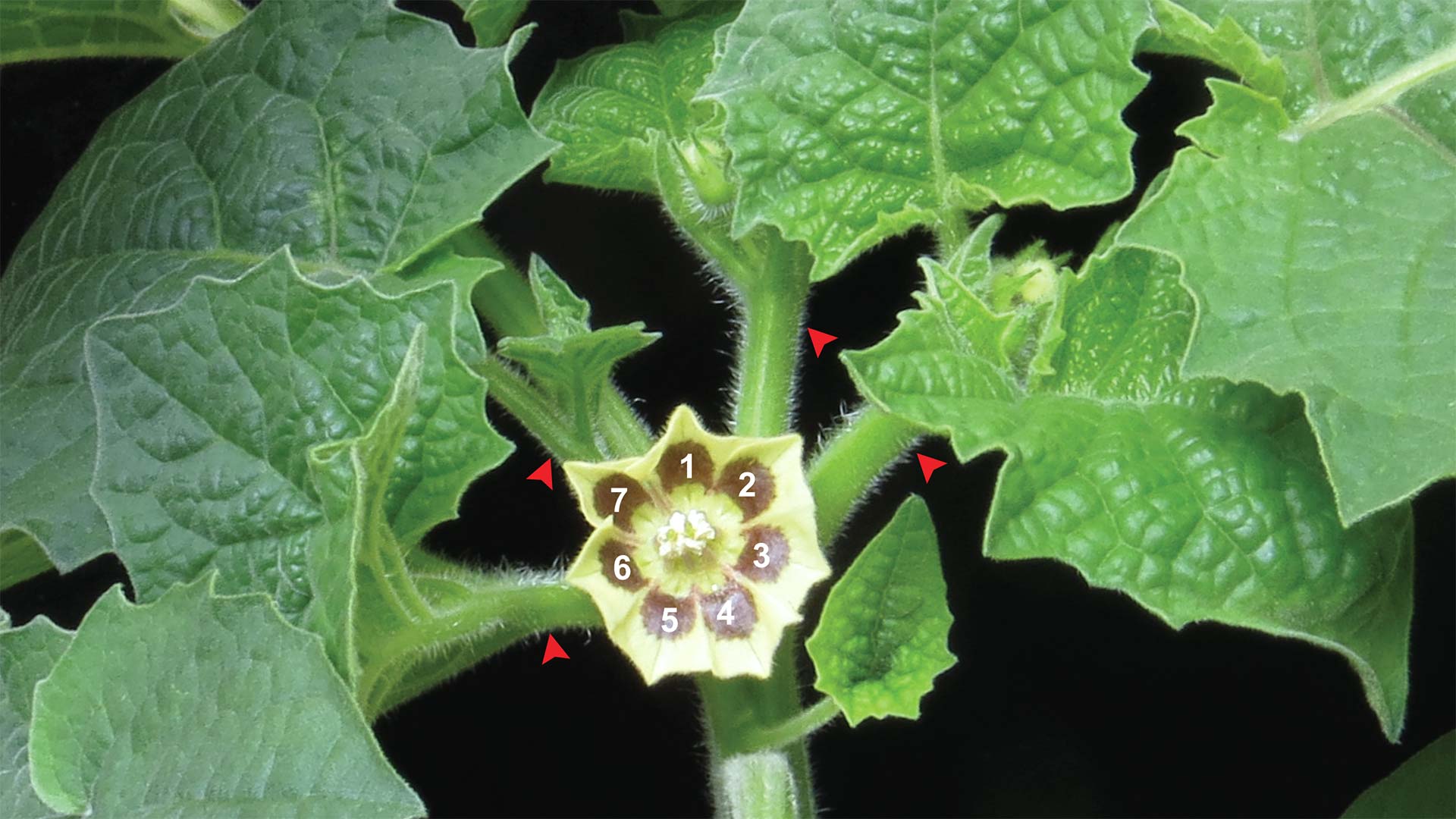 In tomatoes, a developmental gene called WOX9 produces flowers. However, this gene’s role was unknown in groundcherries, a close relative to the tomato plant, with sweet and sour fruit. Using the genome-editing tool CRISPR to change when, where, or how much WOX9 is made, flowering can also be increased in the groundcherry, as pictured here. The red arrows point to extra flower branches when compared to the original plant. Image: Hendelman/Lippman lab
email envelop icontwitter icon share buttonfacebook icon share buttonlinkedin icon share button

Researchers at CSHL used CRISPR, a genome-editing tool, to figure out the hidden roles of a developmental gene called WOX9. It usually induces flower branching in tomatoes and influences embryo growth in a plant related to broccoli. By tweaking the DNA in the gene’s nearby promoter region, the researchers found WOX9 could induce flower branching in other species. These types of genetic manipulations provide new opportunities to improve crop traits while eliminating unwanted side effects.

Over evolutionary time scales, a single gene may acquire different roles in diverging species. However, revealing the multiple hidden roles of a gene was not possible before genome editing came along. Cold Spring Harbor Laboratory (CSHL) Professor and HHMI Investigator Zach Lippman and CSHL postdoctoral fellow Anat Hendelman collaborated with Idan Efroni, HHMI International Investigator at Hebrew University Faculty of Agriculture in Israel, to uncover this mystery. They dissected the activity of a developmental gene, WOX9, in different plants and at different moments in development. Using genome editing, they found that without changing the protein produced by the gene, they could change a plant’s traits by changing the gene’s regulation.

“Genes” are the DNA that code for proteins, but other nearby stretches of DNA regulate the activity of genes, instructing them where, when, and to what degree they should be active. With the genome-editing tool CRISPR, scientists can introduce precise mutations into DNA, including these regulatory regions. Though scientists would like to use CRISPR to fine-tune plant traits, the technique sometimes yields surprising results; some genes turn out to have functions that were previously unknown.

WOX9 is one of several “homeobox” genes that help plants and animals set borders in developing structures. While the gene plays a role in early development in arabidopsis, a weedy relative of broccoli, it influences later development—reproduction and flowering—in tomatoes. Lippman and Hendelman used CRISPR to create a series of mutations in the regulatory DNA surrounding WOX9 to reveal additional functions in tomato, groundcherry, and arabidopsis plants. Given the right regulatory sequence, the gene could induce more flowers to form in all three species. WOX9 is thus a candidate to increase yields in these and other crop plants just by changing its regulation. This discovery suggests that other genes may also have hidden multiple roles. Lippman says:

“We know about a whole bunch of genes that you might want to target with genome editing to improve crops, but there’s a whole other set of genes for which they might have really useful functions that could also help improve crops. And so by using this approach, you can expose those roles and then you can predictably fine-tune the activity of that gene for that specific role to get the desired trait modification.”

Lippman’s team published their findings in the journal Cell. Their work will make it easier to improve crop traits more predictably.

Researchers at CSHL used CRISPR, a genome-editing tool, to figure out the hidden roles of a developmental gene called WOX9. It usually induces flower branching in tomatoes and influences embryo growth in a plant related to broccoli. By tweaking the DNA in the gene’s nearby promoter region, the researchers found WOX9 could induce flower branching in other species. These types of genetic manipulations provide new opportunities to improve crop traits while eliminating unwanted side effects.