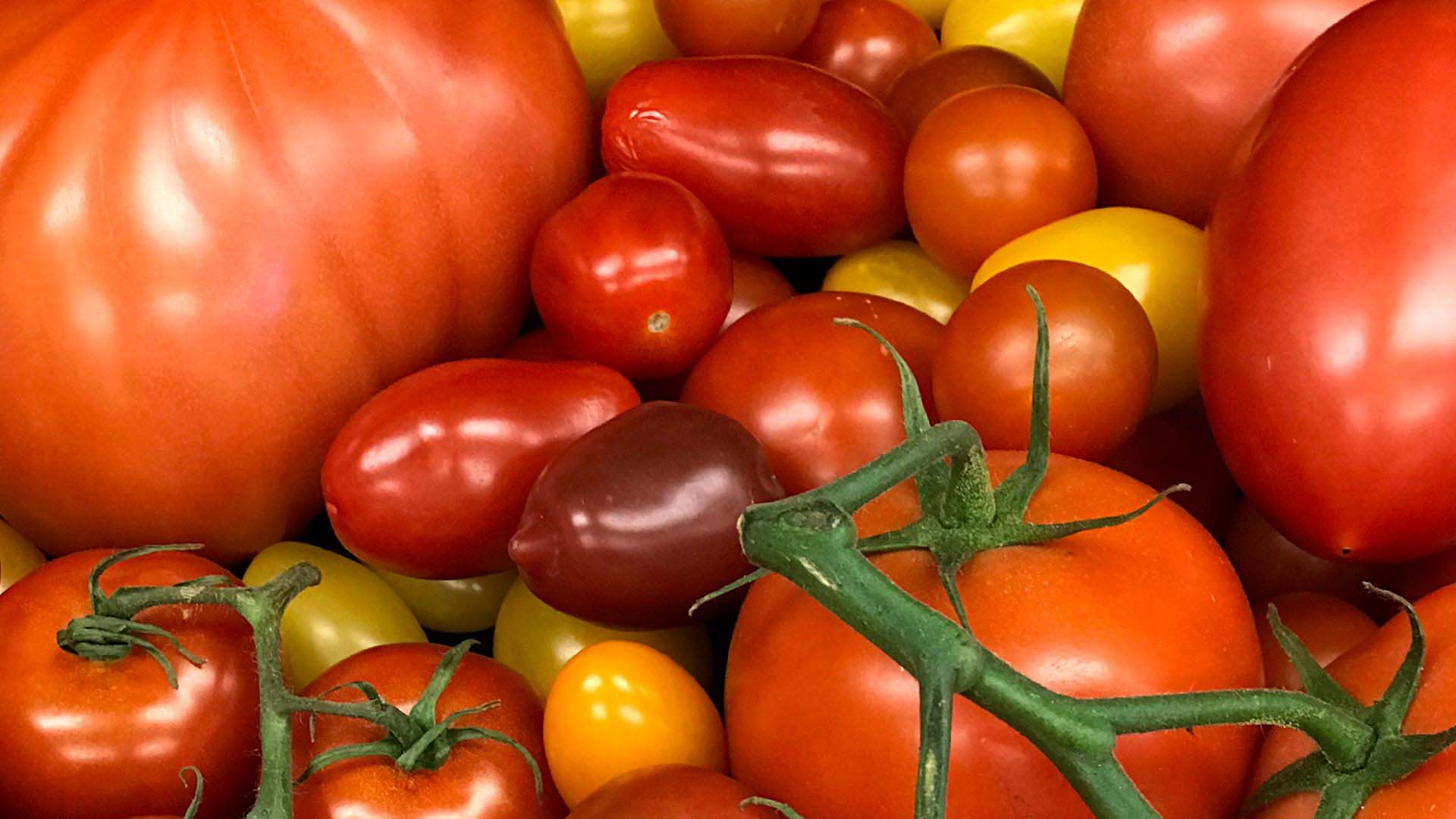 This expansive analysis of genetic variation among tomatoes is the most comprehensive study to date of structural genome variation for a major crop. Researchers uncovered 230,000 previously hidden large-scale differences in DNA between varieties, which change flavors, alter yield, and shape other important traits.

An expansive new analysis of genetic variation among tomatoes has uncovered 230,000 previously hidden large-scale differences in DNA between varieties. As tomato plants evolved, segments of DNA were deleted, duplicated, or rearranged. These genomic “structural variations” underpin the vast diversity among tomatoes, changing flavors, altering yield, and shaping other important traits.

The study, a collaborative effort led by Cold Spring Harbor Laboratory Professor and Howard Hughes Medical Institute investigator Zachary Lippman and Johns Hopkins University (JHU) Professor Michael Schatz, is the most comprehensive analysis to date of structural genome variation for a major crop. Breeders and scientists will be able to apply the information to breed or engineer new, more desirable plants with greater efficiency.

Large-scale differences between genomes, known collectively as structural variants, are likely responsible for a wide range of plant features that breeders care about, but these elements have been notoriously difficult to study, leaving much of the genetic origins of tomato diversity unexplained, says Xingang Wang, a postdoctoral researcher in Lippman’s lab. New DNA sequencing technology along with powerful new genome editing technology has recently made structural variants easier to detect and study how they affect crop traits. Lippman’s team, in collaboration with scientists at Johns Hopkins University, the University of Georgia, the Boyce Thompson Institute, and others, seized the opportunity to investigate. Lippman notes,

“There was a whole massive amount of natural genetic variation that we were blind to. And the only way to get at it was through this new technology. And there were already quite a few examples in the literature of how some of that hidden—what we call structural variation—was important. And it was probably being grossly underestimated in terms of its importance. So we really just needed to walk through that door. And the only way to do it was to do it at scale with a hundred different genomes.”

Together, the group sequenced and compared the genomes of 100 different varieties of tomato, including robust varieties suitable for industrial agriculture, succulent heirlooms, and wild relatives of cultivated tomatoes. Within those genomes, the team identified more than 230,000 structural variants.

To gain a better understanding of structural variants’ role in diversity, the team showed that thousands of genes were changed by the structural variations. Then they used CRISPR—the genome editing tool that can make targeted changes in DNA—to show that duplication of a particular gene causes a plant’s tomatoes to increase in size by about 30 percent. According to Schatz:

“Previous studies had identified this one gene called KLUH as being relevant. It makes the plant smaller. So it’s the HULK, y’know superhero, spelled backwards. Previous studies had sort of thought they had identified a single nucleotide variant. But we really came to appreciate, it was not a single nucleotide variant—it was one of these structural variants that had never been detected before. And what it turns out is that there was a so-called copy number variant, where if you have extra copies of this KLUH gene, it tends to make all of the cells in the plants bigger, makes the fruits bigger. So we think that this is going to have an enormous impact in agricultural science, where we sort of did this in tomato, but the experimental design could be executed in basically every crop species of interest.”

Investigating another variant, they tracked down a gene that contributes to a smoky flavor in some tomatoes. Wang says:

And in a third set of experiments, the researchers used CRISPR to tease out a complex interaction involving four structural variants that can mitigate a potential trade-off between a feature that simplifies tomato harvesting and another that reduces productivity.

This expansive analysis of genetic variation among tomatoes is the most comprehensive study to date of structural genome variation for a major crop. Researchers uncovered 230,000 previously hidden large-scale differences in DNA between varieties, which change flavors, alter yield, and shape other important traits.

Unexpected interactions between mutations can be a thorn in the side for plant breeders. Scientists unveil what drove one infamous “cryptic” mutation.   Read more »