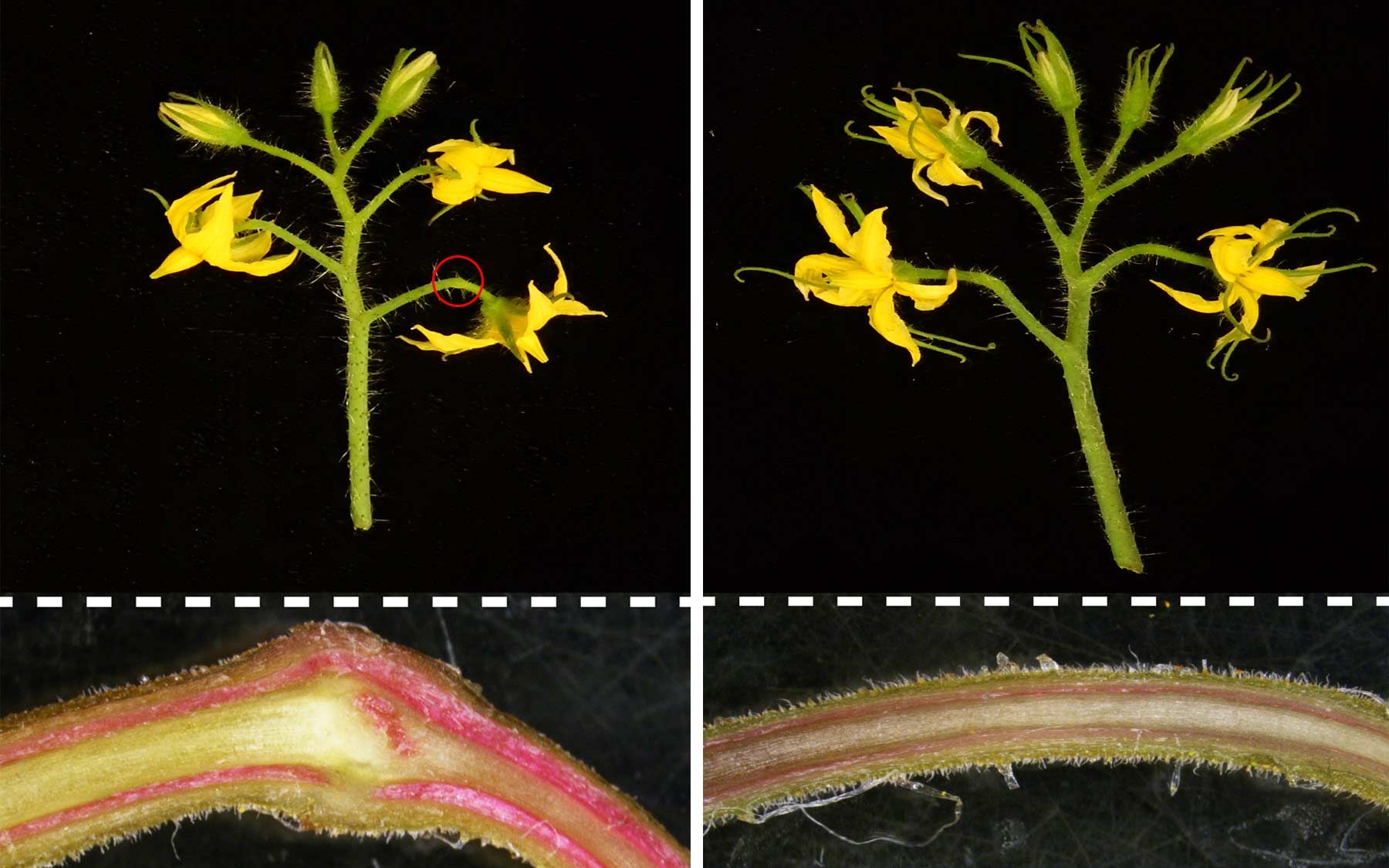 Without the nubby joints that are normally present on the stems of tomato plants, the fruit is much easier to harvest. However, researchers have discovered how a cryptic mutation can get in the way of this otherwise desirable trait.
email envelop icontwitter icon share buttonfacebook icon share buttonlinkedin icon share button

Even in this “age of the genome,” much about genes remains shrouded in mystery. This is especially true for “cryptic mutations”—mutated genes that are hidden, and have unexpected effects on traits that are only revealed when combined with other mutations. Learning from one infamous cryptic mutation in particular, researchers from CSHL share important lessons for breeding or gene editing in crops.

This story starts with the Campbell Soup Company and a field of tomatoes in the mid 20th century. One particular tomato plant had an unexpected beneficial trait: the fruits separated from the vine right where the green cap and stem touch the rest of the fruit. It turned out that this spontaneous natural mutant was ideal for large-scale production.

Other tomato varieties would break away at a joint-like nub in their fruit stems, leaving the pointed green caps on the fruits. With stems still present, these capped tomatoes would get easily bruised in the machine-picking process or end up puncturing one another in transit. However, the lucky Campbell Soup mutant didn’t have these problems. It was jointless, and perfect for a growing, automated industry. Unsurprisingly, breeders called the gene mutation that drives this beneficial trait jointless-2 (j2).

During the 1960s, tomato breeders worked furiously to introduce j2 into many varieties. However, it quickly became apparent that j2’s benefit of safe and easy harvesting came at a big price. In nearly all occurrences, jointless tomato plants would branch and flower in an out-of-control manner, causing an imbalance in growth that led to reduced fruit production and yield.

“Even that first plant from Campbell company was described as having excessive branching,” explained Howard Hughes Medical Institute Investigator and CSHL professor Zach Lippman. This unpredictability in a crop was far from ideal.

In 2017, Lippman and postdoctoral researcher Sebastian Soyk finally solved the mystery underlying this unpredictable behavior, which had troubled breeders for more than five decades. The researchers revealed that an ancient gene mutation—an artifact of crop domestication over 4000 years old—had an unexpected interaction with j2. The result was a powerful example of what scientists call “cryptic genetic variation.”

“On its own, the single mutation has no obvious effect on the health or the fitness or the vigor of the plant,” says Lippman. “But when another mutation happens along with it and there is a negative interaction, that’s the cryptic mutation revealing itself.”

Today, sequencing technologies allow us to see these mutations. Moreover, with the aid of gene editing tools like CRISPR, scientists can fine-tune the mutations underlying the negative interactions so that they no longer hinder agricultural production.

Learn more about that 2017 research.

But in the 1960s the gene-editing capabilities of today’s CRISPR technologies would have sounded like science fiction.

So how did breeders back then avoid unpredictable troubles involving the j2 mutation? According to Lippman, industry breeders simply sifted through tomato varieties until they found one that played nice with j2. Decades later, a closer examination of the genomes of the plants these breeders developed reveals that the reason they didn’t clash with j2 was because they often lacked the ancient domestication mutation entirely.

That’s what made a second way breeders overcame the undesirable cryptic mutation so interesting.

“We found that some breeders in Florida were able to select additional cryptic variants that neutralize this negative interaction,” he says.

The researchers’ latest work, published in Nature Plants, explains that the additional cryptic variants the Florida breeders stumbled upon are called structural variants—rearrangements in the sequence of DNA that lead to distinct changes within the chromosome. In this case, the variant was a duplication of the ancient mutation interacting with j2.

In other words, instead of avoiding the ancient mutation, the Florida farmers kept breeding their tomatoes until chance mutations left them with a duplicated copy of the ancient, cryptic mutation. Amazingly, in a fortunate genetic twist, this ended up restoring function.

The ancient mutation normally ‘breaks’ the gene, Lippman explains. “It reduces the functional activity of that gene by 30 percent. But if I suddenly have two copies of that mutated gene, we’re back to nearly full functional activity.”

In this way, double the ancient mutation equated to nearly the same result as having no mutation at all!

“This [duplication event] was naturally occurring, so basically, nature provided the solution to its own problem,” the scientist adds.

And that is really the lesson. Modern scientists with powerful gene editing tools, such as CRISPR, can still learn from nature’s unexpected solutions. Lippman also explains that this work also highlights how much about genomes remains hidden even from modern sequencing tools. Without the extensive history of the Campbell Soup Company tomato that showed scientists where to look, even that cryptic mutation may have remained hidden.

“The example we presented is very a black and white case,” says Lippman. “However, I’m pretty confident saying that there are going to be many examples of cryptic variation that are much more nuanced and subtle in their effects.”

And that, he adds, makes this a cautionary tale. “If you have a particular gene that you want to use to improve a trait, for example, by gene editing, it may very well be that the outcome is not going to be what you expected.”

The challenge, then, is determining how to make cryptic variation more predictable. Dissecting examples like the case of the j2 mutation, provides crucial clues for this future work.

“Even today, plant breeding is largely unpredictable,” Soyk notes. “Our findings can now be used by breeders to develop better strategies for breeding to improve harvesting using the jointless mutation,” but what about other crops?

“So that’s what we’re moving toward with our research,” says Lippman. “We want to try to figure out, amongst the sea of mutations that exist, which ones have the most likely chance of being cryptic in nature, and will reveal themselves when you use gene editing.”

The researchers hope that if they can better predict when cryptic mutations may arise, they can avoid unforeseen problems in both breeding and genome editing.