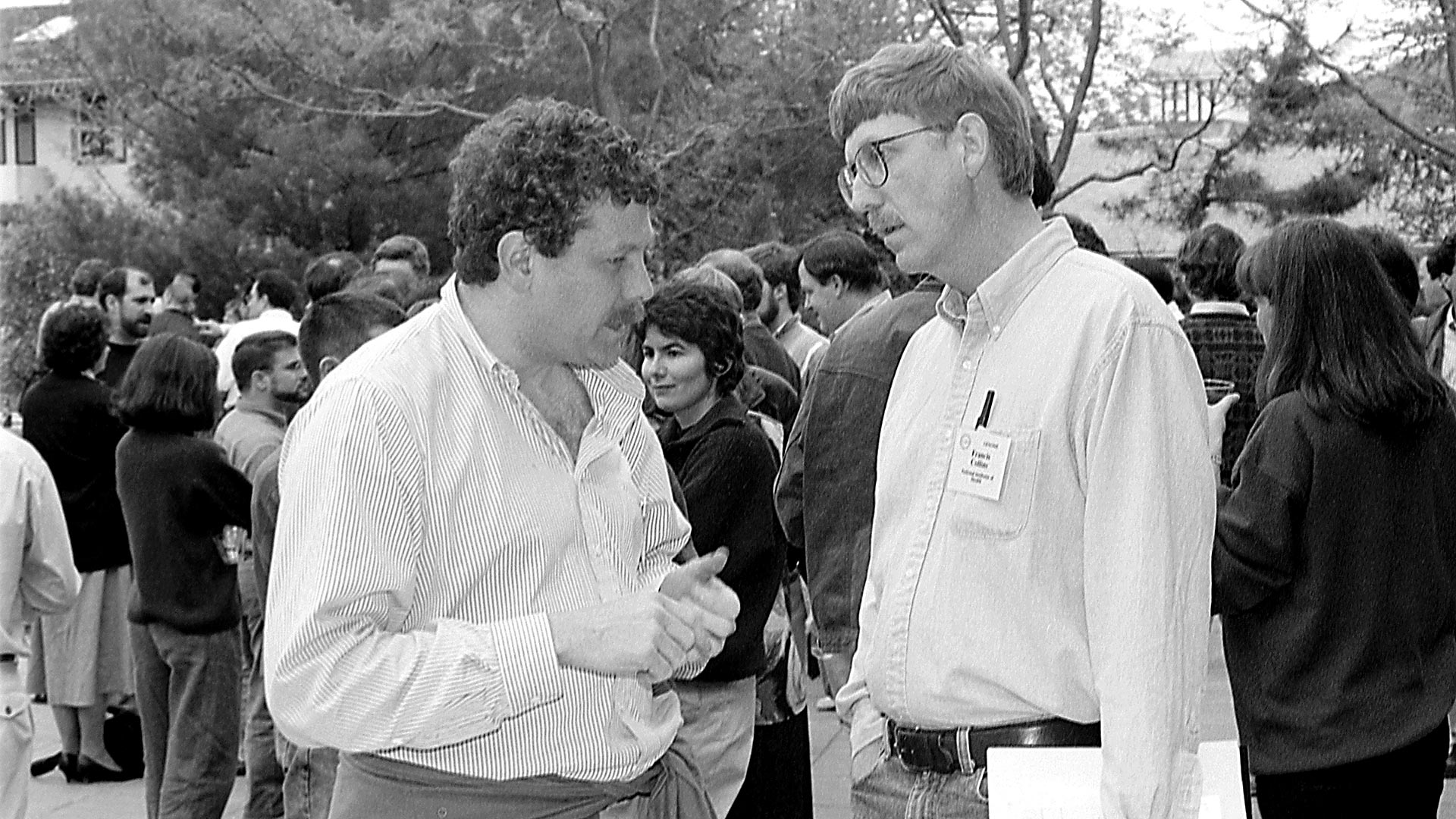 The international Human Genome Project (HGP) required regular gatherings to keep hundreds of researchers on track. Cold Spring Harbor Laboratory (CSHL) hosted many of these meetings. In this image: Eric Lander (president and founding director of the Broad Institute of MIT and Harvard, now the presidential science advisor and director of the US Office of Science and Technology Policy) and Francis Collins (the director of the National Institutes of Health), chat amidst a crowd of geneticists at a CSHL HGP meeting in 1988.
email envelop icontwitter icon share buttonfacebook icon share buttonlinkedin icon share button

The Human Genome Project (HGP) set out to sequence the three billion letters of the human genome. Cold Spring Harbor Laboratory (CSHL) regularly hosted meetings to gather international collaborators and discuss their progress. With the HGP completed in 2003, CSHL researchers are now lending a hand to understand how elements of the genome function for the ENCyclopedia of DNA Elements (ENCODE). Today, CSHL continues to be a center for DNA research and education through our Meetings & Courses Program, CSHL Press, and the DNA Learning Center. With the HGP and ENCODE, science is a few major steps closer to understanding what makes us human.

The human genome has been referred to as the “book of life,” containing all the necessary instructions to build a human being. After years of bouncing around the idea of spelling out this “book,” a group of biologists met at the Cold Spring Harbor Laboratory (CSHL) Banbury Center in 1989 to devise a concrete plan for sequencing the three billion letters. The endeavor was dubbed the Human Genome Project (HGP). The project required an international consortium of 20 institutions, including CSHL, willing to tackle this expensive and repetitive work. The Laboratory hosted regular meetings to gather the researchers and discuss their progress. Now, CSHL researchers are lending a hand in translating and annotating the genome as part of the ENCyclopedia of DNA Elements (ENCODE). 30 years after the start of the HGP, CSHL continues to educate the next generation of young scientists through classes, courses, and summer camps for the youngest ones.

At first, the HGP was met with controversy in the science community. Sequencing was tedious and expensive, and no one had ever attempted an international biology task of this magnitude before. But despite the challenges ahead, hundreds of scientists, including many at CSHL, joined the project after its launch in 1990.

After 13 years, the HGP completed the human genome sequence. By then, genome sequencing technology had been made faster, more routine, and less expensive. The National Human Genome Research Institute (NHGRI) shifted its attention from spelling to cataloging and understanding patterns in the DNA. It invested in the next phase: ENCODE. The ENCyclopedia works to translate genomes, creating comprehensive instruction manuals for how humans, mice, worms, and flies work.

In July 2020, approximately 500 researchers worldwide, including several scientists at CSHL, celebrated the completion of Phase 3 of ENCODE. They had identified and classified pieces of the genome that code person-to-person variation. This accomplishment helps scientists understand how some diseases affect certain individuals and demographics more than others.

Today, CSHL continues to be a center for DNA research and education. Sixty meetings and courses are offered every year to scientists in genetics, genomics, and related fields. CSHL Press publishes books, reviews, preprint servers, and peer-reviewed journals, including Genome Research. Established in 1988, the CSHL DNA Learning Center (DNALC) educates 30,000 pre-college students per year and hosts summer camps for middle- and high-school students. Eight licensed DNALC centers are expanding opportunities to communities around the world, including one opened in 2020 in Nigeria. During the COVID-19 pandemic, the DNALC adapted quickly to educate students remotely. Since 1995, students at the Center have been learning about PCR tests, which is the method used in some COVID-19 tests.

The HGP provided the basis for the modern field of genetics and genomics research. Many projects and educational programs at CSHL and other scientific institutions would not be possible without the human genome sequence. With the HGP and ENCODE, scientists are figuring out what makes each of us uniquely human.

The Human Genome Project (HGP) set out to sequence the three billion letters of the human genome. Cold Spring Harbor Laboratory (CSHL) regularly hosted meetings to gather international collaborators and discuss their progress. With the HGP completed in 2003, CSHL researchers are now lending a hand to understand how elements of the genome function for the ENCyclopedia of DNA Elements (ENCODE). Today, CSHL continues to be a center for DNA research and education through our Meetings & Courses Program, CSHL Press, and the DNA Learning Center. With the HGP and ENCODE, science is a few major steps closer to understanding what makes us human.

Genomes, justice, and the journey here

The Human Genome Project opened a new era of science

A look back at the start of the Human Genome Project and CSHL's James Watson's role in it.   Read more »