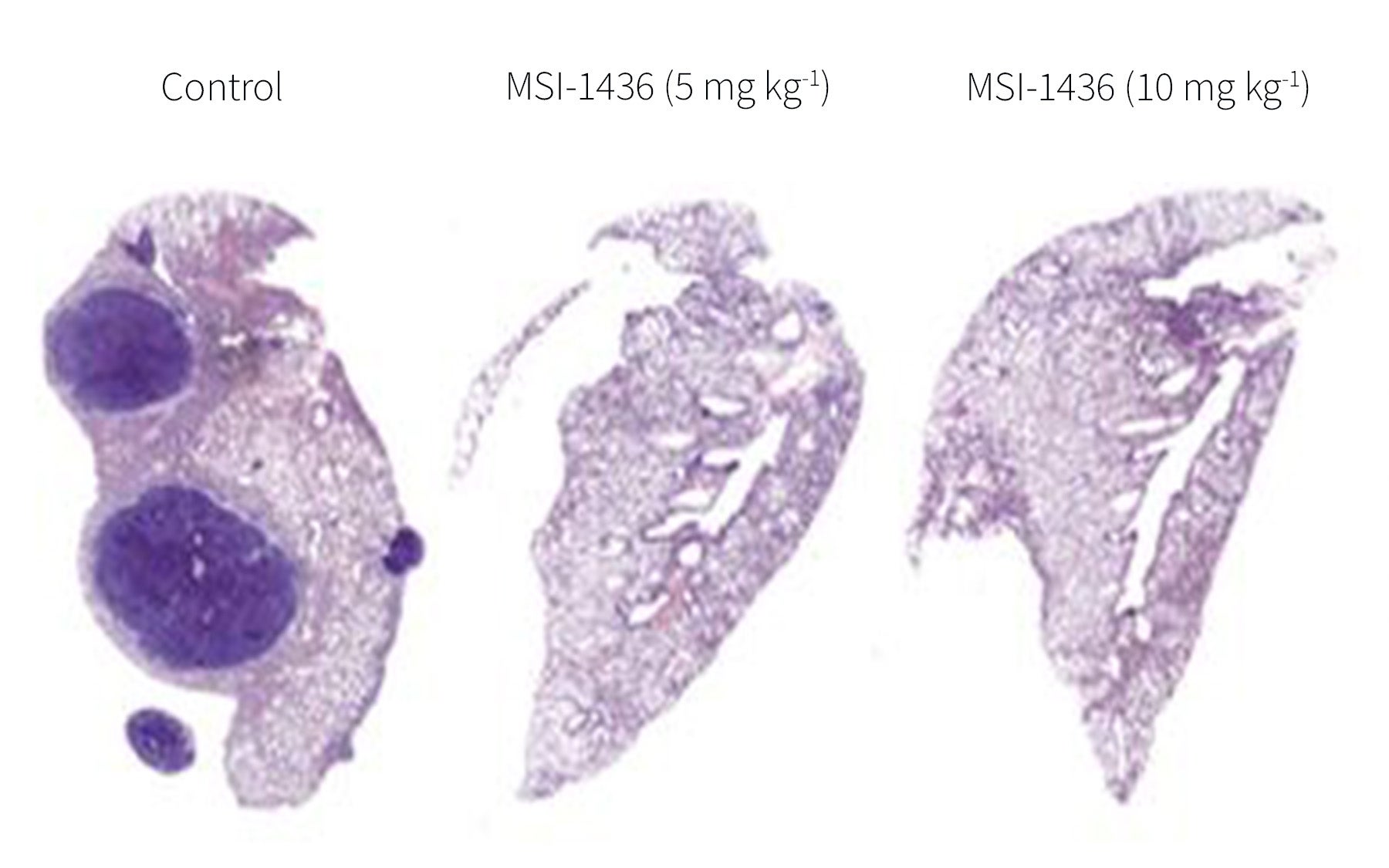 The candidate drug MSI-1436 (trodusquemine) inhibits HER2-positive tumor formation and metastasis through its inhibition of the enzyme PTP1B. Here, its effect on HER2-positive lung metastasis is shown: image at far left is untreated; dark areas are tumor metastases. The drug at two doses is shown to clear the metastatic lesions (dosage in center image is half that in right image).
email envelop icontwitter icon share buttonfacebook icon share buttonlinkedin icon share button

Cold Spring Harbor, NY — Scientists at Cold Spring Harbor Laboratory (CSHL) today report a discovery that they hope will lead to the development of a powerful new way of treating an aggressive form of breast cancer.

In a paper appearing online today in Nature Chemical Biology, a multi-institution team led by CSHL Professor Nicholas Tonks reports that it has found a means of inhibiting another protein, called PTP1B, whose expression is also upregulated in HER2-positive breast cancer. They show that PTP1B plays a critical role in the development of tumors in which HER2 signaling is aberrant. Therefore, PTP1B may be a therapeutic target through which to treat the disease.

When they treated mice modeling HER2-positive breast cancer with a drug candidate called MSI-1436 (also called trodusquemine), Tonks and colleagues not only inhibited signaling by PTP1B, but also signaling by HER2 proteins.

“The result was an extensive inhibition of tumor growth and prevention of metastasis to the lung in HER2-positive animal models of breast cancer,” notes Navasona Krishnan, Ph.D., a postdoctoral investigator in the Tonks lab who performed many of the experiments and is lead author on the paper reporting the results.

Dr. Tonks discovered PTP1B some 25 years ago. It is an enzyme—one in a “superfamily” of 105 called protein tyrosine phosphatases (PTPs)—that perform the essential biochemical task of removing phosphate groups from amino acids called tyrosines in other proteins.  Adding and removing phosphates is one of the principal means by which signals are sent among proteins.

PTP1B for many years has been a target of interest among drug developers. It is well known as a so-called negative regulator of insulin action—an antagonist of insulin signaling, as well as signaling by leptin, the hormone that helps regulate appetite. Drugs that can block or inhibit the action of PTP1B have enormous potential in controlling diabetes and obesity. Yet properties of the molecule—in particular involving the charge of its active site—have stymied potential developers of inhibitors.

The new paper by Tonks and collaborators importantly reveals an alternative binding site, called an allosteric site, that does not present the biochemical difficulties that the main, or “catalytic,” binding site does. It is this allosteric site that is the target of the candidate drug trodusquemine.

Later this year early-stage human trials will begin for the drug, a collaboration of CSHL and clinicians at the Monter Cancer Center of North Shore-Long Island Jewish Hospital. Dr. Tonks and CSHL have interests in a joint venture called DepYmed Inc., in partnership with Ohr Pharmaceutical (NasdaqCM: OHRP). The venture seeks to develop trodusquemine and related analogs.

Macrophages help the immune system defend the body from bacteria. They can be reprogrammed to destroy cancer cells.   Read more »

Cancer cells get rid of excess genetic baggage and double up on genetic protections to resist anti-tumor therapies.   Read more »

On the wrong side of cell division