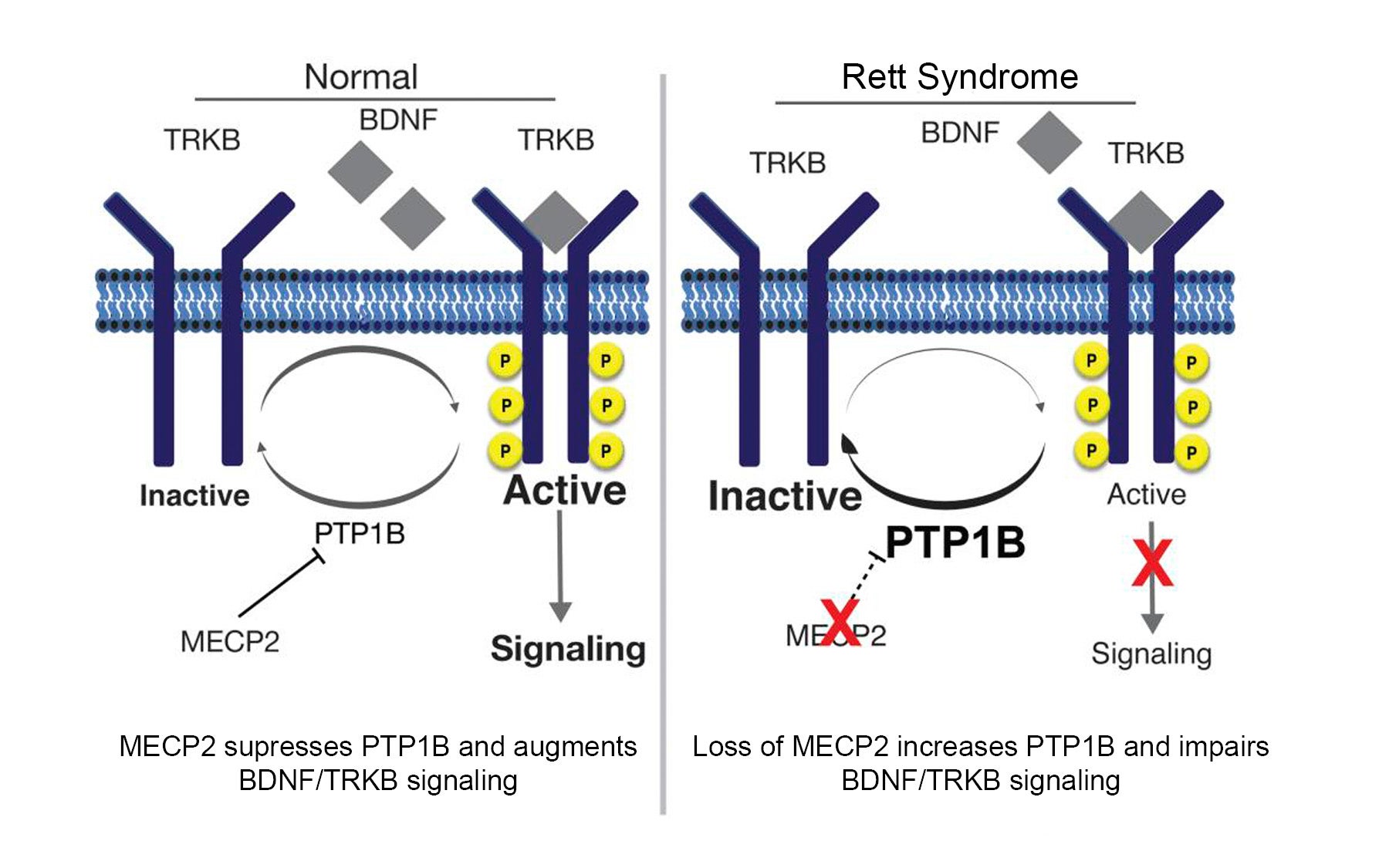 “At this time, there is no disease-modifying therapy for Rett syndrome,” Tonks noted, “and the focus of most current therapies is management of symptoms. Our approach represents a new strategy. In the research we’re reporting today, we have clear evidence in mice that we can actually reverse symptoms—supporting the concept that the disorder is not irreversible and may be amenable to treatment with small molecule drugs.”

Rett syndrome is a so-called X-linked disorder affecting the brain and nervous system. It is caused by mutations in a gene on the X chromosome called MECP2, which regulates the activity of other genes. Males have one copy of the X chromosome and one copy of the Y chromosome. Females have no Ys and two Xs, one of which is normally inactivated. Boys born with the MECP2 mutation have no other copy of the gene to fall back on, and often die in the first year or two of life. Girls with the mutation often survive because they have another copy of the gene. The first year or two of life is often normal, but by age two developmental pathologies strike, including cessation of brain development, impairment of gait, and loss of already acquired social skills. Nine in 10 Rett patients are girls, since most boys don’t emerge from infancy.

The encouraging research reported today is the product of 25 years of research by Professor Tonks. In 1988, Tonks, a biochemist, discovered an enzyme called PTP1B that would prove to be the first of a family of such proteins that now has 105 members; all are phosphatases, enzymes that remove phosphate groups from other proteins. These enzymes are central players in cascades of signals sent among and within cells to control fundamental processes such as growth and metabolism. In fact, PTP1B has been shown to function in suppressing signaling by the hormones insulin and leptin, which, respectively, are central in the pathology of diabetes and obesity. Consequently, drug candidates that inhibit PTP1B activity have been recognized for their potential as new approaches to treating these major diseases. Identifying and characterizing such drug candidates is one focus of the research in Professor Tonks’ group.

Realizing that metabolic regulation appears to be abnormal in Rett syndrome—“an underappreciated fact,” he says—Navasona Krishnan, Ph.D., a Research Associate who works with Professor Tonks, proposed using inhibitors of PTP1B to see if they might address any of the range of symptoms seen in the disease. He demonstrated early on that PTP1B levels were abnormally elevated in the model mice. This was an encouraging sign that inhibitors of PTP1B might have a beneficial effect in Rett syndrome mice. In young male mice lacking the Mecp2 gene (the analog of the MECP2 human gene implicated in Rett), one of Tonks’ PTP1B inhibitors extended median lifespan from 50 days to about 75 days. Another molecule worked even better, extending survival up to 90 days. (see box, left side, below)

In more mature female mice modeling the syndrome, PTP1B inhibitors improved symptoms in behavioral tests. In one, a paw-clasping behavior analogous to stereotactic hand movements seen in human patients was decreased following administration of a PTP1B inhibitor—the incidence among the treated mice was cut to 25% from nearly 100% prior to treatment. And on a walking test, mice modeling Rett placed on a rotating wheel showed partially restored function—they could remain on the wheel without falling off for significantly longer than untreated model mice.

Tonks, Krishnan and colleagues wanted to know if the glucose-regulating properties of the PTP1B inhibitors used in the experiments were alone responsible for the improvements observed. When the model mice were given two mainstay treatments for diabetes, metformin and rosiglitazone, there was no improvement. This suggested there was something more going on when PTP1B inhibitors were administered. But what?

Further experiments revealed a connection between PTP1B and the neural growth factor called BDNF, critical in early brain development (and in subsequent function of the brain). BDNF docks at cell receptors called TRKB (“track-B”). “Under normal conditions, PTP1B levels are low and signaling via TRKB is promoted,” Tonks explains. “In Rett syndrome, PTP1B levels are extremely high and signaling through TRKB is attenuated.”  This suggests a molecular-level explanation of why PTP1B inhibitors helped to improve Rett symptoms. “When you inhibit PTP1B, as our drug candidates do, you restore BDNF signaling through the TRKB receptor.”

Some current drug development efforts seek to activate the TRKB pathway in Rett syndrome, to restore BDNF responses. However, such approaches do not take into account the barrier that high levels of PTP1B represent. Tonks likens this to trying to drive a car by putting your foot down on the gas while the brakes are still on. If you hammer away at the gas, the car still won’t move forward very well. “Since PTP1B acts as the ‘brake’ in the Rett syndrome model,” he says, “our approach of inhibiting PTP1B shows what happens when you simply take your foot off the brake!”

Tonks’ lab has now entered into collaborations with other labs expert in the clinical manifestations of Rett syndrome, to understand in much greater detail how the inhibition of PTP1B will modify the varied effects of the disorder in the body. 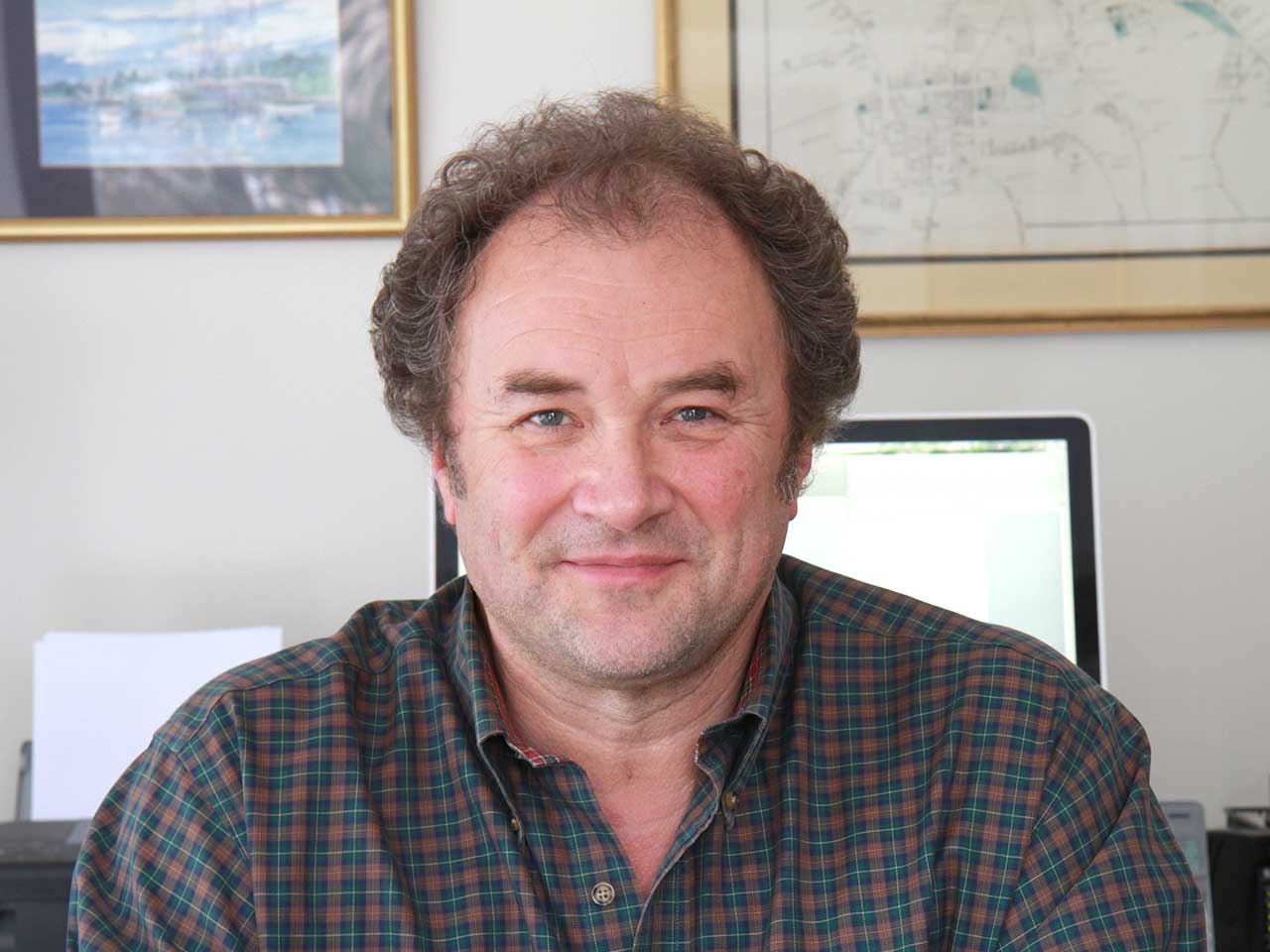 Novel drugs find ways around obstacles of the pathway within cells that regulates the response to insulin.   Read more »

Hydrogen sulfide plays an important role in the regulation of a signaling pathway implicated in biological malfunctions linked to Alzheimer’s.   Read more »