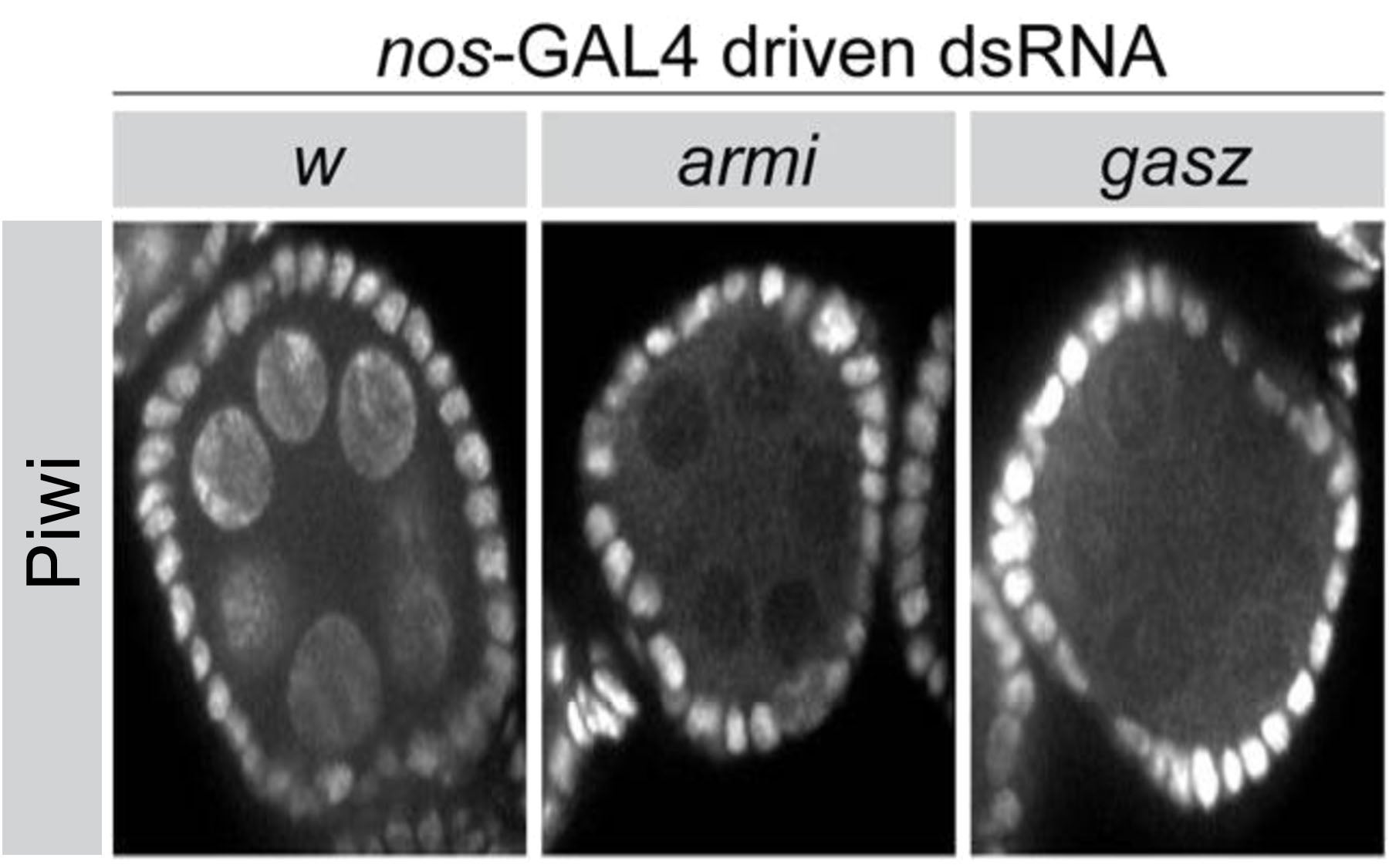 These three images show an egg chamber in a fly ovary. The image at far left is the normal state with transposon control operative; the six circular areas are fly ovary nuclei, tagged to reflect the presence of the Piwi protein. Piwi is absent in the middle and right images, in which, respectively, genes called armi and gasz are knocked down. These are two of the genes found by the Hannon lab to be essential for transposon control in the female germline. When the genes are knocked down and Piwi is absent, the door is opened to transposon activation
email envelop icontwitter icon share buttonfacebook icon share buttonlinkedin icon share button

The piRNA pathway protects eggs and sperm from ‘jumping genes’ that can cause developmental defects, sterility

When activated, these troublesome segments of DNA, also called jumping genes or transposons, can copy and insert themselves at random spots across the chromosomes. In sperm and egg cells the proliferation of transposons can be particularly devastating, causing severe developmental impairments in offspring as well as sterility. Over the eons of evolution, complex organisms have developed means of defending their germline genomes against transposons, principally via a series of mechanisms that scientists call the piRNA pathway.

In animals, this pathway involves a family of proteins—called Piwi proteins—that combine with a variety of small RNA molecules called Piwi-interacting RNAs, or piRNAs. Since the discovery of piRNAs in 2006, scientists have been trying to understand how they are created, and how they do the essential job of repressing transposons—which are plentiful although usually inactive throughout the genomes of nearly every species.

Some important players in the piRNA pathway are known, but the majority have remained mysterious. “That’s why the two new studies from our lab are important,” says Hannon, who is also an Investigator of the Howard Hughes Medical Institute. “We’ve identified dozens of genes essential for proper function of the piRNA pathway, and have looked at some of them in detail.” The work advances knowledge of how the pathway works, and provides others studying it a basis for fleshing out the mechanism in its entirety.

“It’s a major step toward our goal of obtaining the blueprints for reconstructing a fully operational piRNA transposon-silencing machinery in the lab,” according to Felix Muerdter, a Ph.D. candidate, who joined three other scientists in the Hannon lab—Drs. Benjamin Czech, Jonathan Preall, and Paloma Guzzardo—in conducting the experiments and co-authoring the new papers.

To be able to assemble the machinery active in repressing transposons will be to understand in unprecedented detail how our cells, more broadly, selectively detect and silence genes. This knowledge promises to play a role in finding new ways to treat complex diseases involving gene dysfunction, ranging from cancer to schizophrenia.

The two Hannon teams performed their experiments in fruit flies, which possess all of the fundamental elements of germline defense that humans do, owing to the phenomenon that biologists call sequence conservation. It is nature’s way of preserving life’s most essential mechanisms across species.

The two Hannon lab teams used the same meticulous means of uncovering new piRNA pathway components, albeit in different kinds of cells. Czech, Preall and their group worked with female germ cells; Muerdter and Guzzardo focused on follicle cells, which are found inside the female egg chamber but are derived from somatic cells—the cell type that comprises all of an organism’s non-sex cells.

Both groups performed RNA interference (RNAi) screens against large numbers of genes in the cell types they studied. These screens use small RNAs to “knock down” the activity of specific genes. Czech and Preall’s group knocked down all 8000 genes expressed in the fly ovary, one at a time. Muerdter and Guzzardo knocked down all 13,900 genes in the fly genome in similar fashion. The purpose of these experiments was to see what happened to transposon levels when single genes were no longer functional.

In both groups, the screens led to the identification of dozens of genes whose absence was shown to impair transposon repression. Both groups later selected one or two genes in their screens whose knock-down had the most potent impact on transposon proliferation. For Muerdter and Guzzardo, repression of a gene they named asterix caused levels of a transposon called gypsy to soar. But how?

How gypsy is repressed

When gypsy DNA is expressed, it begins to generate an RNA “message,” a preliminary step in the transposon proliferation process. When the asterix gene was knocked down, this is precisely what happened. “Normally, the Piwi protein, forming a complex with a small RNA, can recognize a sequence on this RNA message,” Guzzardo explains. “When the piRNA finds the sequence, it attaches and the process of transcription stops.”

The new work makes clear why: attachment of the piRNA to the gypsy message causes histones—proteins that pack gypsy DNA—to take on chemical modifications (called H3K9 trimethylation marks) that tag it as “silent.” The DNA cannot be accessed by the gene-expression machinery; gypsy is thus kept in a dormant state.

Without asterix, the tag that renders gypsy silent is absent, and the gypsy gene thus becomes accessible to the machinery in the nucleus that starts to transcribe it. The transposon can now proliferate.

Czech and Preall, doing similar work exclusively in the ovary, found some of the same genes to be active in repressing transposons in those cells, thus making clear that they are components of what can now be called a “core piRNA pathway.” In the fly ovary, many more transposons—80 to 100—can potentially be activated than in follicle and other somatic cells, in which the corresponding number is around 20 to 30. For this reason, piRNA mechanisms in the female germline cells are more elaborate, and involve more genes and probably more accessory proteins in the transposon repression process, according to Czech.

“Our screens have identified a set of genes involved in transposon suppression in the female ovary of the fly,” Czech says. “We’re excited to have generated what appears to be a comprehensive list of core components of the piRNA pathway, and hope that this spurs further discovery in other labs. Our next job is to distinguish members of the pathway involved in generating piRNAs from those we call ‘effectors,’ and ultimately bring to light the molecular mechanisms underlying piRNA biogenesis and effector functions.”