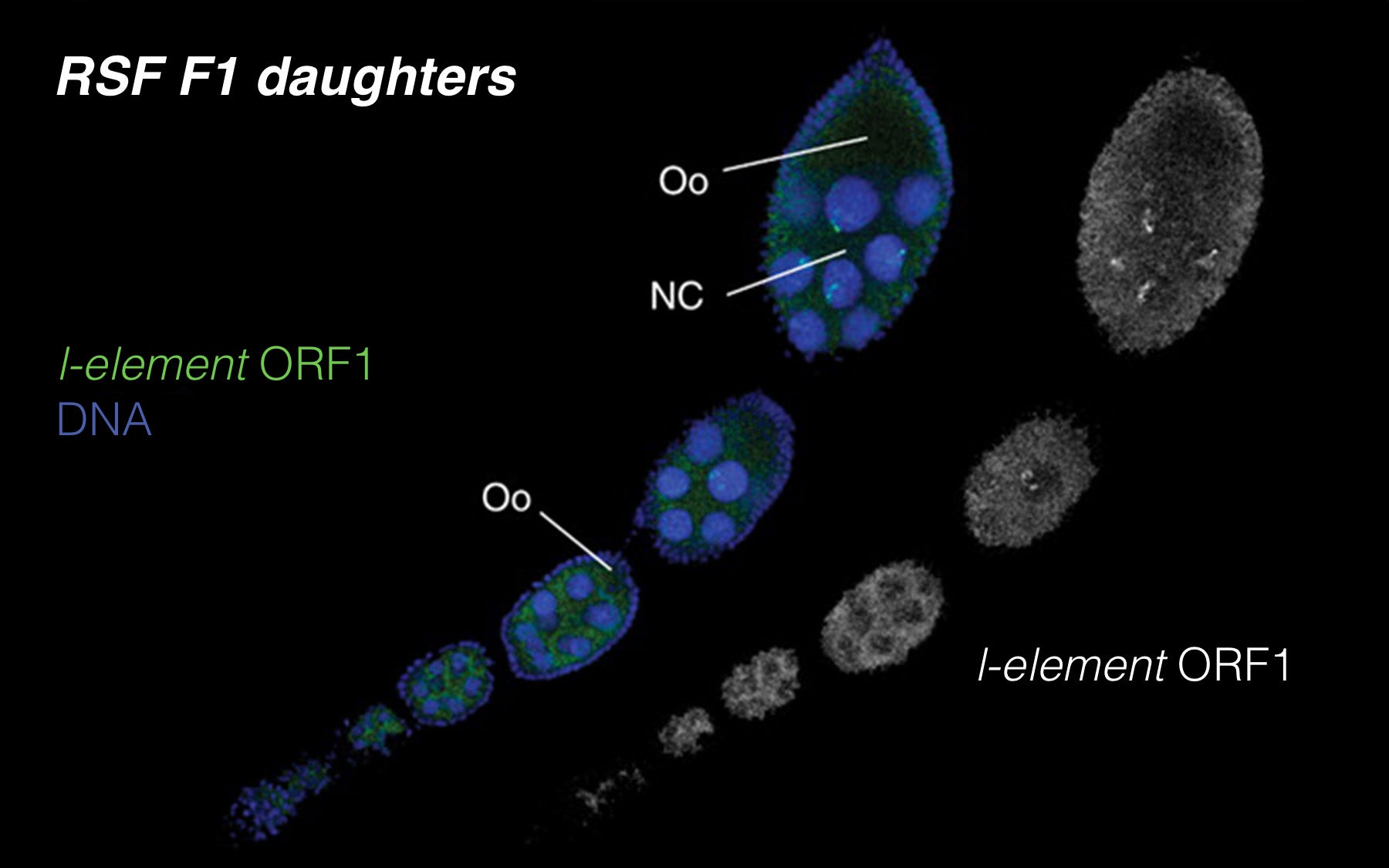 Cold Spring Harbor, NY — Hereditary information flows from parents to offspring not just through DNA but also through the millions of proteins and other molecules that cling to it. These modifications of DNA, known as “epigenetic marks,” act both as a switch and a dial—they can determine which genes should be turned on or off, and how much message an “on” gene should produce.

One way in which epigenetic information is known to be passed from parent to offspring is through the pattern of chemical “caps” added onto certain “letters” of the DNA sequence, ensuring the sequence is “silenced.” How these DNA capping patterns, which are inherited, are precisely set is not yet known. But in some cases, enzymes that add these caps are guided to DNA by small RNA molecules. These guides themselves do not carry hereditary information, but they do mark the spots where DNA is to be modified.

A team of scientists at Cold Spring Harbor Laboratory (CSHL) led by Professor Gregory J. Hannon, Ph.D., has now discovered that a class of small RNAs does carry epigenetic information and, in fact, passes on the trait of fertility from mother to offspring in fruit flies.

A new mechanism of inheritance

In a paper published on Nov 27th in Science, the CSHL team reports that maternal small RNAs called Piwi-interacting RNAs (piRNAs) that are deposited into fruit fly embryos “silence” DNA sequences that induce sterility, thus ensuring the fertility of the progeny. “This is a whole new way in which heredity can be transmitted,” says Professor Hannon, who is a pioneer in small RNA research. “With this finding, we’ve effectively doubled the number of mechanisms by which epigenetic information is known to be inherited.”

The piRNAs are found only in cells of sex organs and partner up with proteins called Piwi to suppress the activity of mobile DNA sequences called transposons. Discovered half a century ago by CSHL scientist and Nobel laureate Barbara McClintock, Ph.D., transposons jump around the genome, inserting themselves into genes and causing mutations. Such genetic havoc is thought to underlie many diseases, including cancer.

A high rate of mutations also disturbs gametogenesis—the process of creating viable sex cells—and can result in sterility. Piwi proteins and piRNAs form something akin to an immune system in sex cells that guards against transposon-inflicted genome damage.

The CSHL team wondered whether piRNAs were also the key to a long-standing conundrum about fertility in fruit flies. When lab-bred female flies are bred with male flies caught in the wild, their progeny are sterile or unable to produce offspring—a phenomenon called hybrid dysgenesis. But the genetically identical offspring of wild-caught female flies and lab-bred males are fertile. The genetic difference between the lab-bred and wild flies is a single transposon, which is absent in lab strains.

In hybrid dysgenesis, the transmission of the transposon by a parent induces sterility in the offspring unless the offspring also inherits a factor that suppresses the transposon and maintains fertility. Since the phenomenon had only been seen when the transposon-transmitting parent was male, the suppressing factor was thought to be maternally transmitted. But it was never identified.

Hannon’s team has now found that the stockpile of maternally derived proteins, RNA, and nourishing raw material in developing fruit fly oocytes, or egg cells, also includes piRNAs. And these maternally deposited piRNAs prove to be essential for mounting a silencing response against transposons.

Hannon likens this protection to that afforded by the adaptive immune system which protects against pathogens like bacteria and viruses. “We’ve evolved ways to transmit immunity from mother to child via the secretion of antibodies,” he says, referring to the proteins that can cross the placenta and protect the fetus or get passed on to an infant via breast-milk. “We now have a way in which immunity (against sterility) is passed on from mother to child, in flies but possibly other organisms also, via small RNAs.”

In contrast to short-lived adaptive immunity, however, this small RNA-driven immunity has a long reach. The team’s experiments show that the effect on fertility doesn’t just impact the child alone, but also the next generation. Because the trait—fertility—is controlled or encoded in the RNA, “you’re passing on a trait that’s essentially not only controlling an event that happens in the organism’s adulthood, but is also propagated to the progeny of that organism,” explains Hannon.

The impact of environment

The ability of the mother to transmit epigenetic information can be altered by the environment that she finds herself in. Other researchers have found that raising the temperature in which female flies are reared raises the proportion of fertile progeny.

To the CSHL team, this suggests that “the experience of the mother translates into a dominant effect on the progeny.” The group’s data suggest that one way that the mother’s experience might get communicated to the child is through variations in the populations of small RNAs that get deposited in the oocytes.

Now that one trait has been discovered to be driven by maternally inherited piRNA, Hannon is eager to know if the spectrum of information that’s transmitted in this way can be broadened to cover other cellular processes. And of course, it also remains to be seen whether this mechanism of epigenetic inheritance is found in organisms besides fruit flies. “Small RNAs are probably deposited in oocytes of every animal,” he hypothesizes.