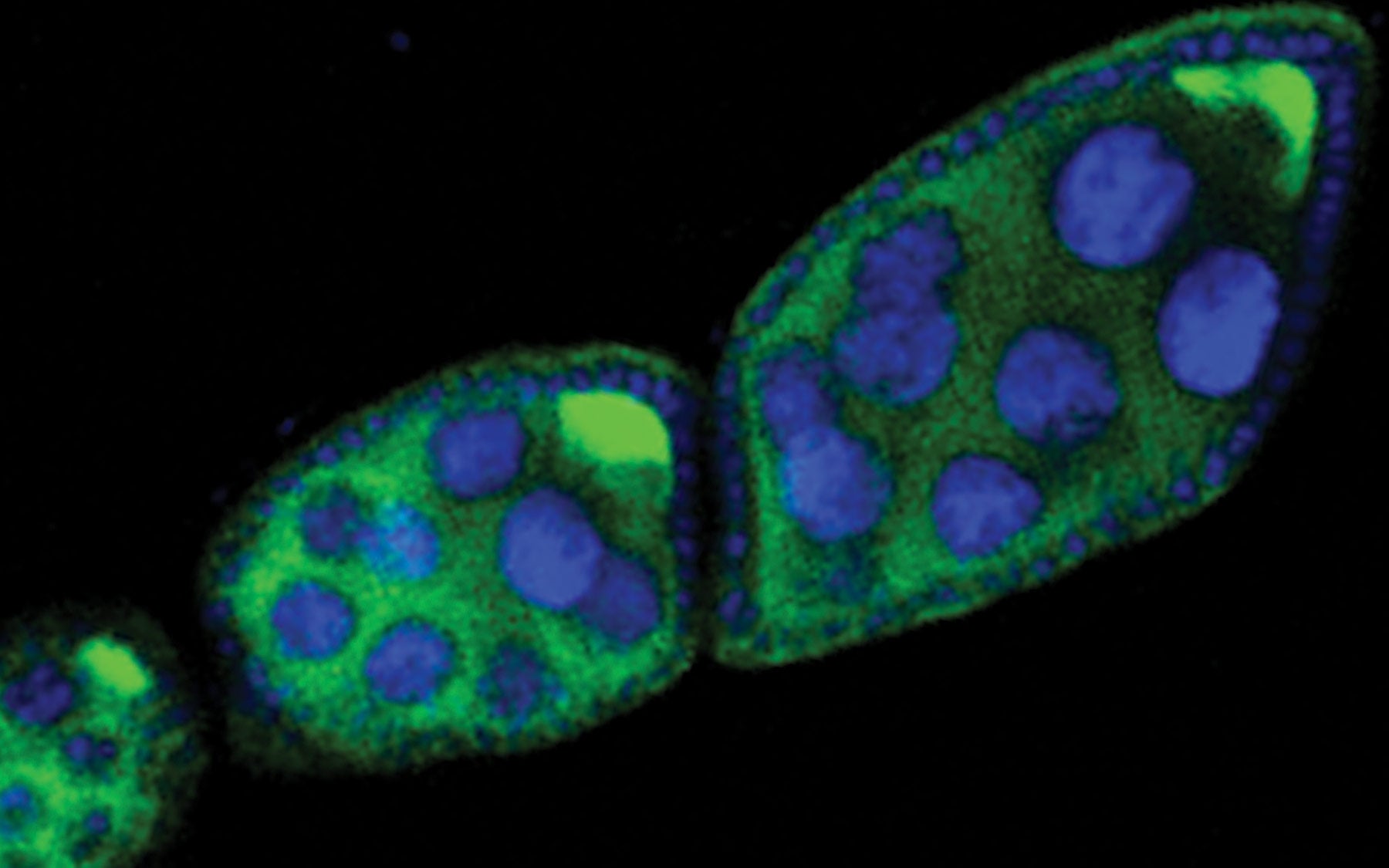 The piwi-RNA pathway is vital to genome integrity and the wellbeing of offspring. This image, from prior research in the Hannon Lab, shows a developing fruit fly egg chamber in which several blue-colored “nurse cells” that support the egg are prominent. The bright green area in the upper right portion of the egg is a fluorescent tag signaling the presence of a type of transposon, a harbinger of sterility. The fly that develops from this egg will be sterile. In their latest study, Hannon and colleagues discovered the link between the piwi-RNA pathway, which very specifically finds transposons as RNA copies emerge, and the more general repressive machinery of the cell. The link proved to be a guide protein they named Panoramix, after a comic book character who endows others with great powers. Hannon’s colleagues have playfully named the protein Panoramix, after a comic book character who endows others with great power.
email envelop icontwitter icon share buttonfacebook icon share buttonlinkedin icon share button

Protein named for comic book hero is no joke: it guides gene-silencing machinery to sites of havoc-causing transposons

Cold Spring Harbor, NY — Organisms from bacteria to humans must defend themselves against parasitic genetic elements called transposons, and the stakes are high. These pieces of DNA, which disrupt genes by jumping around in the genome, can cause so much destruction that cells have dedicated surveillance mechanisms to keep them in check.

To protect future generations against genomic havoc, defects in these innate defense systems usually result in sterility. In animals, the main defense against troublemaking transposons is the Piwi-interacting RNA pathway.

In new research, scientists led by Cold Spring Harbor Laboratory (CSHL) Professor Gregory Hannon, who is also a Professor and Senior Group Leader at the CRUK Cambridge Institute at the University of Cambridge, have identified a protein the Piwi system uses to guide a cell’s gene-silencing machinery to the right spots in the genome, allowing it to keep transposons inactive without interfering with the organism’s own genes.

The Piwi-interacting RNA pathway, which is active in germline cells—those that give rise to sperm and eggs—is a double-tiered defense system. The most direct line of defense finds and chews up RNA copies of transposons, while a second mechanism finds transposons within the genome and tags them with chemical signals that instruct the cell to keep them inactive. “These two modes of control provide the tightest possible clamp on the system,” Hannon says.

For the current study, Hannon and his colleagues focused on the system that chemically tags transposon DNA. This happens just as the elements are preparing to move, when transposon DNA is copied from its place in the genome into RNA, a process known as transcription.

The challenge for the Piwi system, Hannon explains, is to locate these sequences—which look a lot like an organism’s own genes—and tag them so they can be recognized by the same machinery a cell uses to switch its own genes off as needed. Small RNA molecules called Piwi-interacting RNAs are thought to be responsible for finding transposons as RNA copies emerge, but the next step was unexplained. “We wanted to find the link between this very transposon-specific pathway to the more general repressive machinery of the cell,” Hannon explains.

The scientists had a list of molecules they thought might play this role, and Yang Yu, a postdoctoral researcher in Hannon’s lab at CSHL, set out to test them. The Piwi system is so fast that scientists have found it nearly impossible to follow its components as they silence their natural targets. So Yu constructed an artificial Piwi target, then stuck different components of the Piwi system to it and monitored what happened next.

In most situations, cells treated the piece of DNA that encoded the target as one of their own genes. But when Panoramix was tethered to the artificial RNA target, it was able to halt transcription of the foreign piece of DNA. That suggested that as soon as transcription began, Panoramix recruited the cell’s gene silencing machinery to shut off local transcription and mark the intrusive DNA so that it would remain off, even in future generations.

“This is an incredibly specific phenomenon,” Hannon says, noting that Panoramix summons the cell’s gene-silencing machinery without affecting the activity of any of the fruit fly’s own genes.

Although no Panoramix protein has been found in mammals, Hannon says it is very likely that humans and other animals have a related protein that carries out the same role.

This work was supported by the National Institutes of Health, the American Heart Association, HHMI and Cancer Research UK.

Breaking the chain that culminates in cancer

CSHL scientists have discovered a way to shut down a cancer-causing protein by inhibiting a cascade of proteins that activate it.   Read more »