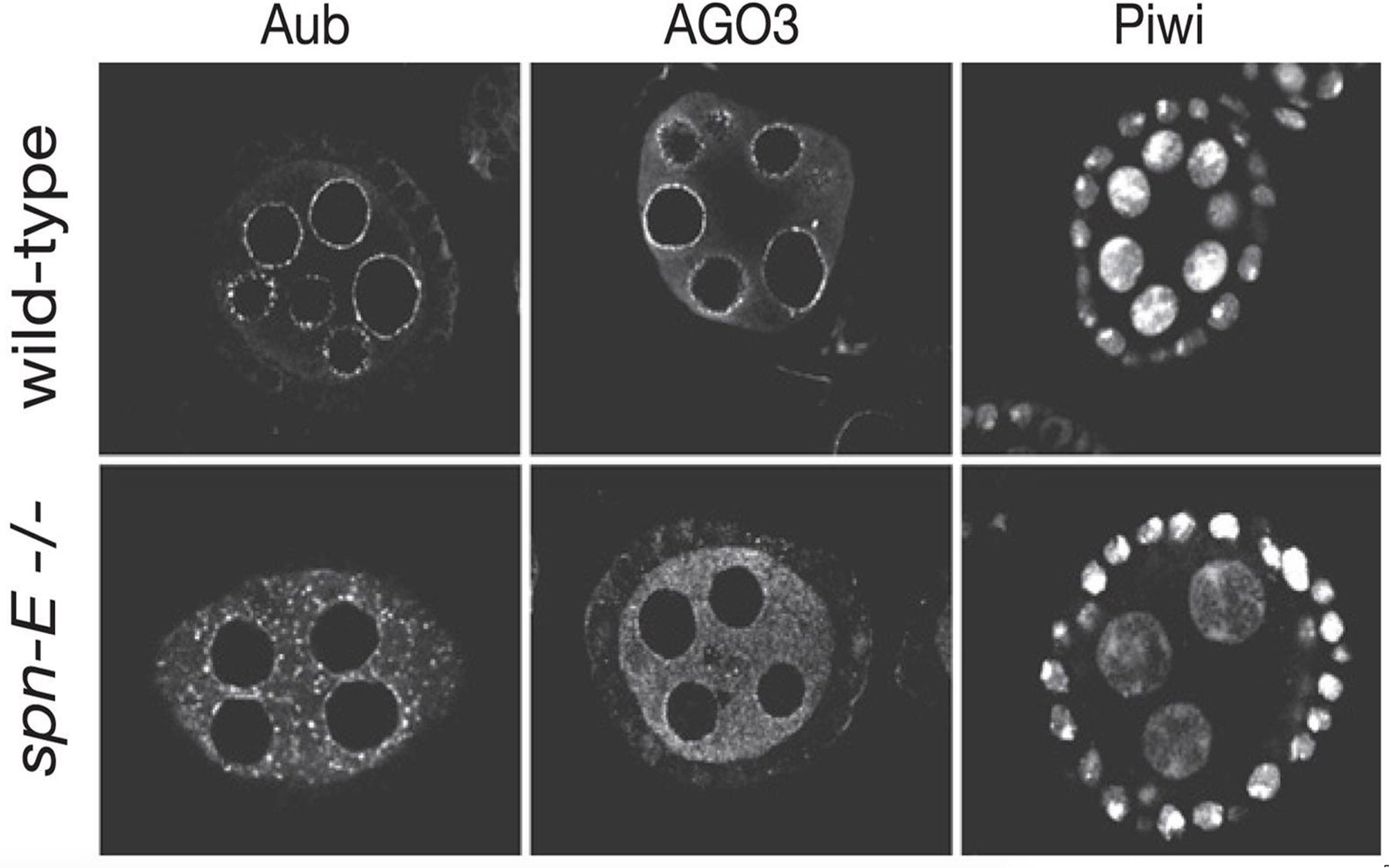 Mutations, which disrupted the ping-pong cycle, shared the impact of Aub lesions on the localization of piRNA pathway components to nuage (a signature feature of germ cells in animals, which all share a need to guard their genomes from mobile elements). spn-E mutant cells have altered Aub and AGO3 staining, while maintaining the characteristic localization of Piwi in the nuclei of both somatic and germ cells.
email envelop icontwitter icon share buttonfacebook icon share buttonlinkedin icon share button

In the fruit fly ovary, germline and somatic cells use different piRNA pathways in transposon defense

Cold Spring Harbor, NY — Cells of higher organisms are in a constant struggle against some of their own DNA—repeated bits of DNA sequence called transposons that have infiltrated host genomes over the eons. Transposons damage the rest of the genome when they copy themselves and jump into new genomic sites.

To protect themselves from these genetic parasites, animal germ line cells, such as sperm and eggs, whose mission is to pass on undamaged DNA to the next generation, have developed a molecular immune system. This system is operated by an army of small RNA molecules called Piwi-interacting RNAs (piRNAs) and a set of proteins belonging to the Piwi family.

In a new study appearing in the May 1 issue of Cell, Professor Gregory Hannon, Ph.D., of Cold Spring Harbor Laboratory (CSHL), and his team, report that in the ovaries of fruit flies, non-germ line, or “somatic cells” that surround germ line cells have also developed an anti-transposon defense system.

The piRNAs and protein components of this somatic system, however, are distinct from their counterparts within germ line cells, the researchers show. The system that defends somatic cells specifically guards against a particular class of transposon called gypsy elements. These bits of DNA mobilize themselves for attacks in a way that differs from that used by transposons observed to be active in germ cells.

Many transposons—which, as noted, begin as bits of DNA—use a chameleon-like strategy to propagate themselves. They are first transcribed into RNA, which in turn gets copied back into a new DNA segment. That new segment is then inserted into a new genomic location. Gypsy elements similarly begin to mobilize by first converting into RNA, but are then processed into virus-like particles that propagate by infecting neighboring cells. “But the step in which the transposon is transcribed to RNA is also an Achilles heel,” notes Hannon. “Cells are able to defend themselves by targeting the transposons during this intermediate RNA step.”

The cell’s counter-response is a form of defense called RNA interference, in which piRNAs partner with members of the Piwi protein family—called Argonaute3 (AGO3), Aubergine (Aub) and Piwi—to “silence” transposons. These three proteins act as molecular “scissors” that slice up transposon RNA, having been led to them by piRNA “guides.”

While all three Piwi proteins—AGO3, Aub and Piwi—are found in germ cells, Hannon and the CSHL team found only the Piwi protein in somatic cells that surround germ line cells. This suggested to them possible differences in the architecture of the piRNA pathway between the two cell types.

But how to separate RNA and protein components of the germ cells from that of the surrounding somatic cells?  “We simply exploited the fruit fly’s natural biology to do this,” says Colin Malone, a graduate student in the Hannon lab who led the current study. When fruit fly germ cells develop into embryos, they shed the surrounding somatic cells. A newly laid egg thus includes RNA and protein components that are present only in the germline, and not the ovary’s somatic tissue.

By comparing piRNAs in embryos to those in the ovary, then, the CSHL team discovered that while germ cells contained piRNAs targeted to a variety of transposons, the somatic piRNA fraction utilizes only the Piwi protein to selectively suppress gypsy transposons.

The somatic cells, therefore, appear to make use of a simplified form of the piRNA “scaffold,” employing only one Piwi protein and particular piRNAs to defend against a single class of transposons—the gypsy elements, which might try to gain access to adjacent germ cells through their ability to package themselves like a virus.

Somatic cells are defended by the flamenco piRNA cluster

piRNAs arise from so-called ‘transposon graveyards’ in the genome, where transposon remnants that can no longer jump are clustered. Scientists speculate that these clusters persist in genomes to provide host cells with a “memory” of previous transposon exposure.

“Once a transposon jumps into a piRNA cluster, that transposon’s future is grim,” says Malone. The cell will immediately make piRNAs that target this transposon, so that any future activity is immediately blocked.

Hannon’s lab had previously found that piRNAs generated from most clusters get amplified in number via a “ping-pong” mechanism—reciprocal cycles of cleavage of RNA molecules by pairs of Piwi-family proteins. They now find that only germ cells use this mechanism to generate and amplify their piRNA stockpile.

In somatic cells, however, the scientists found that the piRNAs utilized by the sole Piwi protein arise from a single cluster called flamenco. This cluster, the authors suggest, appears to be conserved—unchanged over evolutionary time—in most Drosophila species. This, in fact, represents tens of millions of years of evolution.

Preliminary thoughts about the significance of the finding

“The gypsy family may have evolved their own mobilization strategy in the soma to evade the extensive anti-transposon surveillance system already in place in the neighboring germ cells,” explains Malone. “The somatic cells, in turn, might have adapted a distinct piRNA pathway, centered on Piwi and the flamenco cluster, as a counter-evolutionary move to cope with this unique threat.”

Over the years, fruit fly researchers have uncovered a number of genomic mutations that lead to sterility and abnormal development. Since these defects could have been caused by unchecked transposon activity, mutant flies are a good experimental resource to uncover exactly how piRNA pathways work and how they might get disrupted.

The Hannon team has analyzed eight such mutants, showing how the genes disrupted in each mutant impact the piRNA pathway and how it alters the type and number of piRNAs that cells are able to generate.

“We are beginning to paint a broad picture of how the piRNA pathway has been genetically stitched together,” says Hannon. “This work brings decades of research into a cohesive model that can be used as the starting point to understand how each gene that contributes to a fly’s biological phenotype is acting at the molecular level.”