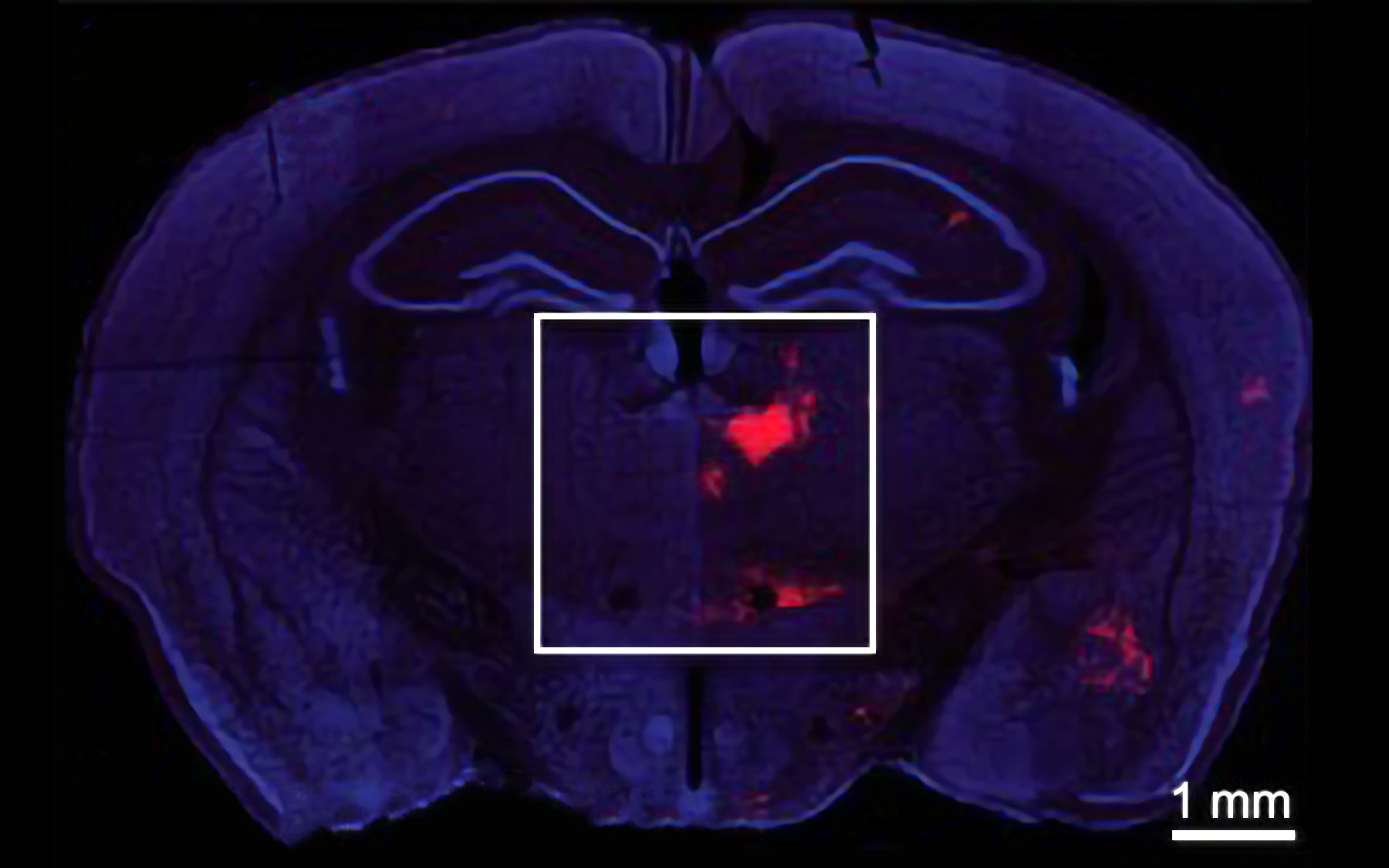 A coronal section of a mouse brain. Bo Li and colleagues induced PV interneurons of the medial prefrontal cortex (mPFC) to produce a red fluorescent marker that illuminates any neurons providing input to them. A direct connection is implied, therefore, with red-labeled neurons seen in this image, located in the mediodorsal thalamus (MD). Li’s team has discovered an inhibitory circuit between the two brain areas that when disrupted may underlie cognitive disorders such as schizophrenia.
email envelop icontwitter icon share buttonfacebook icon share buttonlinkedin icon share button

Cold Spring Harbor, NY — The prefrontal cortex (PFC) plays an important role in cognitive functions such as attention, memory and decision-making. Faulty wiring between PFC and other brain areas is thought to give rise to a variety of cognitive disorders. Disruptions to one particular brain circuit—between the PFC and another part of the brain called the thalamus—have been associated with schizophrenia, but the mechanistic details are unknown. Now, Cold Spring Harbor Laboratory scientists have discovered an inhibitory connection between these brain areas in mice that can control the timing of information flow into PFC. This insight may help explain what goes wrong in schizophrenia and indicate a path to new treatments.

“The PFC and thalamus have been implicated in schizophrenia in studies of humans as well as animal models,” says CSHL Associate Professor Bo Li, “yet the mechanism underlying the communication between these two areas has been unclear.”

The thalamus acts as a gateway through which information from other parts of the brain is collected and processed before being sent on to the cortex. This thalamocortical circuit is often fine-tuned by inhibitory neurons, which tamp down signaling between message-propagating excitatory neurons. Li and colleagues focused on connections between sections of the PFC and the thalamus called the medial prefrontal cortex (mPFC) and the mediodorsal thalamus (MD). They observed a process called feedforward inhibition, a mechanism in which one neuron excites a neighboring or “downstream” neuron, but also recruits a third neuron to inhibit the downstream target after some delay.

This process opens a narrow window in time during which the target neuron can be activated. When the thalamus propagates information gathered from the senses, feedforward inhibition acts to filter out extraneous inputs, resulting in highly precise sensory representations. Prior to the current research it was not known whether a similar inhibitory mechanism exists for the neural connection between mPFC and MD. The latter is an area associated with cognitive functioning rather than sensory processing.

As described in work published today in The Journal of Neuroscience, Li and his colleagues used optogenetic stimulation, a technique in which neurons expressing a light-sensitive protein are controlled with pulses of light, to activate neurons in the thalamus. These neurons in turn activated two classes of cells in the prefrontal cortex—inhibitory PV interneurons as well as excitatory pyramidal neurons. The relative timing of their activation suggested to Li’s team that the inhibitory cells might be shaping the activity of the excitatory ones. The team now proposes that PV interneurons can dictate the time period during which the pyramidal neurons integrate excitatory input from neurons in the thalamus.

“The current problem for treating schizophrenia is the lack of drugs that work, so the discovery of this mechanism for the disease is exciting,” says Li. “This work is just the beginning of efforts to specify a neural pathway implicated in schizophrenia and what changes occur in this pathway.”

In future experiments, Li and his team will assess in a genetic mouse model of schizophrenia whether there are any noticeable changes in the observed feedforward inhibition in the MD-mPFC pathway. “This research can guide us to develop methods to reverse any changes we see in the MD-mPFC pathway in the animal model and could lead to improved therapeutics for this disease,” says Li.

This work was supported by grants from NIH, the Brain and Behavior Research Foundation, and the Stanley Family Foundation.

“The Mediodorsal Thalamus Drives Feedforward Inhibition in the Anterior Cingulate Cortex via Parvalbumin Interneurons” appears online in The Journal of Neuroscience on March TK, 2015. The authors are Kristen Delevich, Jason Tucciarone, Z. Josh Huang, and Bo Li. The paper can be obtained online at: http://www.jneurosci.org.

Dealing with stress—to cope or to quit?