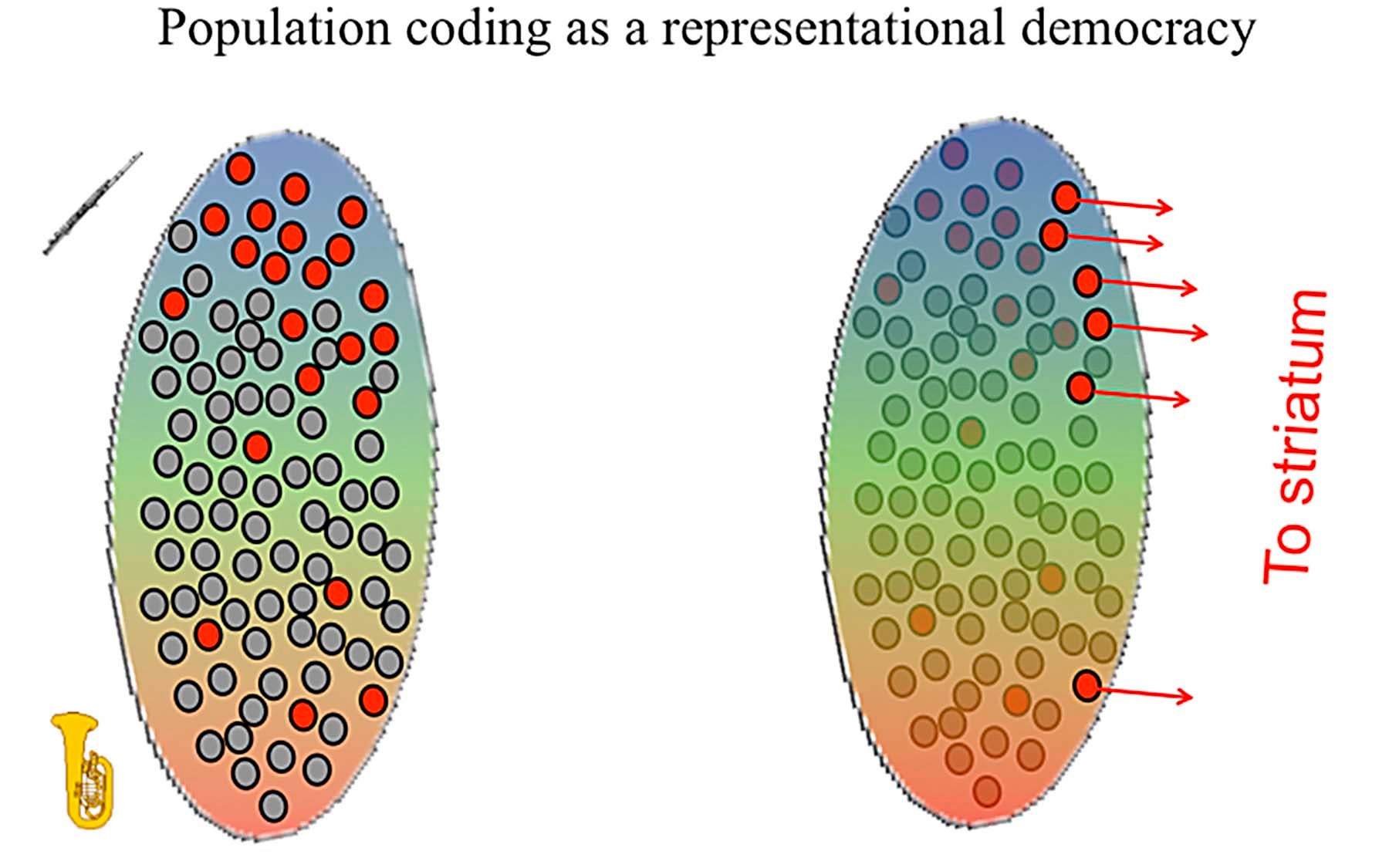 Cold Spring Harbor, NY — When a pedestrian hears the screech of a car’s brakes, she has to decide whether, and if so, how, to move in response. Is the action taking place blocks away, or 20 feet to the left?

One of the truly primal mechanisms that we depend on every day of our lives—acting on the basis of information gathered by our sense of hearing—is yielding its secrets to modern neuroscience. A team of researchers from Cold Spring Harbor Laboratory (CSHL) today publishes experimental results in the journal Nature which they describe as surprising. The results fill in a key piece of the puzzle about how mammals act on the basis of sound cues.

It’s well known that sounds detected by the ears wind up in a part of the brain called the auditory cortex, where they are translated—transduced—into information that scientists call representations. These representations, in turn, form the informational basis upon which other parts of the brain can make decisions and issue commands for specific actions.

What scientists have not understood is what happens between the auditory cortex and portions of the brain that ultimately issue commands, say, for muscles to move in response to the sound of that car’s screeching brakes.

To find out, CSHL Professor Anthony Zador and Dr. Petr Znamenskiy trained rats to listen to sounds and to make decisions based on those sounds. When a high-frequency sound is played, the animals are rewarded if they move to the left.  When the sound is low-pitched, the reward is given if the animal moves right.

On the simplest level, says Zador, “we know that sound is coming into the ear; and we know what’s coming out in the end—a decision,” in the form of a muscle movement. The surprise, he says, is the destination of the information used by the animal to perform this task of discriminating between sounds of high and low frequency, as revealed in his team’s experiments.

“It turns out the information passes through a particular subset of neurons in the auditory cortex whose axons wind up in another part of the brain, called the striatum,” says Zador. The classic series of experiments that provided inspiration and a model for this work, performed at Stanford University by William Newsome and colleagues, involved the visual system of primates, and had led Zador to expect by analogy that representations formed in the auditory cortex would lead to other locations within the cortex.

These experiments in rats have implications for how neural circuits make decisions, according to Zador. Even though many neurons in auditory cortex are “tuned” to low or high frequencies, most do not transmit their information directly to the striatum. Rather, their information is transmitted by a much smaller number of neurons in their vicinity, which convey their “votes” directly to the striatum.

“This is like the difference between a direct democracy and a representative democracy, of the type we have in the United States,” Zador explains. “In a direct democracy model of how the auditory cortex conveys information to the rest of the brain, every neuron activated by a low- or high-pitched sound would have a ‘vote.’ Since there is noise in every perception, some minority of neurons will indicate ‘low’ when the sound is in fact ‘high,’ and vice-versa.  In the direct democracy model, the information sent to the striatum for further action would be the equivalent of a simple sum of all these votes.

“In contrast—and this is what we found to be the case—the neurons registering ‘high’ and ‘low’ are represented by a specialized subset of neurons in their local area, which we might liken to members of Congress or the Electoral College: these, in turn, transmit the votes of the larger population to the place—in this case the auditory striatum—in which decisions are made and actions are taken.”

The research described in this release was supported by grants from the Swartz Foundation and the U.S. National Institutes of Health (grant no. 25041001 and 55120101).

“Corticostriatal neurones in auditory cortex drive decisions during auditory discrimination” appears online ahead of print in Nature on May 1, 2013. the authors are: Petr Znamenskiy and Anthony M. Zador. the paper can be obtained online at www.nature.com

A Banbury Center meeting of 35 experts proposes a new field to study the relationship between cancer and neuroscience.   Read more »