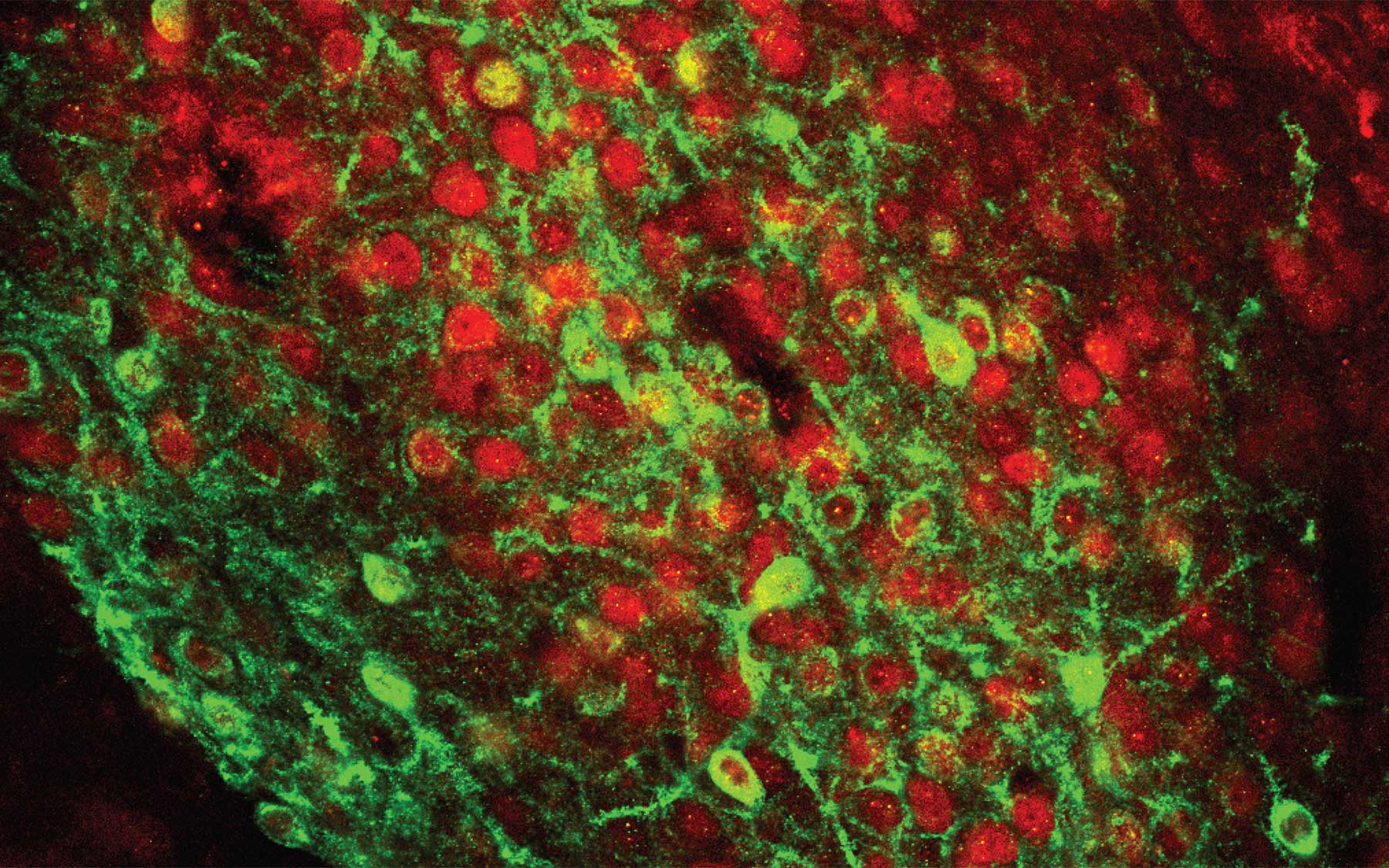 What happens in the brain when we learn that fire is very hot and can hurt us? It’s the kind of learning that results from the association of a sensory stimulus and the perception of threat. New research revises our view of aversive learning and paves the way to finding better treatments for PTSD and anxiety.

Cold Spring Harbor, NY — Our brains wire themselves up during development according to a series of remarkable genetic programs that have evolved over millions of years. But so much of our behavior is the product of things we learn only after we emerge from the womb. We aren’t born with instructions to avoid putting our hands on a hot stove. That knowledge comes from experience. We survive and thrive thanks to hard-won knowledge obtained from our experiences.

What happens in the brain when we learn that fire is very hot and can hurt us? It’s the kind of learning that results from the association of a sensory stimulus and the perception of threat. New research in mice appearing today in Nature Neuroscience suggests that the accepted understanding of that critical operation is incorrect in important respects.

A neuroscience team at Cold Spring Harbor Laboratory (CSHL) led by Professor Bo Li studied the relationship between two parts of the brain’s amygdala—an almond-shaped structure that comes in pairs, one situated on each side of the mouse and other vertebrate brains. The amygdalae are centrally involved in learning and memory.

According to textbooks, the lateral portion of the amygdala is where associations are forged between sensory information and the perception of threat. That linkage is a crucial example of what scientists call aversive learning.

Li’s team performed experiments indicating that while the lateral amygdala is involved in aversive learning, it is not the seat of the process. The new evidence points to the central amygdala instead. If correct, this could change approaches to modify memory to treat disorders such as anxiety and post-traumatic stress disorder (PTSD).

One series of experiments involved giving a mild foot shock to mice and then imaging the central and lateral parts of the amygdala. This showed that the response to an uncomfortable feeling begins in the central amygdala, then registers in the lateral amygdala. The team also blocked the activity of a particular set of neurons in the central amygdala—cells named for a protein they express called PKC-delta (protein kinase C-delta). When mice with blocked cells were given a foot shock, there was greatly reduced activity in the lateral amygdala—where the conventional view says activity is centered.

A final set of experiments had the intriguing aim of giving mice artificial memories—memories of discomfort like that of getting a mild shock. This is done using optogenetics, a technology in which pulses of colored laser light are used to activate specific neurons, in this case the PKC-delta neurons of the central amygdala.

“This causes no pain to the mice, but they don’t like it—it makes them feel uncomfortable, just as getting a mild shock makes them uncomfortable. It’s the kind of stimulation that leads to an aversive memory, the kind you learn from,” explains Li. In effect, the scientists create a memory of a discomfort never actually experienced. The experiment shows that activation of the PKC-delta cells in the central amygdala is indeed at the heart of the aversive learning process.

This was concluded after placing the mice given the optogenetic stimulus into a cage with two chambers. Mice that received the stimulation “remembered” the discomfort and associated it with the place where they experienced it—one of the two chambers. Later, given the freedom to move about in this space, none of the “treated” mice would venture back to the chamber where the stimulation was given; they were afraid of it.

Li and his team hope that this information will inform ongoing efforts to find ways of altering fear memories that are based on spurious associations—for example, a combat veteran freezing in fear or experiencing panic at the sound of a backfiring car.

What happens in the brain when we learn that fire is very hot and can hurt us? It’s the kind of learning that results from the association of a sensory stimulus and the perception of threat. New research revises our view of aversive learning and paves the way to finding better treatments for PTSD and anxiety.