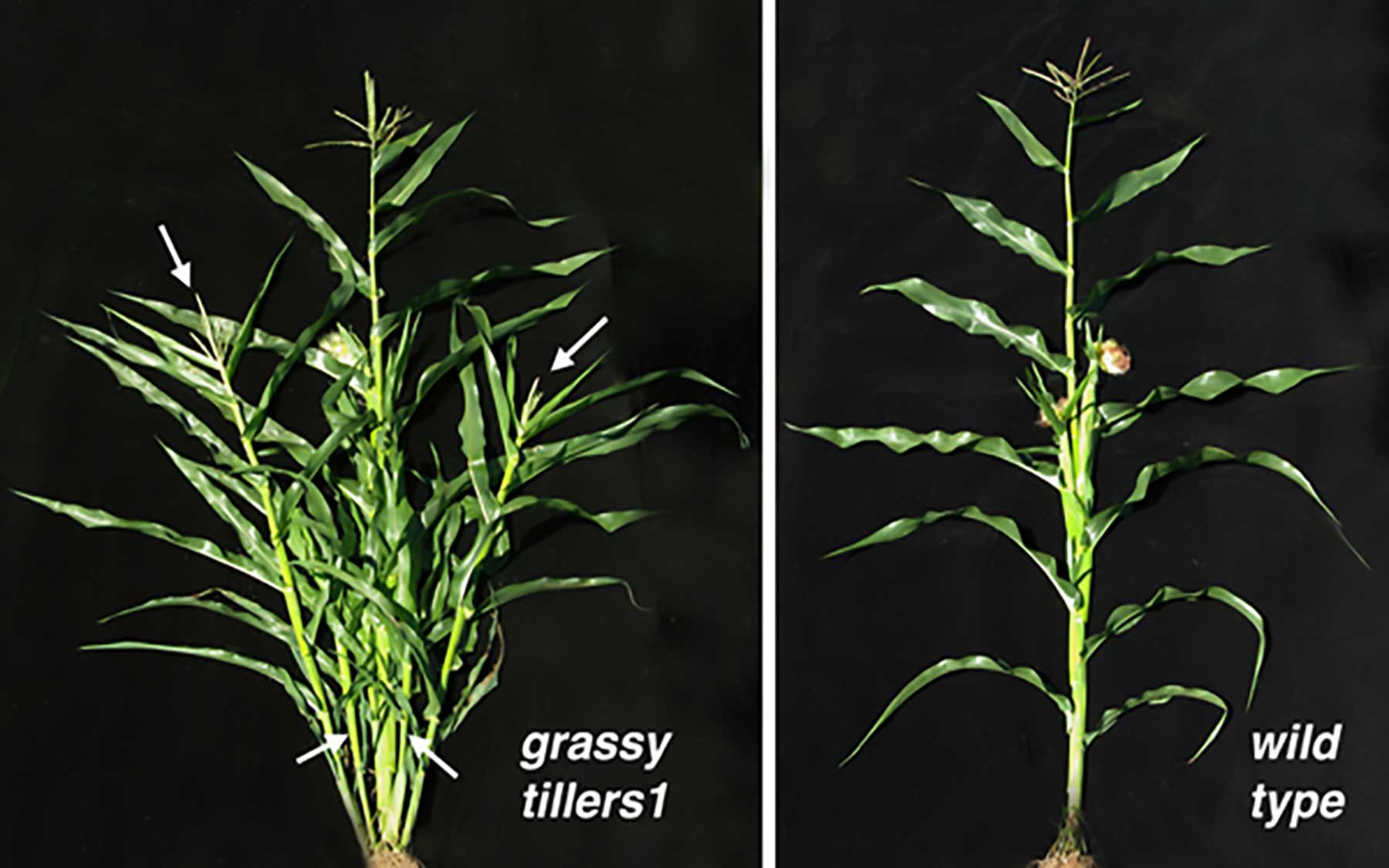 Cold Spring Harbor, NY — When an animal gets too hot or too cold, or feels pangs of hunger or thirst, it tends to relocate—to where it’s cooler or hotter, or to the nearest place where food or water can be found. But what about vegetative life?  What can a plant do under similar circumstances?

Plants can’t change the climate and they can’t uproot themselves to move to a more favorable spot. Yet they do respond successfully to changes in environmental conditions in diverse ways, many of which involve modifications of the way they grow and develop.

Plant biologists at Cold Spring Harbor Laboratory (CSHL) have now discovered at the genetic level how one species of grass plant responds to the challenge to growth posed by shade. Central to this work is the team’s identification of the role played by a gene called grassy tillers1, or gt1, whose expression, they confirmed, is controlled by light signaling.

The discovery of gt1’s role is full of implication, for it occurs in maize, one of the world’s most important food crops, and the genetic trick it performs, which results in changing the plant’s shape, suggests how maize’s ancestor in the grass family was domesticated by people in Mexico and Central America thousands of years ago. The discovery also suggests a present-day strategy for improving yield in switchgrass, a biofuel source.

In maize—or corn, as it is commonly referred to in North America—it has long been known at the level of effects, but not causes, how an unimpressive grass plant called teosinte was improved upon genetically through trial and error to become a prime source of food for the human race. As anyone who has seen a cornfield knows, modern maize plants grow in close proximity, in long rows, and tend to produce robust, branchless stalks which yield one or two large ears apiece.

“The domestication of maize from its wild ancestor teosinte resulted in a striking modification of the plant’s architecture, and this fact provided a starting point for our work,” says CSHL Professor David Jackson, who led the research team which also included scientists from Cornell University; the University of Wisconsin, Madison; North Carolina State University; the University of California, San Diego and Pioneer Hi-Bred. The team’s findings appear today online ahead of print in Proceedings of the National Academy of Sciences.

One can plainly see that maize plants produce very few lateral branches at their base.  The sparseness of tillers, as these branches are called by plant biologists, is the first clue: plants with many lateral branches don’t tend to grow well in close proximity, for their branches and leaves tend to throw any close neighbors into shade, thus limiting access to sunlight, their common prime energy source. By severely limiting its lateral branching, maize is able to redirect its energy to the primary shoot, which grows taller and escapes the shade.

“It is actually human selection that has done this,” explains Jackson. “Although maize plants produce tiller buds, the nascent branches fail to grow out, which results in the plant’s familiar dominant central stalk.” The team knew that maize plants in which gt1 is mutated generate several tillers and additional ear branches; this suggested that gt1 expression is normally associated with the suppression of tiller growth. This was confirmed in tests in which gt1 expression was measured in plants grown in the laboratory equivalent of shade.

Another maize gene called teosinte branched1, or tb1, is also known to regulate tiller bud growth and lateral branching in maize, and to be active in response to internal signals indicating the presence of shade. The next question was whether the two genes act in a common pathway, or separately. The expression of each was measured when the other was experimentally inactivated. “We found that gt1 doesn’t get activated unless tb1 is active; but that tb1 can act without gt1,” says Jackson. “Taken together, our experiments indicated that the two genes are indeed part of a common pathway, in which gt1 is downstream of tb1—it is not expressed until after tb1 is expressed.”

Knowing that ancestral teosinte is a highly branched and tillered plant, the team tested the hypothesis that it was the gt1 gene that was specifically (if unwittingly) selected by ancient agriculturalists in their trial-and-error attempts to domesticate a wild grass to produce a new source of food. By sequencing gt1 from diverse lines of modern maize and wild teosinte, “we obtained significant evidence that gt1 was selected during domestication,” according to Jackson.

“Tillering is an important trait in the grass family, and by modifying tiller production agriculturalists have increased yield in grasses such as maize and rice. Understanding the molecular mechanisms behind that modification may now provide us with a means to increase biomass production in switchgrass or other potential biofuel crops,” Jackson adds.

This research was supported by generous grants provided by the National Science Foundation and the US Department of Agriculture.