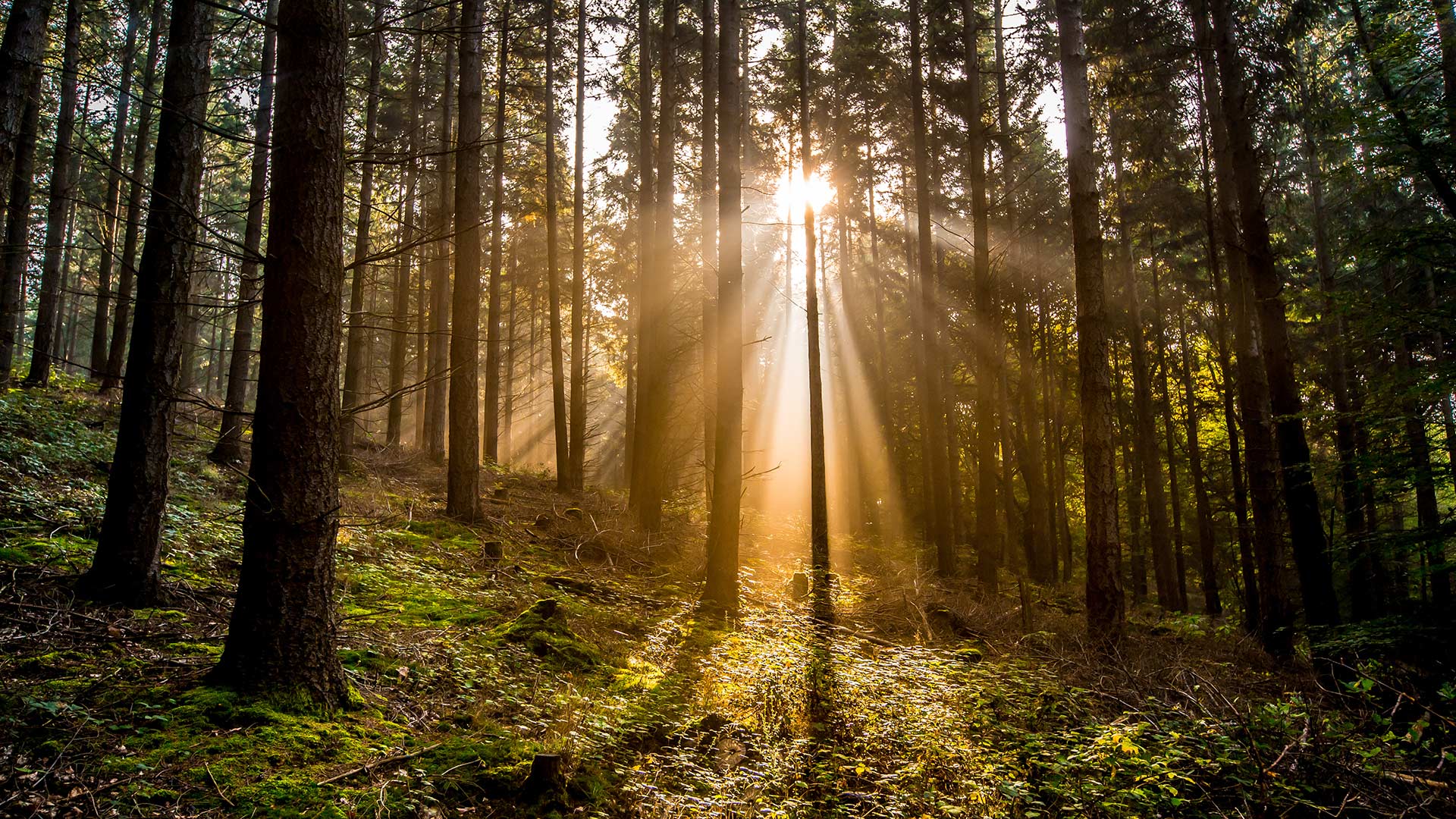 Trees and other plants compete for resources like sunlight and soil nutrients. A plant’s roots, shoots, and leaves communicate with each other to optimize a response to changing circumstances. As climate changes around the world, researchers hope to manipulate the genes used in plant communication to increase crop yields. Image: © mh90photo – stock.adobe.com

It’s 2050. The world population has increased by 2.3 billion to 9.9 billion. Demand for food has risen 70 to 100 percent but a warming planet, extreme weather, and a decrease in arable land is threatening food security. Luckily, farmers can grow crops more densely, increasing yield from smaller plots of available agricultural land. Packing crops so tightly wouldn’t have been possible three decades earlier. That’s because despite looking docile, plants are actually hypercompetitive. Grow two plants too close together and they start competing for resources like minerals, water, nutrients, and—once they start to shade one another—sunlight. Without adequate light, plants adapt rapidly through what’s called shade avoidance response (SAR). They reallocate energy into growing taller in an effort to harness sunlight, which results in stunted root growth and accelerated flowering time.

“This comes at a tremendous cost,” explains Ullas Pedmale, an assistant professor at Cold Spring Harbor Laboratory, where his lab studies the interactions of plants and the environment. “This change in energy basically leads to lower crop and biomass yield. The plant is now like, ‘Hey, I’m stressed, I’ve got very limited light, so let me make my offspring or seeds as soon as possible,’ because now the plant is thinking about its Darwinian evolutionary pressure to increase reproduction as soon as possible.”

CSHL Assistant Professor Ullas Pedmale discusses how plants sense the world around them.

Understanding SAR is especially important as major food crops—such as wheat, corn, potato, and tomato—are shade avoiders. But what if there was a way to grow plants densely without sacrificing yield? By learning about the genes involved in shade avoidance, Pedmale thinks he can shut down the plant’s state of distress, and perhaps engineer plants that can access sunlight and not panic into flowering early and stunting root growth thereby reducing their yield.

Pedmale has been researching how plants perceive and modify their architecture in response to light. Specifically, he is studying a group of proteins called cryptochromes—what he calls one of the eyes of the plant. Cryptochromes, the only group of receptors common among animals and plants, sense changes in the availability of blue light. A reduction in blue light or red light with an increase in far-red light indicates that a plant is in the shade, prompting it to switch on genes that, among other responses, stunt root growth. Understanding cryptochromes and their interplay with these genes could be an important aspect of mediating these responses and the key to growing crops at higher densities.

For more than 50 years, scientists have been studying how stems and leaves respond to being in the shade. Several years ago, Pedmale, who was originally looking into a plant’s above-ground architecture, realized that the roots are also an important aspect of SAR. As it turns out, when the shoots grow taller, the roots stop growing. Roots not only keep plants stable but also draw nutrition from the soil. Additionally, they are sources of food in crops like carrots and radishes.

Plant organs are divided into sources and sinks. Leaves, for example, whose main function is photosynthesis, are considered source organs: they provide and fix carbon. The carbon is then distributed throughout the plant. The roots are unable to fix their own carbon and are considered sink organs. “When a plant has enough resources, it can allocate resources into the storage, or sink, organ,” explains Christian Fankhauser, a professor of biology and medicine at the Center for Integrative Genomics, University of Lausanne. However, “if a plant wants to grow taller stems to take over the neighbors, it’s going to have to put more resources into the stem.”

This, Pedmale explains, becomes a vicious cycle as plants need a proper root system to support the shoot. “One recent aspect we’re studying is how the shoots communicate with the roots because roots are below ground,” he says. The roots can’t see sunlight but it’s clear the shoots are relaying that message to the roots. Researchers want to understand what is happening so they can block that signal from traveling to the roots, allowing the roots to do their job and in turn letting the shoots perform their functions and deliver the needed crops, Pedmale adds.

The plant is now like, ‘Hey, I’m stressed, I’ve got very limited light, so let me make my offspring or seeds as soon as possible’”

Further, a weak root system can be detrimental to crops, as roots are acting as a physical anchor and keeping plants secure. “It makes (plants) more vulnerable because if you have too much wind and they fall over, they actually are not going to be harvestable,” Fankhauser says.

Pedmale is trying to figure out what signals lead to stunted roots. His team compared the seedling roots of tomato and Arabidopsis—the lab rat of plants—grown in light, to the less developed roots of seedlings grown in the shade. They discovered that hundreds of genes plants use to respond to stress were switched on in the shade-grown plants, including dozens that encode proteins called WRKYs and regulate gene expression. To confirm those genes were responsible for the stunted roots, they engineered plants so that specific WRKY genes stayed highly active even in full sunlight. They found that the roots were stunted, similar to shade-grown plants.

“So now we have a proof of concept,” says Pedmale. He believes that perhaps selectively disabling the genes that push plants into the shade-avoiding mode could change their reaction so the roots can keep growing.

Using gene editing methods like CRISPR/Cas9, the researchers can interrupt or inactivate a gene by making a very precise cleavage in the genome. They can also reprogram gene expression by applying certain chemicals, like a type of steroid, to the plants. In this way, they can figure out exactly what works to help shade avoiders overcome their state of distress when they sense a reduction in blue and red light. CRISPR, in fact, is not unlike natural evolution—just much, much faster. With CRISPR, scientists can influence the direction of evolution, enhancing good traits and weeding out those that aren’t beneficial.

At the moment, Pedmale can’t estimate a timeline of when the results of this work could be scaled up and used in agriculture. “It’s hard to pin down, because (there are) so many things I can see go wrong,” he says. “For example, it’s possible that a gene responsible for shade avoidance response also performs other functions, (like) defending against pathogens.” Knocking that gene out, therefore, might cause other issues.

Another obstacle—and one that Fankhauser thinks is a major one—is public acceptance and related policies, as many people remain afraid of certain types of technologies when it comes to their food. Never mind that gene editing of the food supply goes back for millennia.

“It takes all this talking to people to try to convince them that we are not trying to be Dr. Frankenstein,” said Fankhauser, who noted we’ve been modifying the genome of animals and plants to fit our needs for the last 10,000 years. “Obviously, for the first 9,950 years or so, we had no idea about the genetic underpinnings of this enterprise: it was all kind of a random process. But now we do understand the genetic underpinnings (and) we can actually intervene in a much more directed, precise, way.”

Pedmale believes his research can have far-reaching implications: “I feel that any progress we make in this area has the ability to touch everyone on planet Earth, because everyone has to eat.”