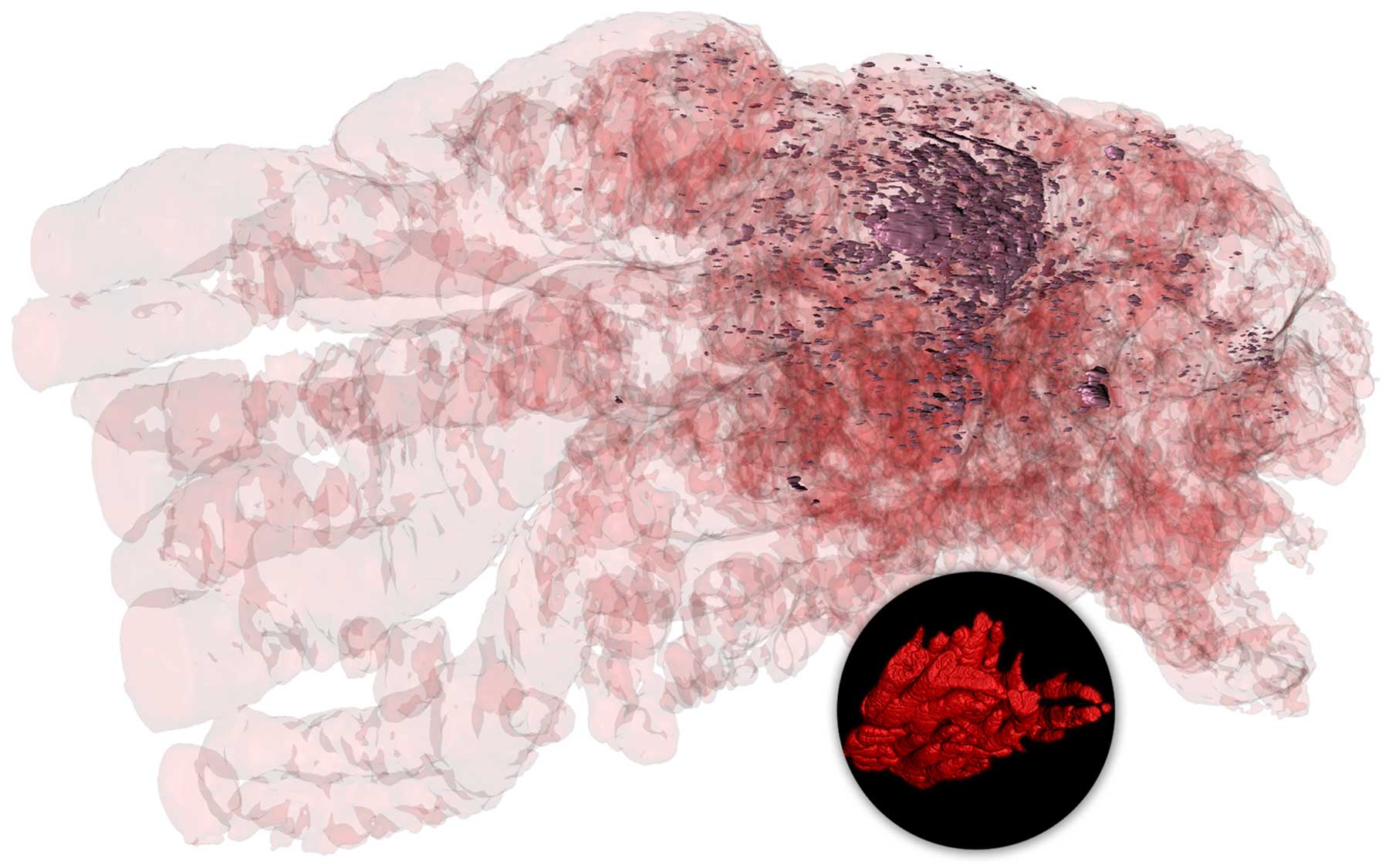 Experts have long known that tumors arise from the migration of cancer cells across organs. But observing the progression of those cancer cells in high resolution, and in turn being able to more effectively hinder their advances, has been a challenge for scientists. Now, a cutting-edge technique originally developed by Associate Professor Pavel Osten’s lab to image the mammalian brain has been adapted by postdoc Julian Taranda of Osten’s team and his CSHL colleagues in Professor Lloyd Trotman’s lab, in order to peek at prostate cancer cell migration in mice. The scientists have created a remarkably detailed 3D model of the tiny mouse prostate, allowing them to better observe cancer progression, with implications for effectively treating the disease in both mice and humans.

The imaging technique is called serial two-photon tomography (STPT). The two labs have used it to not only map in unprecedented detail the dense and complex structure that is a mouse prostate (inset image above, bottom right) but also to reveal the progression of the cancerous cells acting within (main image above).

In this main image, you can see straight through an entire mouse prostate, thanks to the careful layering of some 240 images. For each image, two powerful beams of light (the “two photons”) were used to peer through a surgically sectioned slice of the mouse prostate, looking for luminal markers they had been specifically tuned to recognize. The photons are not powerful enough to penetrate an entire prostate at once, but when all the images of separate sections are combined, researchers essentially “rebuild” the prostate, achieving an unimpeded look through the whole organ.

Using 3D imaging software, the researchers are able to visualize the progression of cancer (orange) in a section of the prostate. The “island” of cancer cells on the far left are pioneers from the larger tumor (right). (Image courtesy of Trotman Lab, CSHL)

One marker called tdTomato (main image, in red) shows where the production of proteins PTEN and p53 have been halted by the cancer. This protein pair works together to suppress cancer, and their deletion is a strong sign of a cancer reworking the cellular landscape to accommodate for its progression. Thus, particularly deep red-colored areas in this 3D model indicate regions of the prostate that have been compromised.

By studying compromised prostates at two different stages of disease progression—ten days and 20 days following disease onset—researchers have been able to study with more precision how cancer cells (here, the visible dark dots) migrate throughout the organ, leaving havoc in their wake. Their work may lead to better treatments for the disease.

The prostate cancer cell that got away

Like finding a needle in a haystack, CSHL scientists can now track prostate cancer in mice from its single cell start and as it spreads.   Read more »

No (real) moustache required to join the “Movember” party