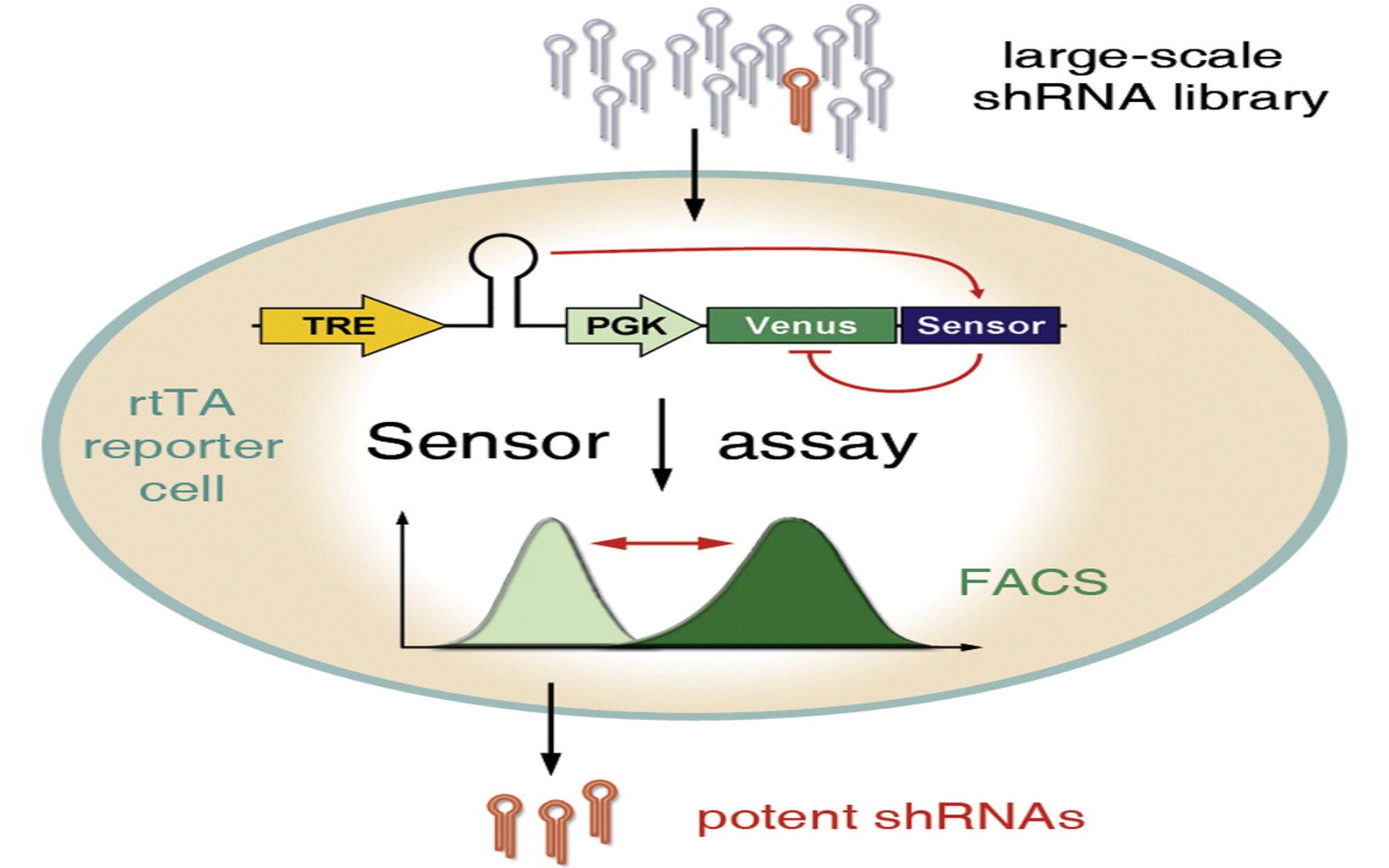 Cold Spring Harbor, NY — A research team led by scientists at Cold Spring Harbor Laboratory (CSHL) has developed a powerful method that allows them to sift through thousands of candidate hairpin-shaped RNA molecules at a time and pull out only those RNAs that potently shut down the activity of a target gene. This accomplishment will now allow biologists to fully exploit RNA interference (RNAi), a natural cellular mechanism that has already been co-opted by scientists for myriad purposes such as hunting for cancer genes, stopping viral infections and more recently, treating diseases in clinical trials.

RNAi is a powerful tool that in theory can be used to knock down any gene of interest but has been difficult to implement in practice,” says CSHL Professor and Howard Hughes Medical Institute (HHMI) Investigator Scott Lowe, Ph.D., who co-led the team with Gregory Hannon, Ph.D., also a CSHL Professor and HHMI investigator. One major challenge has been the difficulty of finding the correct molecular trigger for RNAi. The trigger is a tiny piece of RNA, which, by attaching to a matching piece of the target gene’s RNA, spurs its destruction, thereby shutting down the production of protein from that gene.

“For every gene, depending on the size of its protein-coding RNA, there are potentially 500 to 5000 different small RNAs that can trigger RNAi,” explains Hannon. Most of these are weak triggers that do not shut down gene activity completely or end up targeting a different gene resulting in so-called “off-target” effects. Either scenario can ruin experiments that use RNAi to study diseases in the lab, or worse, lead to useless, or even toxic, treatments in the clinic. “Picking the right trigger has been like trying to pull a needle out of a haystack,” Lowe says.

In a paper that appears online on February 24 in the journal Molecular Cell, scientists from the Lowe and Hannon laboratories and their collaborators, including Professor and HHMI investigator Stephen Elledge, Ph.D., of Harvard Medical School, explain how they succeeded in solving this problem. Based on an idea by Hannon, a pioneer in RNAi technology, and using molecular tools developed in the Lowe laboratory, the team designed an assay that tests thousands of short hairpin RNA (shRNA) molecules at a time for their ability to shut down genes of interest in cells and identifies the most potent RNAi triggers.

In a pilot experiment to find the most potent RNAi triggers for nine target genes—including a few hard-to-suppress cancer genes—the team generated genetic codes for about 20,000 shRNAs, each with the potential to shut down any one of the nine target genes. Each genetic code was then inserted into a retrovirus that was also engineered to carry the target gene—or the “sensor”—and a gene for a fluorescent protein called a “marker.” This design ensured that when cells growing in dishes were infected with the genetically engineered viruses, both the sensor and the marker would always be co-produced within each cell along with one shRNA.

“All we had to do then was to sort these cells out, pull out each cell’s genetic material and sequence the short hairpin RNA,” explains graduate student Christof Fellmann, who together with post-doctoral fellow Johannes Zuber led these efforts. “This gave us the identity of the RNAi trigger that was most potent in shutting down the target gene.”

The team found that for each of the nine genes, only about 2.5% of all possible shRNAs against that gene could shut down its activity efficiently. The success of their approach also means that scientists might no longer have to rely on current algorithms that are often not accurate in predicting which shRNA would work best at shutting down any given gene.

“There is still very little that is known about small RNA biogenesis,” says Hannon. “But this assay has now allowed us to explore this process at a scale that wasn’t feasible before.” The scientists’ analysis of the 20,000 small hairpin RNAs, and especially those recovered from cells in which the target gene had been efficiently shut off has revealed new insights into this process and drastically improved the recipe for creating a potent RNAi trigger. “Our assay has given us a strong framework for rational design of small hairpin RNAs,” says Lowe.

This work was supported by program project grants from the National Cancer Institute and generous gifts from the Don Monti Memorial Research Foundation.