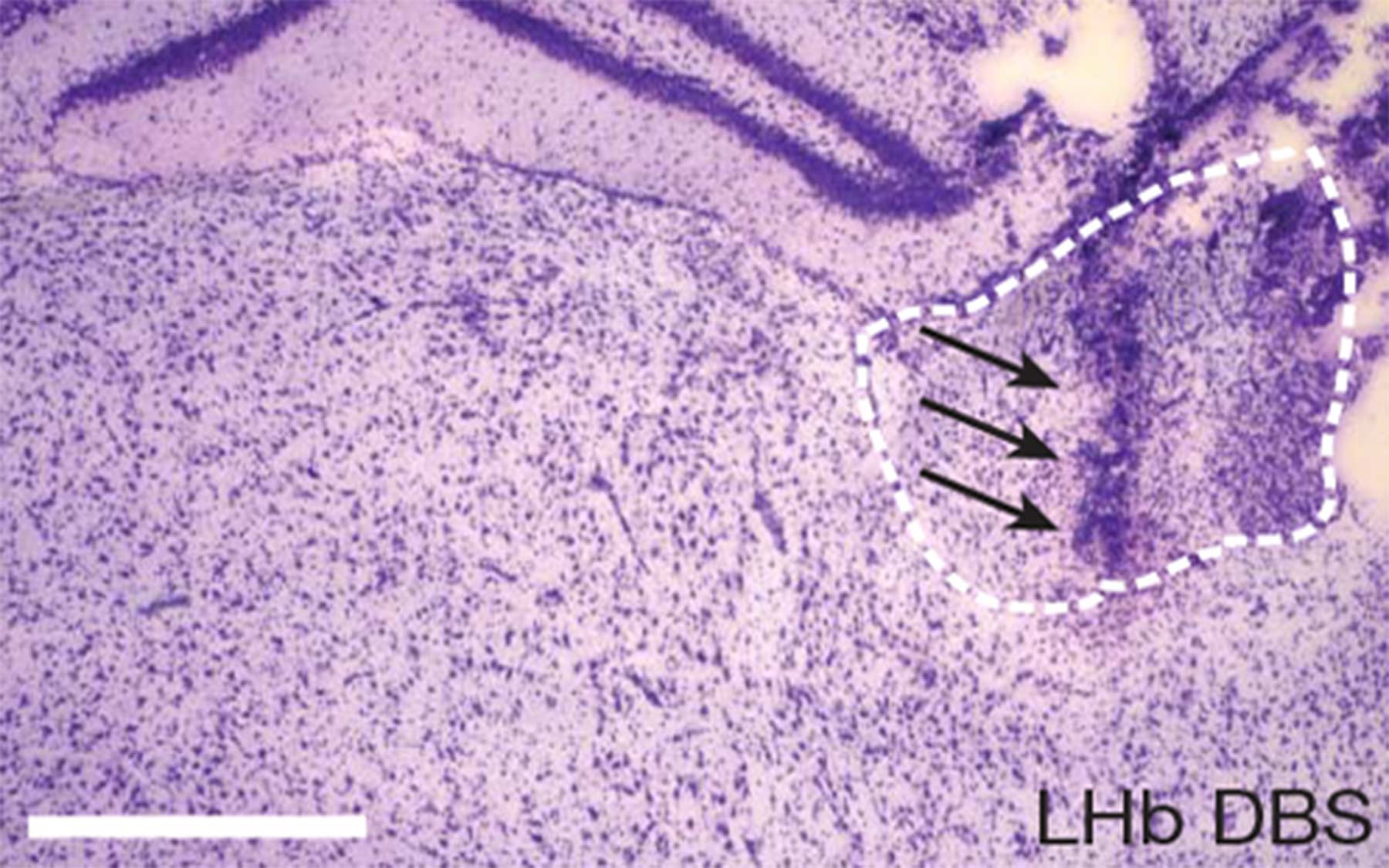 By implanting electrodes (location shown by arrows) into a tiny area of the rat brain called the lateral habenula (LHb), outlined in white dashes, scientists were able to deliver an analog of Deep Brain Stimulation (DBS). This had the effect of reversing depression-like symptoms in the rats.
email envelop icontwitter icon share buttonfacebook icon share buttonlinkedin icon share button

The lateral habenula is hyperactive in rat models of human depression

Cold Spring Harbor, NY — A team of neuroscientists at Cold Spring Harbor Laboratory (CSHL), Brookhaven National Laboratory (BNL) and UC San Diego (UCSD) has collected evidence suggesting that a previously overlooked portion of the brain could be a prime locus of human depression.

In two rat models of human depression, the scientists have demonstrated that neurons in a tiny area in the central brain called the lateral habenula (LHb) are hyperactive.

Specifically, as the team reports today online ahead of print in the journal Nature, excitatory synaptic inputs onto neurons in the LHb are enhanced in “depressed” animals, a finding they regard significant because this excitation in turn causes the inhibition of “downstream targets”—including neurons in a part of the brain called the ventral tegmental area (VTA), important in the brain’s reward system and heavily populated by dopamine neurons.

Furthermore, the team, which includes Professor Fritz Henn of CSHL and BNL and Assistant Professor Bo Li of CSHL, as well as Professor Roberto Malinow of UCSD and formerly of CSHL, was able to use an analog of deep brain stimulation (DBS), a novel form of electrical stimulation involving the implantation of electrodes into a specific brain area, to reverse depression-like symptoms in the rats.

DBS is an important new experimental modality of treatment for refractory depression in people, as well as a potentially important approach to treat other neurophysiological disorders, most notably Parkinson’s disease. The team’s results point to the LHb as a potential therapeutic target for DBS. A series of ongoing experiments in depression at other laboratories, which have shown promise in a small number of human patients, have used DBS to target an area of the cingulate cortex called Brodman’s Area 25. Henn and colleagues in Germany last year reported success in treating one case of intractable human depression with DBS, targeting the LHb.

The animal models used in the team’s rat experiments displayed a behavior called learned helplessness. The rats were stressed in ways that were unpredictable and inescapable; over time, they developed depression-like symptoms, notably a lack of motivation to evade unpleasant stress. “It’s not a perfect model of human depression by any means,” says Li, “but it is very valuable, for it does enable us to study the neural mechanisms of certain aspects of depression in people.”

The team’s most important decision was to study the lateral habenula. “This is an area of the brain that has often been overlooked, perhaps because of its size.” Li noted, “It covers an area only about 1-2 mm across.” So far only two brain imaging studies have implicated the LHb in depression because of the difficulty in resolving it using existing technologies such as PET and fMRI.

Dr. Henn, a pioneer in using learned helplessness to study depression, persuaded the team to focus on the LHb, a structure whose potential role in depression intrigued him because the LHb has elevated metabolic activity in the congenital learned helplessness model developed in his lab. The team hypothesizes that the therapeutic effect of DBS on hyperactivity in the LHb is due to the silencing effect of the high-frequency electrical pulses delivered by the implanted electrodes.

Further study of this and more broadly the mechanism behind LHb-related dysfunction is the team’s most immediate priority. The rodent medial prefrontal cortex, the counterpart of Brodman’s Area 25 in humans, which has already been demonstrated to be implicated in at least a subset of human depression, is one of several brain areas that send axonal projections to the habenula, Li notes. “In theory, it could be the source of the ‘driving force’ that makes neurons in the LHb overexcited.”

“Our next important goal is to define the source of the overactivity, which appears to be due to increased glutamatergic activity,” Henn states. Another priority, he says, is to better understand the mechanism of DBS in the habenula. “By applying DBS in the habenula, you’re affecting the entire structure, and its entire population of neurons. We want to know which elements are critical in mediating the behavioral effect—the relief of “depressed” symptoms—that we have observed,” Henn says.

The habenula projects not only to the VTA, but to other areas such as the Raphe nuclei, which produce serotonin, another neurotransmitter implicated in depression and which may control noradrenaline output in the brain as well. The team wants to know how the lateral habenula coordinates the activity of all three—dopamine, serotonin and noradrenaline—to fully understand the LHb’s role in depression. Li says he intends to use highly specific methods including optogenetics to dissect different pathways of interest in the model.

A unique iPhone app called the 3D Brain, developed by CSHL’s DNA Learning Center, may be of interest to readers of this story.

“Synaptic potentiation onto habenula neurons in the learned helplessness model of depression” was published online ahead of print in Nature February 24, 2011.  The authors are: B. Li, J. Piriz, M. Mirrione, C. Chung, C. Prolux, D. Schulz, F. Henn, and R. Malinow.  The paper can be found online at www.nature.org.