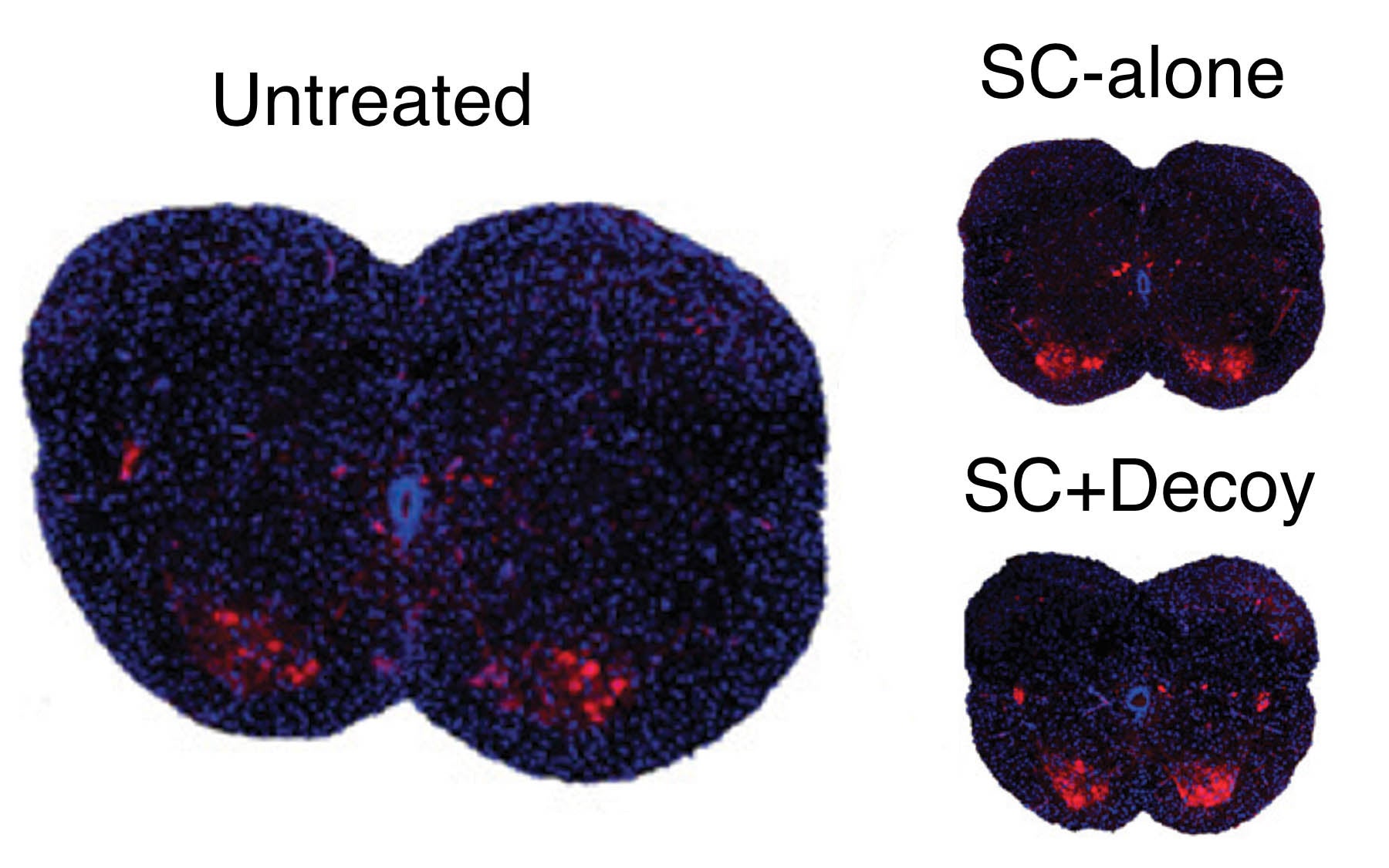 CSHL researchers have discovered that a drug to treat SMA in mouse models is effective even when injected subcutaneously, and it is not necessary in the central nervous system. Shown here are spinal sections from three different mice with SMA. Systemic drug treatment (middle panel) increases the presence of motor neurons (red spots) over the untreated mice (left panel). Surprisingly, the results are very similar when treatment is excluded from the CNS (right panel), suggesting a possible new path for SMA drug treatment.
email envelop icontwitter icon share buttonfacebook icon share buttonlinkedin icon share button

Cold Spring Harbor, NY — Today, a team of researchers from Cold Spring Harbor Laboratory (CSHL) sheds new light on the underlying pathology of spinal muscular atrophy (SMA), a rare but devastating disease that causes muscle weakness and paralysis and is the leading genetic cause of infant deaths. The newly obtained insights may prove valuable as scientists currently work to define optimal treatment strategies for patients.

SMA is a motor neuron disease, meaning that it leads to the degeneration of nerves that control muscles and voluntary movement. These neurons require a protein known as Survival of Motor Neuron (SMN). Normally, all cells contain the instructions for two variants of the protein, called SMN1 and SMN2. In healthy patients, SMN1 is abundant, while SMN2, due to a quirk of molecular editing, is produced primarily in a shortened, unstable form.

In patients with SMA, however, the instructions to produce SMN1 are faulty and cells no longer generate the protein. Therefore, cells are forced to rely on small amounts of full-length SMN2 protein that are produced alongside the shorter, nonfunctional version.

CSHL Professor Adrian Krainer, in collaboration with Ionis Pharmaceuticals, has developed a drug that allows the correct editing to occur, thereby greatly increasing the amount of functional SMN2 protein in neurons. The drug, known as an antisense oligonucleotide (ASO), showed great promise in preclinical mouse models of SMA. It is now in Phase 3 clinical trials in SMA patients.

The drug is delivered directly into the cerebrospinal fluid of infants and children with SMA. “It is largely believed in our field that SMN is essential in the central nervous system (CNS)—not in peripheral tissues like the limbs or liver—so most efforts have been focused on increasing full-length SMN levels in the CNS,” explains Krainer. “But over the last few years, evidence has been building that challenges our assumptions about the pathology of the disease. The question is: do we need to increase SMN levels in the CNS, in peripheral tissues, or both?”

In their new work, reported today in Genes & Development, the researchers developed a method to restore SMN production only in peripheral tissues, allowing them to define the role of the drug both inside and outside of the CNS. The team treated well-established mouse models of SMA with the ASO subcutaneously. Consistent with previous results, the drug increased SMN levels in both the CNS and peripheral tissues; in newborn mice, but not in older mice, some of the drug injected in the periphery can reach the CNS. The treatment effectively cured the animals.

The team then injected a “decoy” oligonucleotide into the CNS, along with the subcutaneous injection of the SMA ASO. “Our decoy was thus able to inactivate the drug only in the CNS,” explains Krainer. “Full-length SMN2 was still produced in peripheral tissues, but there was no increase in SMN2 made in the CNS, where we expected it to be important.” But the results were striking and unanticipated. “We were amazed to find that our decoy had absolutely no effect on motor neurons or recovery. Contrary to our initial assumptions, increasing SMN levels in the CNS is not essential to rescue the SMA phenotypes in these mouse models of the disease.”

The work has implications as researchers and clinicians work to develop optimal treatment strategies for SMA. “Already, our ASO is showing great potential in the clinic,” says Krainer. “There is a possibility that modifying the way the drug is administered may produce even better outcomes; alternatively, our observations may reflect unique idiosyncrasies of the mouse models, but even then it will be important to understand the underlying mechanisms.”

This work was supported by the US National Institutes of Health, the St. Giles Foundation and Cold Spring Harbor Laboratory, as well as a Cancer Center Support Grant to CSHL and the National Natural Science Foundation of China.