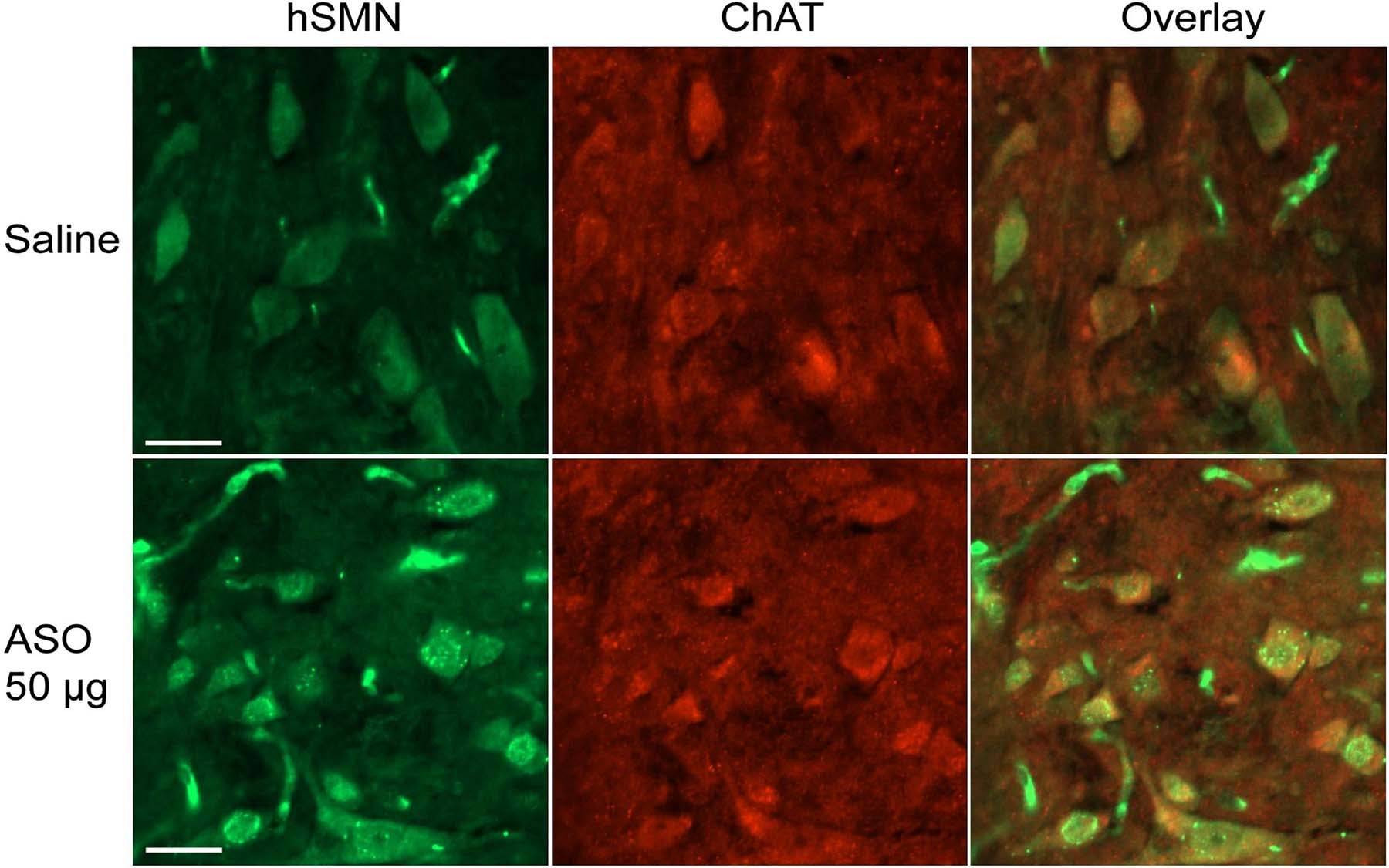 Scientists at Cold Spring Harbor Laboratory (CSHL) and California-based Ionis Pharmaceuticals have succeeded in reversing symptoms of Type III SMA, a relatively mild form of the disease, in mice by introducing an ASO into their spinal cords. The ASO fixes the molecular mistake underlying SMA by redirecting a cellular editing process called alternative splicing.

“Validating ASO efficacy in animal models is a crucial pre-clinical step before this strategy can be applied in SMA patients,” says CSHL Professor Adrian Krainer, Ph.D. “We have now successfully demonstrated this therapeutic efficacy in the mouse nervous system. Although the mice only have the mild symptoms of Type III SMA, our treatment can effectively correct them.”

Based in part on the team’s findings, which appear online ahead of print on July 12th in Genes and Development, Ionis selected an antisense drug candidate to move forward in development to treat SMA.

“SMA is the leading genetic cause of infant mortality and has limited treatment options for patients.  With Dr. Krainer’s lab at Cold Spring Harbor Laboratory, we have made significant progress in identifying a drug development candidate and conducting early preclinical studies to access its therapeutic potential,” said Frank Bennett, Ph.D., Senior Vice President of Research at Ionis Pharmaceuticals.  “We are committed to advancing this program toward the clinic.”

SMA is caused by insufficient levels of a protein called Survival of Motor Neuron (SMN) in the spinal cord’s motor neurons, which waste away along with the muscles that they can no longer control. The SMN1 gene, which produces the SMN protein, is missing or mutated beyond repair in SMA patients. Humans have a second SMN-producing gene called SMN2, but this gene is a poor backup, as it produces very little functional SMN protein. This deficiency stems from a mistake that occurs during splicing, a molecular editing process that kicks in after the gene’s DNA has been copied into RNA.

Normally, newly copied RNA molecules are edited, or spliced, to produce a functional blueprint for protein production. Cellular machinery called the spliceosome cuts out unnecessary bits of RNA called introns and splices together the remaining essential bits called exons. In the case of the SMN2 gene, however, the splicing complex mistakenly skips an exon.

“Coaxing a patient’s cells into efficiently including this exon, instead of skipping it, is expected to decrease the severity of SMA symptoms,” explains Krainer. “Our strategy to enhance exon inclusion was to disrupt or mask ‘splicing silencers’—regions of RNA in or around the exon that impair its recognition by the cell’s splicing machinery, and thereby promote its skipping.”

Several years ago, Krainer’s team and their collaborators at Ionis designed and tested synthetic molecules, the ASOs, which can be programmed to bind to any piece of RNA according to this target RNA’s sequence of nucleotides or “letters” of its genetic code. By comparing hundreds of ASOs that targeted various regions in or near the skipped exon in the SMN2 RNA, the team zeroed in on one ASO that optimally enhanced exon inclusion and production of functional SMN protein.

“We first showed that this ASO corrected SMN2 splicing in the test tube, and in patients’ cells grown in the lab,” says CSHL Research Investigator Yimin Hua, Ph.D., who spearheaded this work in Krainer’s lab. In 2008, the team injected these ASO molecules into the bloodstream of mice engineered to carry a human SMN2 gene that display symptoms of type III SMA. This regimen corrected SMN2 splicing in the animals’ liver and kidneys but not in spinal cord neurons-where they are most neededâ€”because the ASOs failed to breach the blood-brain barrier and enter the spinal cord.

The collaborators have now overcome this limitation by directly delivering ASOs into the animals’ central nervous system, a common route of administration for other drugs such as chemotherapy agents. Infusing ASOs into the fluid that surrounds the brain and spinal cord resulted in a robust increase in the levels of SMN protein in individual motor neurons throughout the spinal cord of type III SMA mice.

“This effect persisted for half a year after the treatment ended, indicating that the ASO is extremely stable,” explains Krainer. “And equally importantly, none of the ASO doses tested triggered toxicity or inflammation in any of the mice tested.”

Mice with type III SMA typically develop necrosis-the death of cells and destruction of tissue-in adulthood. Although they do not display muscle weakness, these animals begin to lose their tail and ears 3-4 weeks after they are born, with complete loss occurring within a few more weeks. To test the ability of the ASOs to prevent these symptoms, which resemble clinical features observed in some infants with the more severe type I SMA, the team treated neonatal mice or 15-day-old mouse embryos with a single ASO injection.

This treatment prevented both tail and ear necrosis in the neonates and embryos, which developed into adults with normal tails and ears. The researchers suggest that supplying the therapeutic ASO to the animals’ central nervous system, which restored cellular SMN protein levels, might in turn prevent neuronal deterioration, muscle wasting, and vascular problems in the tail and ears.

The collaborators’ work was generously supported by the Muscular Dystrophy Association.

“Antisense correction of SMN2 splicing in the CNS rescues necrosis in a Type III SMA mouse model,” will appear online, ahead of print in Genes and Development on July 12th. The full citation is: Yimin Hua, Kentaro Sahashi, Gene Hung, Frank Rigo, Marco A. Passini, C. Frank Bennett, and Adrian R. Krainer. The paper is available online at http://genesdev.cshlp.org/content/early/2010/07/09/gad.1941310.abstract

Professor Adrian Krainer is the 2020 Senior Scientist Winner of the Innovators in Science Award for his work on SPINRAZA®.   Read more »