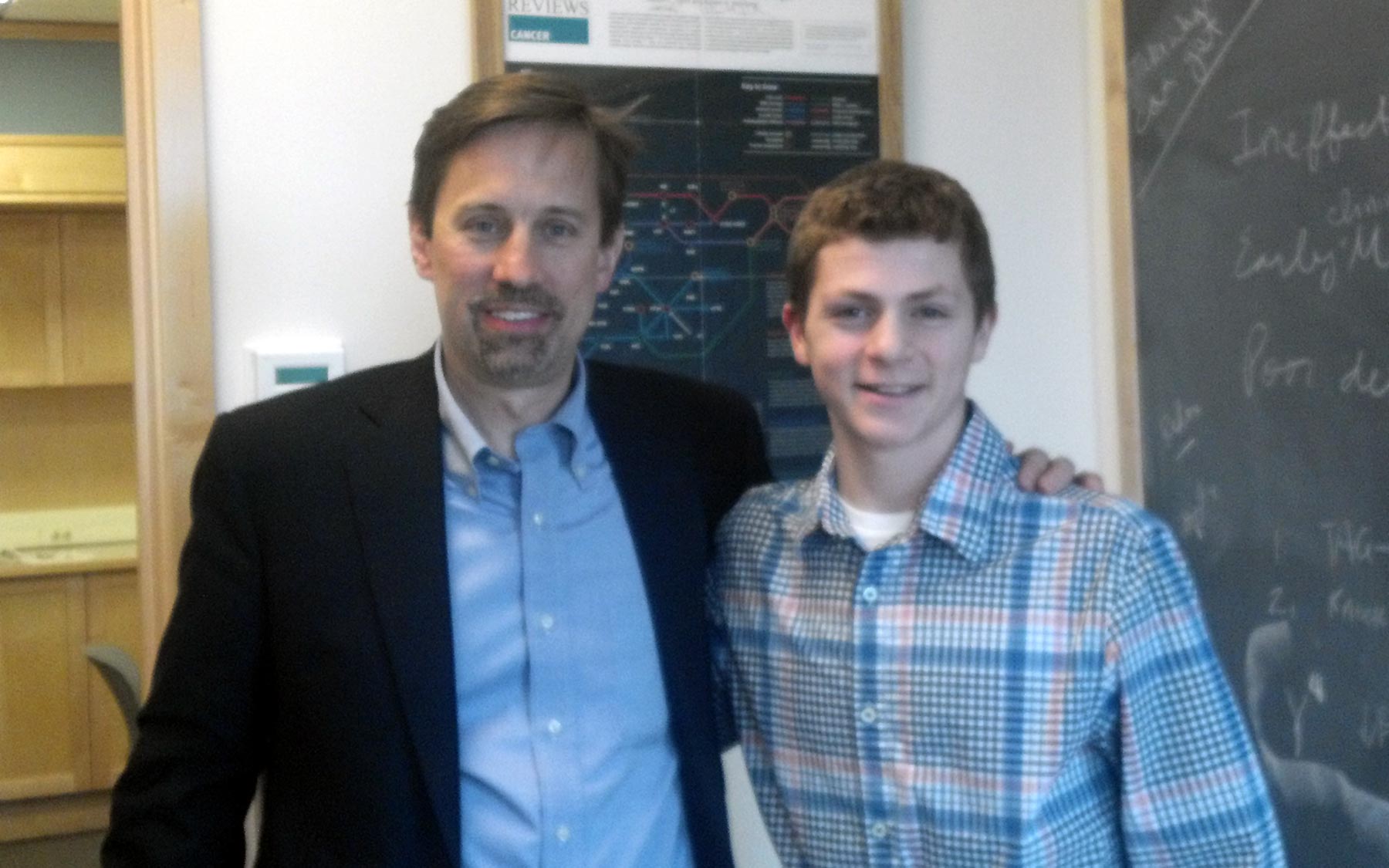 CSHL Professor David Tuveson and Skyler Palatinick
email envelop icontwitter icon share buttonfacebook icon share buttonlinkedin icon share button
Of all the things kids and teens think about when the topic of scientists comes up, the last thing you would expect to hear is that they are normal—but from my experience at Cold Spring Harbor Laboratory, I can tell you they are. Thirty minutes with one of the most renowned cancer researchers in the world, Dr. David Tuveson, and my view on everything in the science department was changed. Not only did he have a warm and friendly personality, but he had devotion to his cause that could be compared to that of any of the greatest athletes and politicians.

Researchers such as Dr. Tuveson have a very distinct job. As he says, they “live on a limb.” This means that their goal is to draw new conclusions and work toward proving them right. Once these problems, as Dr. Tuveson calls them, are solved, the researcher moves on to another problem, or in other words, he makes another prediction and works towards proving that one right. In this way a scientist’s work is never done.

Since Dr. Tuveson is the Deputy Director of the Lab’s Cancer Center, I asked him what he thought about claims that cancer research isn’t making enough progress. He explained that pancreatic cancer, one of the most deadly of all cancers and the specific cancer that he researches, is a “pretty rugged opponent.” He said that after much hard work researchers have now reached a point where they are just “outside of the gates” and making progress building the rights kinds of weapons to break through and defeat this disease.

Pancreatic cancer is such a tough disease because it’s hard to detect it early; it is highly metastatic which means it spreads to other parts of the body quickly; and it is resistant to typical therapies like chemotherapy and radiation that are used by doctors successfully in other types of cancer.

Dr. Tuveson told me that there are also certain mutations in our cells that react when exposed to harmful substances like tobacco and thus lead to cancer. According to Dr. Tuveson, researchers are progressing in getting a better understanding of which substances or other environmental factors will “push your body over the edge” and lead to cancer.

Many people remain pessimistic about the future when it comes to incurable cancers, but not Dr. Tuveson. In working on pancreatic cancer, he has picked one of the most lethal forms of cancer to research, but he has so much hope.

He finds hope in scientific breakthroughs and is also inspired by patients who he has treated. “I envision a day when we’ll be able to tell healthy people that they have an early cancer coming and that we are going to catch it before it makes you sick,” said Dr. Tuveson.

According to Dr. Tuveson there are quite a few good clues that are helping guide cancer research today. While no specific ethnic group or gender tends to get pancreatic cancer more predominantly than others, Dr. Tuveson said that it actually runs in families who possess mutations in one or more associated genes [such as BRCA2, LKB1, P16, or PRSS1—Editor]. He also said that while scientists don’t know much about the relationship between pancreatic cancer and other pancreas disorders, he is sure that there is a link.

When Dr. Tuveson isn’t busy with cancer research he is with his family and out enjoying hobbies such as boating in the spring and summer.

It is pretty challenging to be consumed completely by your work when you have a family, but he and his colleagues seem to find time for everything, including having fun. Just after I finished my interview, I heard from one of the lab workers that many of the researchers were out that day skiing. I also heard that the researchers take days off for enjoyable activities every few weeks.

My time with Dr. Tuveson completely changed my view on scientists and cancer all together.

Skyler Palatnick is a freshman at Cold Spring Harbor High School. He has done volunteer work in the Development department at CSHL, as well as with many other local service organizations. His interest in science is longstanding, having represented West Side Elementary school at several science fair competitions, and is currently conducting a High School research project on the impact of energy drinks on reaction time.