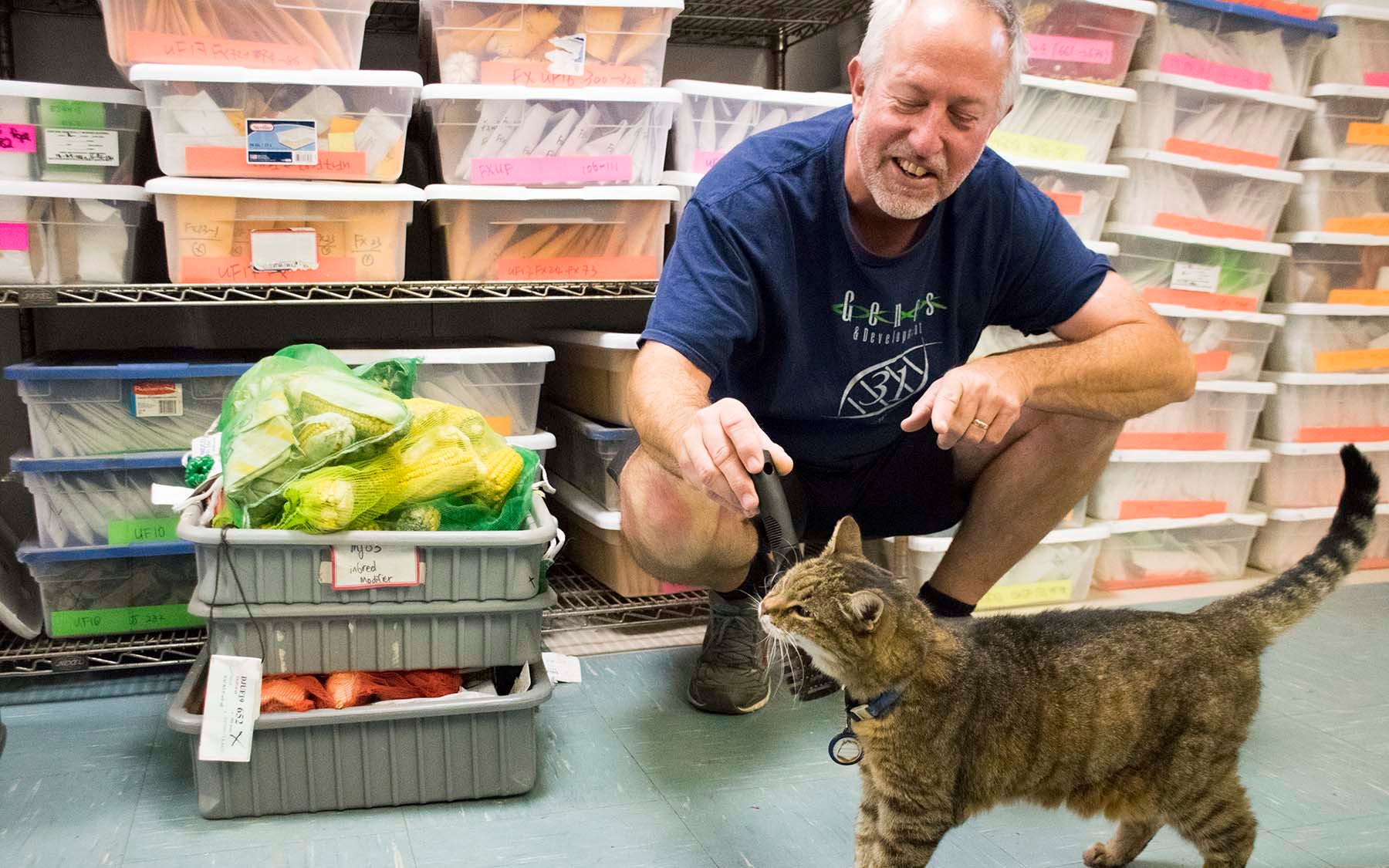 A small cat stands guard outside the door, sitting with her eyes half-closed on the sun-soaked grass. “This is Sam,” said Tim Mulligan, senior farm manager at CSHL, bending down to pet her.

The seeds Sam guards are one-of-a-kind, born from plants that have had their traits carefully tweaked by CSHL plant scientists and cultivated over several years. It could take up to four seasons before scientists get the right seeds with the right genetics.

Mulligan has been working at Uplands for 33 years, providing general plant care for the Lab’s scientists. For the last 25 years, a string of cats have helped him patrol the farm. Fester was the first hired for the role of “rodent surveillance” in the late ‘90s. In the 2000s, Tom replaced him. Sam stepped into the role about 12 years ago.

“Before there were cats, the mice and rats would get into everything, especially the stored grain,” Mulligan said. “They would chew through the boxes and eat all the seeds.”

Introducing the cats as a natural pest deterrent immediately helped the rodent problem. They’re even on the lab’s payroll, since the farm covers their vet bills.

Sam also sports a microchipped collar that grants her access to the seed room. The extra security layer was added after a raccoon had snuck in through the cat door.

Sam is busiest during the winter season, after the last harvest, when rats and mice are looking for food and shelter.

Harvest is a coordinated affair with all hands available from each lab. The seeds are collected from maize, sorghum, teosinte (a Mexican grass) and tomato. All seeds are genotyped for the specific genetics scientists are looking for. The ones without desired genes are discarded.

Some of the seeds get planted in the greenhouse. The remaining are put into labeled envelopes and packed into plastic containers. “The seeds are stored in perpetuity because you never know when you may need that specific genomic background,” Mulligan said.

Sam might be well-known around the farm, but Fester, her predecessor made an impression beyond CSHL. “Joe Colasanti, one of the scientists back in the 90s, was propping these maize plants up against the greenhouse to take a picture of them,” Mulligan said. “Fester, without anyone knowing, just walked in while the picture was being taken!”

It was only when Colasanti was adding figures to the report that he noticed the photobomb. He was worried about a mammal appearing in a study about plants. But the journal actually liked the addition, and the manuscript was accepted and published by Cell in 1998.

Mulligan figures Sam is about 12 years old and close to retirement. He hasn’t thought about a replacement, but promises that Uplands Farm will always have a good cat.