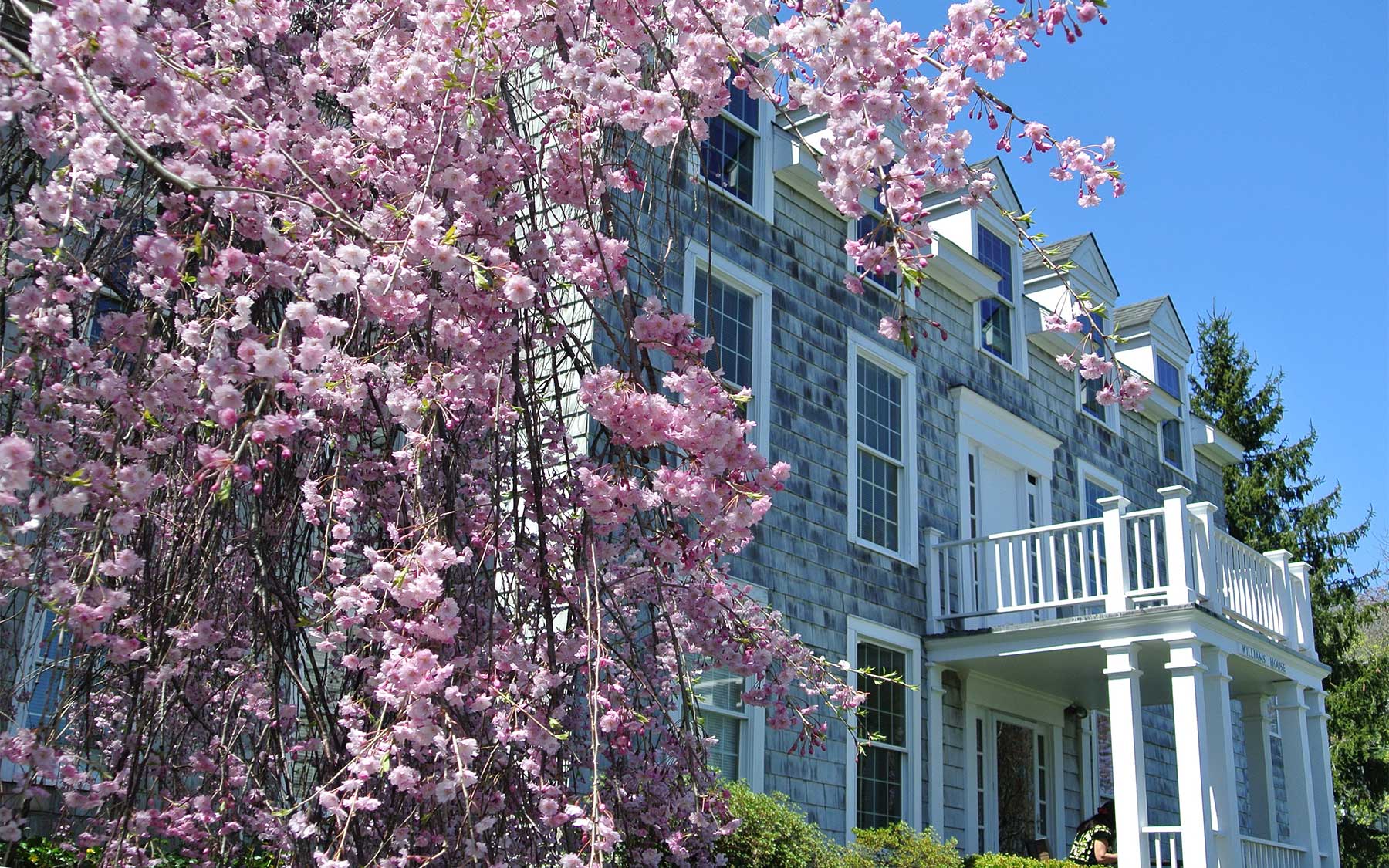 Cherry blossoms on campus at CSHL.
email envelop icontwitter icon share buttonfacebook icon share buttonlinkedin icon share button
Weather forecasting technologies and clairvoyant groundhogs are among the tools that we humans use to predict when spring will arrive. When colorful flowers and foliage burst from plants, we finally know it is here. But how do plants know that it is time to put out spring flowers?

Plants have no nervous system to feel the warming temperatures, nor do they have eyes to see that the days are getting longer. They do have their own forms of each of these senses, however, explains Assistant Professor Ullas Pedmale. They use both temperature and day length to figure out when it is time to flower, because, he says, this is such a big decision that “they want to be doubly sure.”

Pedmale’s lab studies how plants respond to their environment, which “is very important because plants cannot move around, so the environment has a tremendous impact on their growth and survival.”

In this episode of CSHL’s Base Pairs podcast, Professor Zachary Lippman talks about how he used CRISPR gene editing to create an early-flowering tomato variety that is better suited to handle the challenges of climate change.

A few days of early warm weather is not enough to fool plants into flowering, because they can tell that the days are still short. It is similar to how humans use multiple senses to gain an extra level of certainty, Pedmale says. He likens the process to a person testing a freshly painted wall: “You can tell visually that it’s dry, but you’ll also go and touch it to make sure that it’s not tacky.”

The equivalent of vision in plants is remarkably sophisticated. While a human will see sunlight as white, a plant “has eyes to see all of these different colors” within sunlight, says Pedmale. The human eye senses different colors of light using structures called photoreceptors. Plants have their own set of photoreceptors embedded in their leaf cells, some of which enable them to see colors that we cannot. For example, “far-red light is something that we cannot see, but plays a major role in flowering,” according to Pedmale.

Far-red light warns plants about other plants are around them, which snatch the sunlight and other precious resources. The more neighboring plants, the higher the proportion of far-red light. When a plant senses high levels of far-red light and realizes that it has competition nearby, “it’s going to start growing taller to capture light, flower early, and produce less seeds so that it can finish its life cycle,” Pedmale says.

This “live fast, die young” approach is called a shade avoidance response. In agriculture, it is a “major problem, because it reduces crop yield,” Pedmale explains. By studying how plants use information about light and other aspects of their environment to direct their growth, he hopes to find ways to minimize unfavorable shade avoidance responses in crop plants. We may dream of early flowers as a long winter drags on, but Pedmale’s research reminds us that our very lives depend on plants getting that timing just right.

Plants fight for their lives

Flowers don’t just catch our eyes, they catch those of pollinators like bees as well. They have to, in order to reproduce   Read more »